“I was afraid that if I hurt myself, it would cost me a lot of money,” said the 29-year-old, who enjoys playing soccer, running and surfing. 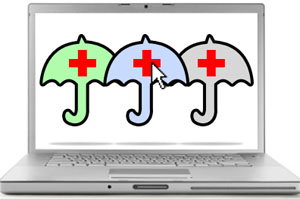 He consulted a broker at one point, bought a temporary plan to help buy him some time and browsed through Covered California, the state-run insurance shopping site, for a low-cost plan. After about 10 minutes on that site, he gave up.

“It was a disaster trying to find what was good for me,” he said. Leep wanted to know if he could still see his doctor, how much getting injured would cost him, and what he’d be spending over the next year.

After using a startup insurance broker service called Stride Health, he had a recommendation in minutes: a catastrophic plan that cost approximately $200 a month.

“This is really promising and exciting to me,” he said. “It’s a new approach to finding health care coverage and getting care.”

Stride is among a handful of companies in the country capitalizing on what many consider a failing of the federal and state health insurance marketplaces: a lack of quick recommendations tailored to consumers’ specific needs. These commercial companies are aiming to augment government sites such as healthcare.gov by offering the sort of on-demand, personalized results that people have come to expect on the web from the likes of Google and Amazon.

“That’s what people are going to want in health care, too,” said Joel Ario, a health care consultant and the former director of the office of health insurance exchanges at the Department of Health and Human Services. “Whoever figures out first how to meet that kind of consumer demand, they’re going to be the successful vendor in the marketplace.”

Stride, which operates only in California but hopes to expand, pumps out its recommendations using algorithms based on earlier customer feedback, proprietary information from insurers and government data.The calculations do not include data on quality, outcomes, and customer satisfaction, partly because that information is difficult to get and can be subjective.

The approach builds on a business model spearheaded by eHealthInsurance, a web-based insurance broker that has been around more than 10 years and helps guide consumer decisions using data collected from insurers and customers through its own platform.

Stride and eHealthInsurance, both for-profit companies, make money by charging insurers a commission when plans are purchased.  At least one organization, the nonprofit Consumers’ Checkbook, provides a free assessment, like Stride’s, of options for consumers in Illinois based on actuarial data the organization has collected. Customers put in where they live, their age, expected medical expenses, and the names of doctors they want to see. The system calculates a person’s expected annual costs and lists the plans from cheapest to most expensive.

The lack of a reliable, independent option for the rest of the country is “very troubling,” said Robert Krughoff, the president of Consumers’ Checkbook. “There’s been all of this talk about the technical glitches, but those won’t cost people the money that these bad decision tools are going to cost them.”

He worries that relying on for-profit companies could introduce bias in the recommendation process — a critique the for-profits dismiss.

Stride, eHealthInsurance and other companies claim their search engines don’t factor in commissions from insurance companies, which can vary. And there are some federal regulations that prohibit services from ranking plans based on commissions, but that only covers e-brokers that sell plans listed on the federal online marketplace, healthcare.gov.

“How it’s being policed or enforced, I’m not sure,” said Timothy Jost, a consumer health-law expert at Washington and Lee University School of Law.

Stride’s approach differs from eHealthinsurance, which aims to help consumers narrow their choices. Initially, eHealthInsurance presents consumers with “featured plans,” which the company says are based on popularity and user reviews. To get a full list of plans available on the site, customers need to click a separate link and wade through ads for promoted plans. After clicking on a series of questions and preferences, it’s up to consumers to decide which plan is best.

Stride’s algorithm makes clear recommendations. It does so by comparing personal data consumers provide — such as age, gender, illnesses, medications, doctors they want to see and smoking habits — against information troves that include the U.S. Food and Drug Administration’s drug database and claims data collected by the Centers for Medicare & Medicaid Services.

The top pick is labeled “best plan,” and the next “runner up.” Stride also gives consumers the option of going without insurance, but labels it a “risky move” that carries a federal fine. That option wouldn’t make the company any money, but CEO Noah Lang says it’s important to give consumers a full range of choices.

The system lets users see which plans their specific doctors accept and how scenarios like sports injuries, heart attacks or asthma might affect their out-of-pocket costs. Stride updates the cost estimates — and rankings — for each plan as consumers play with their preferences and put in more information.

“They’ve used data sets that have been out there for a while and built them into an incredibly useful consumer application,” Bryan Sivak, chief technology officer at the Department of Health and Human Services, said about Stride. “How many times have we signed up for various insurance plans without knowing what we were getting into beyond the monthly premium? They’re just at the tip of the iceberg on this.”

For Stride, as with some other e-brokers, cost seems to be the most important factor driving how plans are listed.

Plus, the selection of plans available may not be comprehensive. The “best plan” recommendation hinges on what contracts Stride has made with insurance companies.

“I wouldn’t make a web-based broker your only source of information because they’re going to show you only a subset of plans, and they may emphasize the ones that make the largest commissions,” said Lynn Quincy, the Consumers Union’s associate director for health reform policy. “The marketplaces [like healthcare.gov and Covered California] are neutral.”

Leep says he is satisfied with his experience on Stride. “It felt a lot like TurboTax. It very simply walks you through what you need to do next,” said Leep, who learned about Stride from Lang, the CEO who was also his college classmate.

Stride’s algorithm, for which the company has filed a patent, quickly gave Leep a list of options. For each, Stride calculated Leep’s projected annual costs, monthly payments, the deductible and how much he’d pay for doctor visits and medications. From beginning to end, the process took 10 minutes.

On healthcare.gov finding the information — total annual cost, quality, and the doctors available with a given plan — still requires people to sift through pages of information scattered across different web pages.

But the service is not much help for consumers eligible for government subsidies under Obamacare. Covered California, doesn’t partner with any e-brokers yet. Officials recently suggested that could soon change, but for now, California residents have to buy health plans through Covered California or the insurer to get a government subsidy. If they buy the same plan through a service such as Stride, they would lose out.

Yet even eHealthInsurance, one of a handful of companies that has partnered with the federal government on healthcare.gov, says that its efforts to sell to consumers getting subsidies has been very slow. The consumer experience isn’t “yet a stable, easy to use and scalable solution,” according to the company.

Most customers still have to bounce back and forth between the broker and healthcare.gov, to sign up. That’s partly because the government hasn’t fully implemented the technology that syncs e-brokers with the databases used to verify that consumers qualify for financial assistance.

“Nobody that I know has an exact bead on how it’s going to work or when it’s going to be ready,” said Ario, who now works for Manatt Health Solutions.

While the federal and state governments sort things out, tech outfits are free to hone their algorithms and improve their services for the next round of open enrollment beginning Nov. 15. Healthcare.gov and state sites may be forced to integrate some of the private-sector concepts but won’t get into the business of making recommendations.

“These kinds of tools are going to become really valuable because figuring it all out on your own is too painful,” said Bob Kocher, a partner at venture capital firm Venrock and a former special assistant to President Barack Obama for health care on the National Economic Council.

“Consumers should be cautious when giving up their personal [health] information,” said Quincy of the Consumers Union. “Health plans…might be in the mood of trying to avoid bad risks or unhealthy people even though it’s illegal. You’re giving a health plan a lot of useful information when you tell them ‘I’m diabetic’ or ‘I need HIV drugs.’ ”

Stride’s Lang stresses that the company “does not provide your private health data to any insurance carriers. We only use it to help you make a smarter decision on the best plan for your health profile.”

This article was updated at 2 p.m. to add a statement from Stride CEO Noah Lang to make clear that the company does not provide customers’ personal health data to insurance companies.