President Barack Obama’s budget proposals cause a lot more heartburn for pharmaceutical manufacturers than the $80 billion in fees and other concessions over 10 years that the industry agreed to as part of the Affordable Care Act negotiations, says John Castellani, who heads the Pharmaceutical Research and Manufacturers of America (PhRMA).

In an interview with KHN’s Mary Agnes Carey, Castellani talks about the rollout of the federal health law, the sequestration cuts to federal spending and the president’s budget. He  says Obama’s plan to reinstate  drug industry rebates for “dual eligibles,” low-income and disabled individuals who qualify for both Medicare and Medicaid and who have drug coverage under Medicare, would mean that other Medicare beneficiaries pay more for drugs under Part D, a charge other analysts dispute.

An edited transcript of that interview follows.

Q: There’s a lot of discussion these days about implementation of the Affordable Care Act. Do you think it will roll out smoothly?

A: We look at a unique part of it, the construction of the exchanges and what the medicine benefit is going to be for those people who participate in the exchanges. 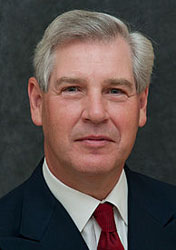 I don’t expect the Affordable Care Act will be perfect in its first iteration and its rollout. I hope we can get to a point for a lot of issues – not just the rollout of the exchanges – where we can look at what could be improved and have a political environment where we could talk about it. Right now we’re not there but there are a lot of things that need to be improved in the act.

Q. Do you have specific concerns?

If I had a concern, I’d be most concerned about the potential for close-in geographic dissimilarities. You may have a state that has implemented a robust exchange, with a good selection and good participation of plans. And across the river, for example, just as a wild guess, have a state that chose not to and just go into the federal exchange.

Given the mobility of the population, particularly in metropolitan areas, I think that’s potentially an area for confusion and maybe a little more friction than might otherwise exist. But I think it’s going to be a wait and see. Everybody is moving quickly. There are lot of rules have to be implemented, guidance has to be given. It’s a big task.

Q: In predicting how things will go with ACA implementation, some analysts are saying the 2006 implementation of the Medicare prescription drug benefit, or Medicare Part D, holds many valuable lessons. What do you think?

A: I remember in 2006 when everybody thought this was so complicated, this was going to be absolute chaos in the market. People wouldn’t be able to understand it. We had to have a very aggressive outreach. It turned out to be very manageable, very understandable. Not all was perfect at first, but it got better.

I think [ACA implementation] is more complicated than Part D. Yet I learned a long time ago I’m not very good at betting how things are going to turn out. I may be the only person you ever have met who lost money on Secretariat, who only lost one race after he won the Triple Crown. And that’s the [race] I bet on.

Q: The medical device industry is lobbying Congress to repeal the health law’s tax on medical devices. Is PhRMA trying to get some of the ACA fees on your industry fees removed?

A: We have other concerns that are out there in front of us: mostly the budget proposal the Obama administration has made. It would extract somewhere around $200 billion more from this industry through the so-called dual eligible rebates, and shortening of the data exclusivity period  for biologics [drugs that are made through biological processes not chemical manufacturing like traditional drugs] and strengthening the Independent Payment Advisory Board [a panel set up by the health law to force Medicare to keep costs down], which is the one everybody agrees has to change in the legislation. These proposals would do serious harm to our industry. The administration keeps coming back for more.

Q: What changes would you like to see in the ACA?

A: We didn’t do delivery reforms in the Affordable Care Act, the kinds of things that are much more beneficial for patients and payers, which is the emphasis on wellness, on prevention, on [disease] management, those things that will avoid acute care. There’s not enough in there. They are experiments. We are still fighting the battle in a fee-for-service system.

Q: Before the duals were moved into Medicare Part D, the drug industry paid rebates for these individuals. In this era of deficit reduction, why shouldn’t the industry do that again?

A: Medicaid is an income-based health program and Medicare is age based. Medicaid is a big purchaser and gets big discounts. But look at the results: there is limited access to medicines and formularies. Douglas Holtz-Eakin, a former Congressional Budget Office director, has found in a study premiums may go up by about 25 to 40 percent in the Part D program [under the rebate proposal]. The Part D program is working. It is saving money.

Q: What is PhRMA willing to do for deficit reduction? What will you come to the table with?

A: One of things we and others have pointed out to Congress is there’s a tremendous benefit and savings – it has been estimated to be between $100 billion and $300 billion – in just getting people to take the  medicines they’re prescribed, adherence. For congestive heart failure alone, it’s been estimated $22.4 billion over the next 10 years. People say that’s self-serving. Eighty-five percent of that is generic [not brand-name drugs]. You cannot cut your way to good health and you cannot cut your way to savings if you push these costs down the road.

Q: Is sequestration, a series of automatic spending cuts, better than an unknown deficit deal?

Q: The Medicare Part D program is the fastest-rising part of Medicare spending. Do you think it’s a target for deficit reduction?

A: No, I think that would be short-sighted. Just saying there must be something out there so I’ll take x billions of dollars out and you guys go figure it out [makes no sense]. Those policies have consequences and you have to think them through. If they’re not well thought through, if they don’t focus on the long-term impact of them, you end up with less research and development.