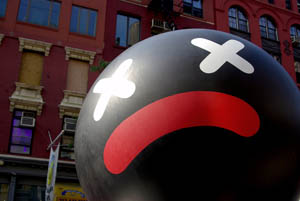 As Medicare moves with plans to pay hospitals in part by how well they score on reviews by patients, hospitals in low satisfaction regions such as New York have been complaining that their patients are harder to please. Those arguments, however, aren’t going over well in places like Iowa where patients tend to be more positive about their inpatient experience.

“New York, State of Whine,” was the title of a piece the Iowa Hospital Association recently published on its web site. The posting observed:

The implication seems to be that you can step all over patients anywhere else, but only those persnickety New Yorkers will actually hold you accountable when Medicare asks them how things went and starts withholding payment for hospitals that fall short.

Don’t tell that to Bob Peebles, who helped run hospitals in New York City and Detroit before becoming CEO at Mercy Medical Center-Sioux City.  “I don’t buy it, not for a minute,” said Peebles, whose stint in NYC put him about 10 blocks away from the World Trade Center on the morning of Sept. 11, 2001.  “Patient expectations are the same wherever you go.  But that’s not really the point – the point is, what do you expect from your staff, and how well is that being communicated?”

In other states, hospitals are bracing for Medicare’s new emphasis on patient experience in setting payment. An executive at the Georgia Hospital Association told Georgia Health News that in places like Atlanta, where “hospitals have been using patient satisfaction scores to compete with each other,” connecting these scores to payments “takes it to another level.”

New York isn’t the only state where hospital officials are unhappy with Medicare’s plan.  In Florida, where hospitals fare relatively poorly on the patient surveys, Dr. Scott Medley, North Florida Regional Medical Center chief medical officer, told the Gainesville Sun that Medicare is emphasizing the wrong scores. “I’m not sure the patient survey is the best measure of patient satisfaction,” he told the Sun. “We might have chosen different questions,” he said.