The Obama administration Tuesday granted Iowa much of what it requested to move forward with a Medicaid expansion through the use of private insurance plans but refused to allow the state to charge premiums for those who earn less than the federal poverty level.

If the state accepts the terms of the agreement, it would become the second to be allowed to use federal dollars to finance the purchase of private health insurance for the newly Medicaid eligible.  Arkansas was earlier granted that permission by the Centers for Medicare & Medicaid Services (CMS). 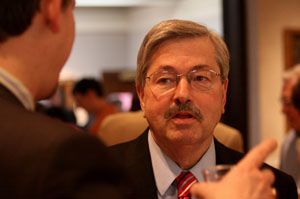 Iowa was among the states that refused to expand Medicaid eligibility under the health law after the Supreme Court ruling made the move optional, but Republican Gov. Terry Branstad and state Democrats reached an agreement last spring that would send many of those new members to private health plans. The state then submitted a Medicaid waiver request to the federal government.

Under the agreement announced Tuesday, those above the poverty line would pay a small portion of the premium, but the administration said the state could not charge those below the poverty line, which is currently about $11,490 for an individual or $19,530 for a family of three.

Consumer groups and some policy experts said charging a premium for those below the poverty line  would set a bad precedent. No other state charges those enrollees. About 40 states allow for limited premium payments for some residents above the poverty level, according to CMS.

“Premiums for people under poverty is a line that CMS cannot cross,” said Joan Alker, executive director of the Center for Children and Families at Georgetown University Health Policy Institute.

“Iowa has pioneered innovative, state-based solutions for Medicaid expansion, and we are pleased to grant this waiver,” said CMS Administrator Marilyn Tavenner in a press release.  The expansion is expected to affect about 100,000 Iowans.

Even before winning approval, Iowa began allowing residents to sign up for the program.