A man who may have had contact with 100 other people is in isolation at a Dallas hospital after being diagnosed with Ebola, a deadly virus that has killed more than 3,000 people in West Africa. Two weeks ago, El Paso officials said more than 700 infants may have been exposed to a hospital aide with tuberculosis. And in July, the first case of chikungunya, a virus spread by mosquitoes, arrived in Texas. 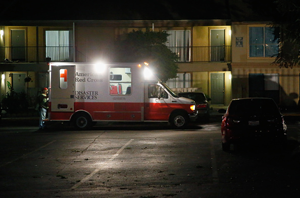 Volunteers from the Red Cross deliver blankets and other supplies to a unit at the Ivy Apartments, where the confirmed Ebola virus patient was staying, on October 2, 2014 in Dallas, Texas.(Tom Pennington / Getty Images)

State officials say Texas’ response teams are well-equipped to handle these cases and other potential public health crises. But the surge of recent threats here is raising questions from public health experts, who say they are worried about the state’s capacity to deal with more contagious diseases as they arise.

“We don’t really have a unifying construct for public health in Texas that’s comprehensive,” said Dr. Eduardo Sanchez, the former commissioner of the Texas Department of State Health Services (DSHS) and current chairman of the Texas Public Health Coalition. “The system is not as connected as it could be.”

At a Wednesday press conference to discuss the Ebola case, Gov. Rick Perry said he was confident in the state’s preparedness. “There are few places in the world better equipped to meet the challenge that is posed in this case,” he said. “We have the health care professionals and the institutions that are second to none.”

Current DSHS Commissioner David Lakey said local health departments are capable of taking the lead in tracing other possible cases with help from the state.

But public health experts argue that the state’s response system is “fragmented” and vulnerable to local budget cuts, which they say could hamper crisis-response efforts in the case of diseases that are more easily transmitted.

Texas’ local health departments, which provide services like immunizations and disaster response planning, operate autonomously and are funded primarily by local taxes but may be supplemented by state and federal grants. Because local health departments are not held to a single standard, their services and budgets vary tremendously around the state.

A report critical of the state’s public health system, prepared by the Sunset Advisory Commission, found that “the roles and responsibilities of DSHS and local health departments remain undefined.” The Sunset Commission is tasked with highlighting inefficiencies at state agencies and recommending legislative action.

“A ‘local health department’ can be a few staff conducting restaurant inspections and animal control duties, or a large agency directing sophisticated disease surveillance, operating a public health laboratory and providing direct services to citizens,” according to the report.

Some public health officials have criticized the state’s model as disjointed. Many local health departments operate independently; however, if local budget cuts to a public health department force it to discontinue a health service, DSHS is often required to step in and take responsibility for that service. The state is then left to foot the bill.

“In the event of a public health emergency … the resources necessary to adequately respond to that are not all in the control of the health department,” Sanchez said. “You have to have the money and the authority — whether it’s informal or formal — to actually lead a response and take care of business.”

Local entities have slashed funding for health departments in recent years, said Catherine Troisi, an epidemiologist at the University of Texas School of Public Health in Houston. Thirty-six percent of local health departments in Texas laid off staff as a result of budget cuts between 2008 and 2013, according to the National Association of County and City Health Officials.

“I think it’s fair to say that it’s sort of a haphazard relationship,” said Tom Banning, chief executive of the Texas Academy of Family Physicians. Local health departments often complain that they are understaffed during crisis situations, he added.

Joseph McCormick, dean of the University of Texas School of Public Health’s Brownsville campus, said the state’s experiences with airborne diseases had exposed difficulties in the system. During the 2009 outbreak of the H1N1 virus, he said, many local health departments were unequipped to effectively reach out to their communities.

“The ability to communicate with the communities at the local level was not very good,” he said. “I’m not sure that’s improved.”

DSHS officials have said that local health departments often take the lead in responding to viral diseases, with the state agency playing more of a supportive role and providing supplemental resources to local responders.

“The Texas model requires a high level of collaboration and coordination between the state and [local health departments],” according to DSHS’ response to the Sunset Advisory Committee report.

DSHS oversees coordination efforts between state entities and federal health officials. In the current Ebola case, DSHS requested help from the federal Centers for Disease Control and Prevention, which dispatched a team of investigators to Texas. DSHS also operates the state public health lab in Austin, where the current Ebola case was confirmed.

The role of the Texas Health and Human Services Commission, which oversees DSHS, is primarily to monitor the situation, according to commission spokeswoman Stephanie Goodman.

While state officials have emphasized that the Dallas Ebola diagnosis is extremely unlikely to lead to an outbreak of the virus, the high-profile case has pushed the state’s public health infrastructure into the limelight. Public health experts say they hope the attention will spur lawmakers to re-evaluate the system.

“This is an opportunity to talk about it,” Riggins said.

Is Texas Prepared for a Public Health Emergency?

By Edgar Walters and Alexa Ura, The Texas Tribune October 3, 2014