Harriet Kelly has one word to describe the day she stopped driving four years ago: miserable.

“It’s no fun when you give up driving, I just have to say that,” she says. 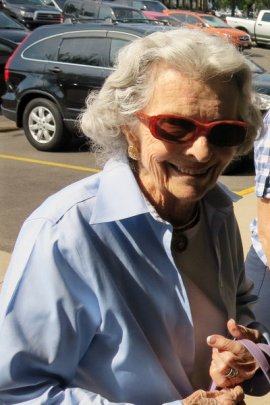 Harriet Kelly, of Denver, says she hasn’t had even a fender bender since the 1960s. Still, she noticed in her 80s that her eyesight was starting to decline. So she made a plan to stop driving at 90 — and did just that. (Photo by John Daley/Colorado Public Radio)

Kelly, who lives in Denver, says she started to notice her eyesight decline in her 80s. She got anxious driving on the highway so she decided to stop before her kids made the move for her.

“I just told them I’d stop driving on my birthday, my 90th birthday, and I did. And I was mad at myself because I did it,” she says, laughing. “I thought I was still pretty good!”

Kelly is now 94. She says her last accident was in the 1960s.  But, she says, “I think it’s just better to make up your own mind than have your kids go through trying to tell you and end up with arguments and threats and everybody gets mad.”

Her daughter Leslie Kelly says she’s grateful she and her siblings didn’t have to have that tough conversation. Still, she knows it’s been tough for her mom.

“It really cut down on her ability to feel independent,” says Leslie.  Harriet chimes in, “It certainly did!”

But Kelly is a great example of planning for a “driving retirement,” says Dr. Emmy Betz, with the University of Colorado School of Medicine.

“Retirement is something that happens to all of us. Maybe we even look forward to it. You prepare for it, you make financial plans, you think about what you’re going to do,” she says.

But she says most seniors don’t do that when it comes to driving.

“It’s sort of the elephant in the room that no one wants to talk about, but it’s an issue that’s coming for most of us and our family members and so denial isn’t probably the most helpful option,” she says.

“Transportation is a huge issue that we need to address,” says Jayla Sanchez-Warren, director of the Area Agency on Aging for the Denver Regional Council of Governments. For seniors, she says, a lack of transportation also “contributes to so many other things, like poor health care outcomes, isolation, and depression.”

A recent report by the AAA Foundation for Traffic Safety and Columbia University found older adults who give up the keys are nearly two times more likely to suffer depression than those who keep driving.

In my own family, we’ve had to confront the issue twice.  When my dad talked to my grandmother, she hid another set of keys and drove secretly until they found out. Then, 30 years later, “hell” and “no” were just two of the choice words that erupted from my dad when an Alzheimer’s diagnosis prevented him from driving any more.

Betz urges families to plan ahead, talk about it years before it happens and map out transportation alternatives.

“Imagine if I told you to give me your keys and you can no longer drive, starting right now,” she says. “I mean, what would you do?  It’s totally unrealistic that we think that that’s an OK thing to do to older people.”

It will become an issue in lots of families. Nationally, until 2030, 10,000 Baby Boomers will turn 65 each day.  Drivers can get a discount on their insurance by taking a driver safety class.

At a senior center just outside of Denver, Chris Loffredo teaches just such a class. She asks the 20 attendees to think about everything from how medications might affect them to how new technologies in cars may help them.  And, she wants them to strategize. 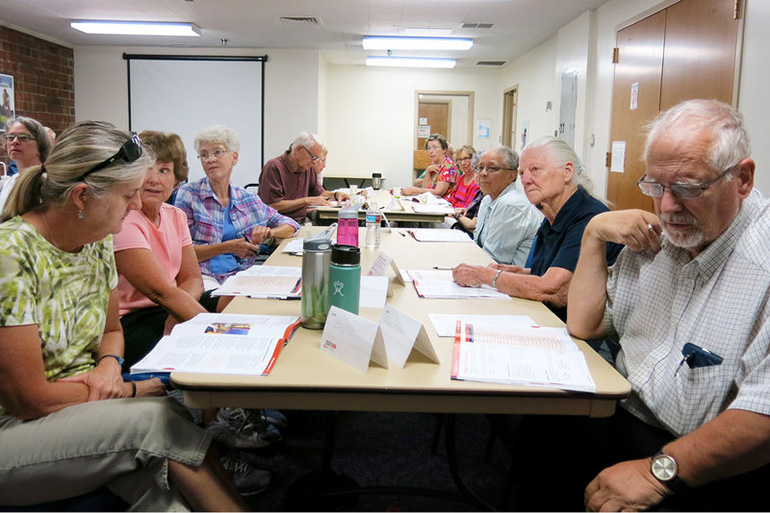 Driver safety classes, like this one offered by AARP in Aurora, Colo., include discussion of ways to minimize blind spots and the effects of medication on driving, along with a review of road rules. (Photo by John Daley/Colorado Public Radio)

“You have to know when to give up your keys!” she tells them.

But not a hand goes up when the group is asked if they’re ready to talk about that. After the class, retirees Ralph Bunge, who is 72, and his wife, Paula, who’s 67, say they’re not ready.

“The conversation wouldn’t be so difficult,” laughs Ralph.  Paula agrees, “We’re just not really at a place where we imagine that that decision is going to be made any time soon.”

Harriet Kelly says she’s made adjustments since giving up the keys four years ago.  She now hires a companion or Uber to take her on errands. She also gets rides from friends, but, she admits, “[There are] fewer and fewer people that I’ll drive with in their 80s, I must say that.”

In fact, says researcher Betz, if older drivers present a danger it’s mostly to themselves and their passengers. She says fatal crash rates are higher for older drivers, mainly because they don’t heal as well after a crash.

This story is part of a reporting partnership with NPR, Colorado Public Radio and Kaiser Health News.

It’s Never Too Soon To Plan Your ‘Driving Retirement’