ANCHORAGE, Alaska — When Andy Hawk needed hernia surgery last year, his biggest worry wasn’t the operation’s cost — it was whether he’d heal in time to lead a spring bear-hunting expedition on Kodiak Island.

For the first time, the self-employed gunsmith in the state with the nation’s highest medical costs and most volatile insurance market had some protection. He had coverage for all but $10,000 of the $45,000 tab.

“Before that, I was just damn lucky,” said Hawk, 52, who joined the Affordable Care Act marketplace in 2013.

But neither Hawk nor his girlfriend, Jennifer Jolliffe, 55, a self-employed acupuncturist also covered under the ACA, is resting easy.

The couple was relieved last month when Republican congressional leaders hastily withdrew the American Health Care Act, a GOP bill described by Sen. Lisa Murkowski (R-Alaska) as “a flawed replacement” for Obamacare, the common name for the ACA.

The bill’s failure left Obamacare intact while Republicans regroup on how to address rising insurance costs and other weaknesses with health care delivery. The issues are particularly acute in Alaska, the fourth most expensive state in the U.S., where a standard knee replacement might cost five times what it does in Seattle and pricey air ambulance rides are common in emergencies.

Individual health insurance premiums here climbed almost 40 percent annually after the ACA went into effect, and high health care costs drove all but one provider, Premera Blue Cross Blue Shield, out of the market in 2017.

Now, Hawk and Jolliffe are watching closely as state leaders grapple with preventing the online marketplace from collapsing in Alaska. Officials are seeking a $51.6 million federal waiver to shore up the individual insurance market.

“I just want everyone to have health insurance,” said Jolliffe, who suffered a life-threatening bacterial infection in 2009 that for her underscored the need for coverage. 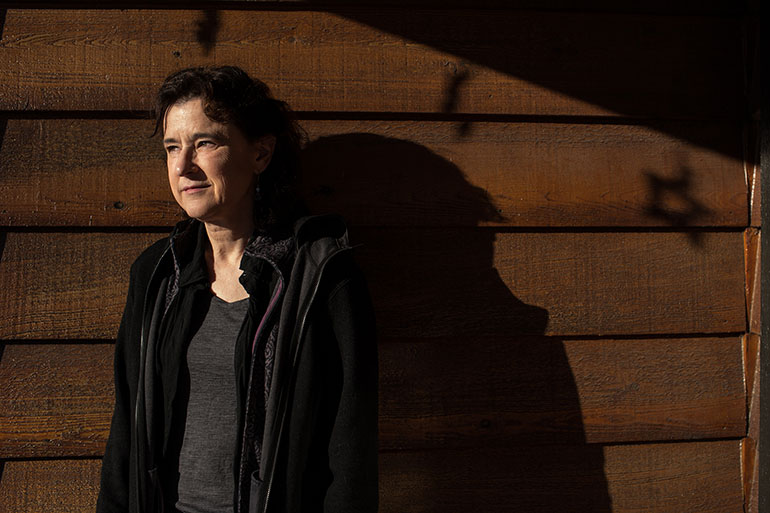 Jennifer Jolliffe, 55, an acupuncturist, works from home with Hawk. Both receive health care coverage through the ACA and are concerned about what a GOP plan for health coverage would mean for them. (Ash Adams for KHN)

Most of Alaska’s more than 738,000 residents receive health insurance through employers or government programs. About 30,000 obtained insurance under the Medicaid expansion in 2015 enacted under the ACA — the health law that was largely opposed by the 51 percent of Alaska voters who voted for President Donald Trump.

Even fewer residents buy insurance on the ACA’s marketplace. In that small private insurance pool, rates have soared because health insurers in the vast but sparsely populated state couldn’t sign up enough healthy people to offset costs for high-risk patients with expensive conditions such as end-stage renal disease and cancer.

Premera reported that last year it paid about $67 million in claims for individual members on the Alaska exchange, but about a quarter — more than $16 million — came from just 20 patients.

“Alaska has been quite a story over the last few years,” said Premera spokeswoman Melanie Coon. “It’s not like other states.”

With the market approaching collapse, Alaska lawmakers tackled the problem last year in a novel way, said Eric Earling, a senior vice president with State of Reform, a nonpartisan health policy communication group with a focus in the West.

State officials voted to levy a 2.7 percent tax on all insurers to create a $55 million reinsurance fund that covers bills for high-cost patients, stabilizing the individual market for the rest of the customers.

“The reinsurance program could be a model for others across the U.S.,” he said.

In the short run, it worked. Instead of an expected premium increase of more than 40 percent for 2017, Premera’s rates rose just 7.3 percent, Coon said.

The insurer reported March 29 that it made $20 million in the individual market in Alaska in 2016. That figure included $4 million in direct profits, $8 million in adjusted income carried over from 2015 and $8 million in federal risk adjustment funds, which help compensate insurers for enrolling high-risk patients, according to Jim Grazko, president of Premera’s Alaska operations. The new report cuts Premera’s losses in the state’s individual market through the ACA from more than $25 million to about $7 million over three years, he said.

Still, premiums remained the nation’s highest, $904 a month for a 40-year-old nonsmoker in Anchorage on Premera’s second-lowest silver plan, which sets the benchmark for subsidy levels. Enrollment on the Alaska individual exchange fell from about 23,000 people in 2016 to about 19,145 this year, according to the Centers for Medicare & Medicaid Services.

“I think we lost about 3,800,” said Lori Wing-Heier, director of the state Division of Insurance. “Some of them just could not afford it.”

The reinsurance fund — approved by a Republican-dominated Legislature and signed by an independent governor — was a one-year deal designed to prevent the state’s insurance market from imploding. 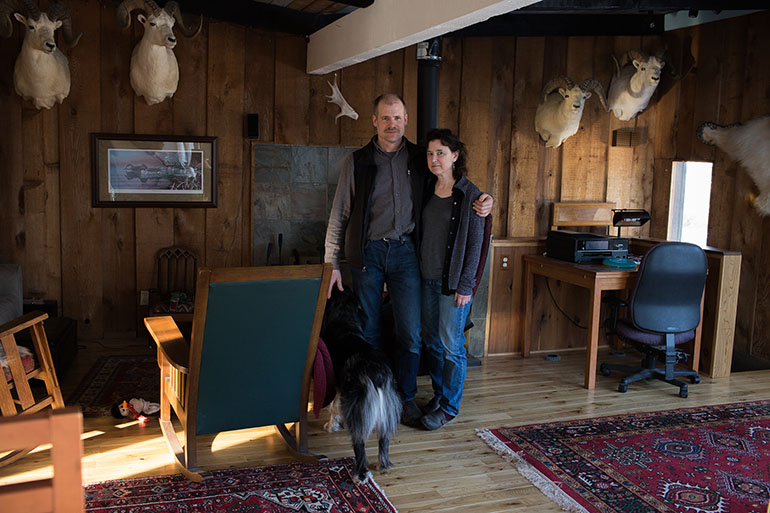 Hawk, pictured at home with Jolliffe, says that before he joined the ACA marketplace in 2013, he “was just damn lucky.” (Ash Adams for KHN)

For a longer-term solution, state officials in December submitted a proposal to federal health officials known as a Section 1332 waiver, which allows states to seek “innovative strategies” for providing insurance. Alaska is asking that the federal government funnel $51.6 million that would have been paid for premium subsidies in 2018 into the reinsurance program. It would be authorized for five years, with a renewal option.

Such waivers have been encouraged by new Health and Human Services Secretary Tom Price, and Wing-Heier said she expects it to be approved “quite quickly” after state legislators tweak final language.

“It is a way of stabilizing the ACA in Alaska,” said Wing-Heier, who emphasizes that cutting health care costs is also crucial.

“Healthcare is broken as it is today,” Young said in a March 21 press release that detailed his reservations. “We’ve seen the numbers — skyrocketing premiums, soaring deductibles and the loss of all but one insurer. Ultimately, I support efforts to repeal and replace the Affordable Care Act, but I also recognize that it’s very difficult to put the toothpaste back in the tube.”

Murkowski called the push for the AHCA “a reckless repeal process” and vowed that she wouldn’t support plans to cap federal funds for Medicaid that could endanger the newly insured.

“I don’t support pulling the rug out from people who have received coverage,” she said in a Facebook Live town hall on March 23. Murkowski has also opposed efforts to strip federal funding for Planned Parenthood.

Alaska has been quite a story over the last few years. It’s not like other states.

That was welcome news to people like Cindy Stark, 61, who runs a small sewing and embroidery business outside Anchorage and gained health insurance through the state’s Medicaid expansion. She was badly injured in horse-riding accidents in 2003 and 2008 and had previously struggled to pay a $950 monthly premium and $5,000 deductible with private insurance. She hopes that recent efforts to cap Medicaid funding, possibly cutting enrollment, are over.

“I have asthma and the chronic pain,” said Stark, who voted for Hillary Clinton in the 2016 presidential election. “My medicine now keeps me on track.”

But constituents such as Sam Trotzke, 48, a partner in an accounting firm in North Pole, Alaska, criticized Murkowski, whom he called “a Democrat in Republican’s clothes,” for not working harder to repeal Obamacare.

Trotzke turned down his firm’s insurance in favor of a Christian health care sharing ministry called Medi-Share. It’s one of several growing programs across the U.S. in which medical care is paid for through monthly payments — called “shares” — of faith-based followers.

Wing-Heier estimates that such programs have become popular with some Alaskans on the wrong side of the ACA’s “subsidy cliff,” a reference to the cutoff for federal premium subsidies at 400 percent of the poverty level.

Instead of more than $2,600 a month in health insurance premiums, Trotzke said he pays $634 for coverage for himself and his wife, Shauna, 44, and their daughters, Tessa, 12, and Anna, 8. Preventive care, dental visits and eye appointments come out of his pocket.

With the cost-sharing plan, Trotzke said he feels as if he has more control over his health care spending. He’d like to see the ACA repealed and replaced with a plan with fewer regulations.

“It’s our overlords in Washington, D.C., dictating to us how we have to run our business,” he said. “That just rubs me the wrong way.” 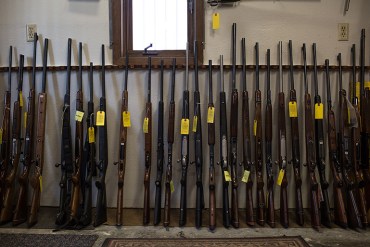 Guns, finished and in progress, line the walls of Hawk’s gunsmithing shop. (Ash Adams for KHN)

Back at the Anchorage gunsmith shop, where custom rifles and rebuilt shotguns line the walls beneath moose antlers and a wolverine pelt, Hawk has a different take.

The ACA isn’t perfect, he said, but the insurance plan means that he and Jolliffe can lead active Alaskan lives — hunting, fishing, skiing — without worrying about costs of a medical catastrophe.

Hawk, a Clinton voter, worries about Trump’s vows to “let Obamacare explode” and said he fears the administration will go out of its way to undermine the health care law — even without a full repeal.

“We don’t smoke, don’t drink, we’re doing our part,” said Hawk, who added: “I don’t understand why they couldn’t just fix it.”

‘It’s Not Like Other States’: High-Cost Alaska Sits In The Eye Of Health Reform Storm