Toward the bottom of the tax form most Americans fill out each year, just beneath a line for payments for maids, nannies and other household staff, there is a new line marked “health care: individual responsibility.”

Line 61 on Form 1040 comes from the Affordable Care Act, which last year started requiring most Americans to have health insurance or pay a penalty. But the law routed the penalty — and subsidies that help pay for insurance — through the tax system, assigning major new responsibilities to the Internal Revenue Service, an agency struggling with a shrunken budget, diminished staff and plummeting levels of customer service.

At a time when people still may be asking what health insurance has to do with their taxes, those seeking help from the IRS this tax season face historically long telephone holds, slow written responses and limited in-person help, according to the Taxpayer Advocate Service, an organization representing taxpayers inside the IRS.

The IRS has warned that the combination of new work and fewer employees could delay refunds. A miscalculation on health-related forms sent to 820,000 people is already delaying refunds for many. The IRS didn’t make the mistake, but the incorrect forms contain information people are supposed to report on their taxes, creating confusion. Some tax experts worry that more mistakes could be on the way as the agency processes millions of new forms.

“Overall, I do not believe they’re as prepared as they could have been,” said Kristy Maitre, an Iowa tax specialist who ended a 28-year career at the IRS last year, when she was a liaison to tax preparers for the agency. “I think there will be issues, but we aren’t going to know what those are until we get to the end of the filing season.”

Most of the country’s 150 million taxpayers just need to check a box on their tax form indicating they had coverage last year. No one needs to send proof of insurance. Insurers and employers were supposed to submit proof this year that the peoplethey covered were insured, but that requirement was delayed until next year, according to the IRS website.

But there are additional filing requirements for about a quarter of taxpayers, according to the Treasury Department. Those who didn’t have insurance last year must claim an exemption or pay a penalty. Those who received subsidies, which come as tax credits that reduce monthly premiums, need to show they received the right amount each month.

The Supreme Court is weighing a legal challenge that could strike down the subsidies in Illinois and about three dozen other states, with a decision expected in June. For now, the subsidies — and their tax requirements — remain in place.

How many people know any of that remains a question.

“I think there’s quite a bit lacking in people’s awareness of the law, the implications of the law and the opportunities of the law,” said Mark Steber, chief tax officer at Jackson Hewitt, a company that processes about 2 million tax returns each year.

Yet as of Feb. 21, just 40 percent of taxpayers who called the IRS reached a representative, and those who got through waited an average 26 minutes on hold — the worst level of service since the agency adopted its current performance measures in 2001, National Taxpayer Advocate Nina Olson said in written testimony to a Senate subcommittee. 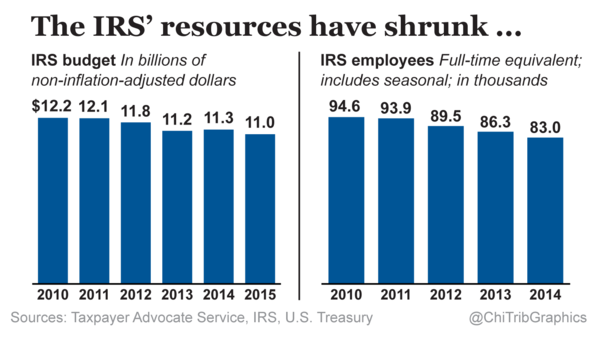 The wait time should be less than five minutes, IRS Commissioner John Koskinen testified to the subcommittee. Koskinen said the health law and other new requirements have added significant new work for the agency. 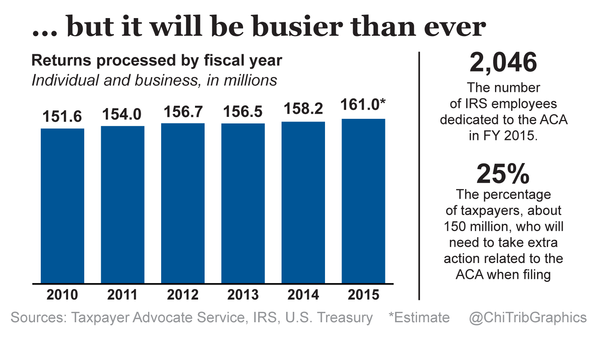 “I remain deeply concerned that the significant reductions in the IRS budget will degrade the agency’s ability to continue to deliver on its mission during filing season and beyond,” Koskinen said in written Senate testimony.

The IRS, which declined to answer questions for this story, had about 1,200 employees dedicated to the health law at the start of the tax season, said James McTigue Jr., the Government Accountability Office’s director of tax issues. The agency had stated it would need 2,046 workers dedicated to the law for the 2015 fiscal year, but Congress didn’t allot money for the hires.

Some members of Congress have said the IRS should spend its money more efficiently. Rep. Ander Crenshaw, a Florida Republican who heads an appropriations subcommittee, told Koskinen in a Wednesday hearing that the agency had overspent on executive travel, conferences and employee bonuses as well as mismanaging funds in other ways.

“We deliberately lowered the IRS funding to a level that will make the IRS think twice about what you are doing and why you are doing it,” Crenshaw said.

Congress has reduced the agency’s budget by 10 percent since 2010 and the agency has reduced its staff from about 95,000 people to about 83,000, according to the Taxpayer Advocate Service.

In addition to staffing concerns, some experts worry that technical systems being used for the first time this year carry the potential for delays and mistakes administering the health law’s subsidies and penalties.

Three to 5 percent of the nation’s taxpayers received the tax credits for insurance last year, according to the Treasury Department. The credits were based on income estimates for the year, and people who earned more or less than expected now either owe the government money or are supposed to get money back.

Insurance marketplaces send planholders 1095-A forms that they use to report any tax credits. The IRS verifies the reported information against Department of Health and Human Services data using an automated system.

The system is similar to others the IRS uses to match tax returns with external records, such as W-2s, but the IRS doesn’t normally start matching those records until July, after tax season is over, McTigue said. The agency is checking returns against marketplace data during the filing season, increasing the potential of delayed refunds, he said.

“There’s a potential of a lot of errors with that,” she said, noting that discrepancies often result in automatic violation notices to which taxpayers must respond or face penalties.

The IRS is also administering the penalties for people who didn’t have insurance last year, as well as processing forms for those who were exempt from the coverage requirement because of low income or other conditions.

This tax season, the penalty is $95 per adult and $47.50 per child or 1 percent of household income, whichever is greater, according to the IRS.

The agency has the authority to withhold refunds to pay the penalties but cannot issue tax liens or garnish wages as in other cases where taxpayers owe money, according to Lindsey Buchholz, principal tax research analyst at The Tax Institute at H&R Block.

Some tax experts wonder whether the health law’s requirements could have been simpler.

Michael Singer, a Northbrook certified public accountant, said some clients pay little attention to health-related forms that arrive in the mail. Many are unaware of the law’s specifics, which include an exemption from the penalty for people who went without insurance for three months or less, he said.

“Unfortunately a lot of people just don’t understand some of this stuff and they don’t realize how important it is to pay attention to some of it,” he said.

The law requires that health insurance plans meet a “minimum essential coverage” requirement, but determining which private plans meet the requirement is difficult, Singer and other CPAs said, especially since neither employers nor insurers are required to prove this year that their plans met the requirement.

Complicating matters for people with marketplace plans is that tax preparers often cannot tell whether a particular 1095-A form is one of the 820,000 containing a mistake.

The penalty for not having insurance will increase for 2015 to $325 or 2 percent of household income. Open enrollment for 2015 plans ended in February, but the federal government added a special enrollment period for people who didn’t learn about the penalty until filing taxes this year. Those people still need to pay the penalty for 2014 but can sign up for insurance through April 30 on healthcare.gov.

Singer said he monitors a stream of emails from the IRS for guidance on specifics. Having been through rollouts of new taxes before in his 44 years as a CPA, Singer said he expects the IRS to relax requirements if it makes mistakes that burden taxpayers.
“While we don’t know what they’re going to do, because it’s too new, I suspect that if they start seeing a problem, where something’s causing a problem for the taxpaying public, the chances are … they won’t penalize them,” he said.

The new requirements are even more complicated for small business owners and those who are self-employed, said Geoff Harlow, a tax partner at Deerfield-based accounting firm Kessler Orlean Silver.

“I’m not sure that I could come up with a better way to do it, but it’s difficult to understand, there’s no question about it,” Harlow said.

It’s Obamacare’s First Tax Season. Can The IRS Handle It?