Jonathan Bush wants to know why entrepreneurs can come up with an entire Starbucks-style language and culture for coffee but have little traction in health care. 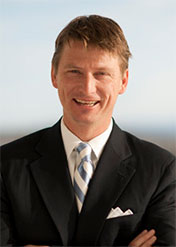 “Don’t jam the entrepreneurs,” said Bush, during a high energy, ebullient talk that had the TEDMED audience on its feet by the end. A scion of the Bush political family (George W. Bush is his cousin; George H.W. Bush is his uncle), Bush leads athenahealth, a health care technology and practice management company that is working on care coordination, too.

Bush was one of several speakers who focused on the high costs of health care and reform of the delivery system on the second day of TEDMED’s innovation summit at Washington’s John F. Kennedy Center for Performing Arts.

Bush said the health care system’s biggest problem was that the “profit motive is trapped in a weak marketplace” where there is precious little transparency or competition. He paused to tell the audience that everybody had a profit motive, and joked that it was OK.

Bush promoted the idea of limited government intervention and more competitors in a marketplace that he said was currently producing mediocre hospitals and costly care. The field needs to be more open to other caregivers beyond doctors who can do the job for a lower cost, he said.

“As caregivers, [doctors] want to feel needed,” he said. “But there need to be other players in the field.”

Bush got one of several enthusiastic responses on Wednesday in a line-up that included tap dancing twin brothers, the mayor of Oklahoma City, a Human Genome Project researcher, physicians treating chronic illness, and the quirky, inimitable fitness icon Richard Simmons.

“It’s about knitting a tapestry,” said Jay Walker, chairman of TEDMED, in the pressroom. He said this multidisciplinary approach was the only way to change what he calls the “sick care system.”

Attendee and volunteer Jessica Jarvis, a health communications professional, said a talk by Dr. Zubin Damania, who left a secure job at Stanford University to commit himself to community health, particularly inspired her – especially when he spoke of asking himself if he was connected to his purpose in life.

“I think we are all doing the same thing here at TEDMED, checking in with ourselves, then bringing back this open-minded and inquisitive spirit to our everyday lives,” she said.