Eight states  including Florida, Colorado and Georgia  would lose more than 40 percent of their federal funding for Medicaid over the next decade under the House Republicans’ plan to repeal the 2010 federal health law and convert Medicaid into a block grant program, according to an analysis of the plan’s effects on states released today.

The study found that under the plan authored by House Budget Chairman Paul Ryan, R-Wis., states would lose an average of 34 percent of their federal funding for Medicaid. The drop in funding would range from 26 percent in Washington, Vermont and Minnesota to 44 percent in Florida and Wyoming.

The study was released by the Kaiser Family Foundation’s Commission on Medicaid and the Uninsured and conducted by researchers at the Urban Institute. (KHN is an editorially independent program of the foundation.)

The GOP’s 2012 budget, which passed the House last month in a vote along partisan lines, would save the federal government $1.4 trillion in Medicaid spending over 10 years, including $610 billion from the repeal of the health law and $750 billion from the move to make Medicaid a block grant program. That would be a 34 percent reduction over planned Medicaid spending under current law  including the health overhaul  and 22 percent less than under the existing program, according to the Kaiser study. 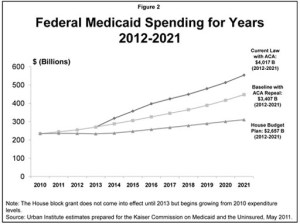 States that currently have the tightest Medicaid income eligibility rules and the highest proportion of poor people would gain the most under the Medicaid expansion in the federal health overhaul, and they would be the biggest losers under the Ryan plan, the report said. Under the health law, 16 million additional Americans would be expected to join Medicaid starting in 2014. Medicaid today covers about 50 million low-income Americans, mostly children and pregnant women. It also covers millions of poor people in nursing homes.

As a result of the cuts in funding in the Ryan plan, the Kaiser analysis estimates that between 31 million and 44 million fewer people would be enrolled in Medicaid in the next decade. Most would be left without insurance coverage.

“Under the House Budget plan, the Medicaid block grant would reduce and cap federal Medicaid spending, substantially reducing states’ ability to provide coverage to low-income Americans,” Diane Rowland, executive vice president of the foundation and executive director of the Kaiser Commission on Medicaid and the Uninsured, said in a statement. “The repeal of the ACA combined with the adoption of the Medicaid block grant would add millions more to the number of uninsured Americans and compromise Medicaid’s role as the health safety net in the next recession.”

Republican governors, asking for greater flexibility to design Medicaid programs as their states face massive budget gaps, have supported the Ryan plan for Medicaid block grants. In a letter to Ryan last month, they said, “We appreciate the many innovative reforms this budget will demand; the current path forward is unsustainable. Chairman Ryan, your Medicaid proposals are far superior to those envisioned in the PPACA.” The governors, upset with the new healthcare reform law’s requirement for states to maintain Medicaid eligibility standards until 2014, said block grants would provide states with the flexibility to tinker with the safety net for the poor in a responsible way.

Democrats who control the Senate and President Barack Obama oppose the Ryan plan.

Hospitals would also be losers in the Ryan strategy. The report found hospitals could expect their Medicaid payments to drop by as much as 38 percent by 2021.

Under the House plan, states would get increases in federal funding based on general inflation – which tends to rise more slowly than health inflation – and for changes in population size. Currently, the federal match has no such limits.

The other states that would see a more than 40 percent reduction in federal Medicaid payments are Wyoming, Alaska, Oregon, Nevada and Delaware, the study said.

According to the Congressional Budget Office, the Ryan plan would lead to big reductions in most states’ Medicaid allotments: Within a decade, states would get about a third less money than they would otherwise receive by 2022 and by nearly half in 2030.

To make up for huge reductions in federal funding under the Ryan plan, states have to either have to contribute far more of their own money, or, more likely, use their new flexibility under the block grant to cap enrollment, substantially scale back eligibility, and curtail benefits for seniors, people with disabilities, children, and other low-income Americans who rely on Medicaid for their health care coverage.

The Kaiser findings closely mirrored a recent report by the left-leaning Center on Budget and Policy Priorities, which found the House plan would have cut federal Medicaid funds to most states by more than 25 percent by 2009 and to several of them by more than 40 percent if it had been in effect starting in 2000.  The center found Arizona would have been hit the hardest, receiving 52 percent less in federal Medicaid funding over the 10-year period. The five states that would have experienced the largest percentage reductions – Arizona, Nevada, New Mexico, Alaska and Florida – would have experienced average cuts of 39 percent over 10 years and average cuts of 47 percent in 2009.

The five states with the smallest reductions would have been cut an average of 9 percent over the 10-year period and 17 percent in 2009, according to the center’s study. These states are Connecticut, the District of Columbia, Nebraska, New Hampshire and North Dakota.