This story is part of a reporting partnership that includes Kansas Public Radio, Kaiser Health News and

Kansas insurance officials – trying to develop a recommendation for “essential health benefits” that individual and small group health insurance policies will be required to offer under the 2010 federal health law – are running into a problem: the calendar. 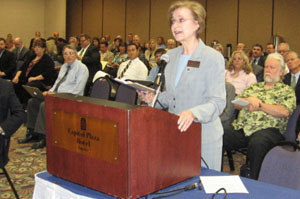 The state must settle on its plans for those benefits by Sept. 30, says Insurance Commissioner Sandy Praeger, or the federal government will dictate the coverage requirements. But Republican Gov. Sam Brownback, an ardent opponent of the health law, wants to wait until after the presidential election in November.

“We want the governor’s office to understand that if we don’t make that election by the end of September, then we will have lost the opportunity to determine what that essential health benefit package will look like,” said Praeger, also a Republican.

Brownback’s spokeswoman Sherriene Jones-Sontag says the administration will not make any decisions regarding the health law’s implementation until the presidential election is settled. Republican candidate Mitt Romney has vowed to overturn the law, which was passed by a Democratic Congress and signed by President Barack Obama.

But state insurance officials note that if the federal government sets the health benefits for Kansas, the state could end up with a richer—and more expensive—benefits package than the governor might prefer.

The health law defines 10 broad categories of coverage for these insurance plans that will be sold on the state exchanges, or marketplaces, starting in 2014, but the federal government has allowed each state to determine much of the specific coverage that will be mandated in each state. Among the items and services that are included in the federal requirements are such things as maternity and newborn coverage, behavioral health care and prescription drugs.

Congress specified the children’s coverage because it is cost effective, said Suzanne Wikle, of the advocacy group Kansas Action for Children, who testified last week at a public hearing on the benefits. It “shows the law’s intent—that children should receive benefits beyond those that are laid out in the other nine categories,” she said. “Rather than being limited to oral and vision care, pediatric services should include all of the medically-necessary care that is not covered by any of the other nine categories.”

Some would like to see pediatric services extended even further.  Pam Shaw, a pediatrician and professor at the University of Kansas Medical Center and the mother of  a child with autism, told the insurance officials at the meeting, “And I can tell you that having autism coverage as part of the state employee health plan is essential now. As we see the rates of autism, one in 88 children having it, being able to provide services for these children is extremely important at this time.”

Others worry about the effect a more expansive set of essential health benefits might have on the cost of health insurance.  “Any increase in mandates or coverage will increase the cost of providing health care, and we’re already at the tipping point of businesses being able to afford to provide coverage,” said Eric Stafford of the Kansas Chamber of Commerce.

Beverly Gossage, who heads the Greater Kansas City Association of Health Underwriters, shares that concern. She predicted that the 10 to 15 percent of state residents who have individual policies will have to pay more.  Gossage says that’s because the so-called essential benefits include coverage that these beneficiaries are not paying for now and may not use.

“Those with individual policies certainly are not looking at those richer benefits,” she said. “They don’t choose those benefits. And one that really stands out, of course, are those who choose not to have normal maternity in their plans, and this is a requirement in the essential health benefits.”

But cost shouldn’t be the only concern, according to Sheldon Weisgrau.  He heads a nonprofit organization that seeks to help Kansans understand the health overhaul.  Weisgrau says it’s important to remember why Congress included essential health benefits in the law.  “Health care and health insurance are expensive and complex. There’s seldom a balance of information between the provider, or seller, and the consumer.  It is reasonable, therefore, for consumers to be protected from products that offer extremely limited coverage and value.”

This story is part of a reporting partnership that includes Kansas Public Radio, Kaiser Health News and  NPR.