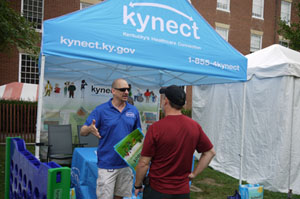 A Kynect booth at the Kentucky Bourbon Festival in Bardestown, Ky. (Photo by Phil Galewitz/KHN)

But potential buyers are wary.  On a late September night – just days before the Oct. 1launch of the state’s online health insurance marketplace called Kynect — most passersby are unaware of their new health insurance options under the law, confused by the political sniping and doubtful the law will help them.

“I thought this was defunded,” said Carolyn Richards, 53, of Mount Sherman, who has been uninsured for a decade. She had heard the Republican–controlled House of Representatives had voted to cut off the law’s funding last week, but was unaware that the White House and Senate Democrats were refusing to go along.

Politically divided,  Kentucky is the only southern state running its own Obamacare marketplace and one of just two committed to expanding Medicaid, making it a unique bellwether of public receptivity to the law.  While Gov. Steve Beshear is a Democrat, its two senators, Senate Minority Leader Mitch McConnell and Rand Paul, are Republicans and ardent foes of Obamacare.

“If the law can go in Kentucky, it can go anywhere,” said Mark A. Rothstein, professor of law and medicine at University of Louisville School of Medicine and Brandeis School of Law.

The fierce and often nasty debate has certainly made it a tougher sell, acknowledged Barbara Gordon of Kentuckiana Regional Planning & Development Agency, one of two nonprofits designated to help consumers enroll. “People are confused by all the mixed messages,” she said.

But in Bardstown, which proclaims itself the world’s bourbon capital, there are signs the law’s advocates are making headway. Most of those interviewed at the festival expressed interest in Kynect, saying they’ll check it out after it goes live Tuesday to see if they qualify for Medicaid or for federally subsidized private insurance.

Sharon Omstead, 46, who works at a nearby factory putting labels on bourbon bottles and who calls Obama “the devil” for his economic policies, was surprised to learn that she’ll qualify for Medicaid and have to pay little or nothing for health coverage under the law.

“I’d heard a lot of bad things about the law and how it will make prices for health insurance go up, and how everyone will have to buy insurance even if they can’t afford it.”

Pam Lux, 59, of Edgewood, complained about how insurers have turned her away due to her diabetes and assumed that would happen again until a Kynect worker informed her that such exclusions are prohibited under the law starting next year. “I’m glad to hear that,” she said.

About 17 percent of the state’s population, 650,000 people, lack insurance, a percentage that is a little higher than the national average, and many of them are poor. That’s the target population for Kynect. Its customer service center has received more than 4,000 calls since it opened Aug 15. More than 5,000 people have registered for online training, including 3,500 insurance agents.

To get around the political stigma burdening the law, Gordon tells so-called navigators assisting consumers that the Obamacare label is poisonous and to avoid it.

“For a lot of people in Kentucky…Obamacare has a negative connotation and if you say Obamacare, people pretty much shut down and won’t list to anything beyond that,” she said.

On the other hand, Gordon said, Affordable Care Act “makes people’s eyes glaze over.” She coaches navigators to ask, “Do you need to connect to health care? Do you have health insurance? If not, let us help you.”

Kelli Cauley, 42, has an additional selling pitch as a navigator — she has hormonal problems that kept her from getting affordable coverage for 18 months. “I was looking forward to the changes under the law and am looking forward to providing unbiased information because there are so many misconceptions going on,” she said.

But in the rush to educate consumer guides, some of those misconceptions were being passed along. At the Lake Barkley Harvest & BBQ Festival in western Kentucky, for instance, one Kynect worker did not know that people on Medicare are generally not eligible for the exchange. 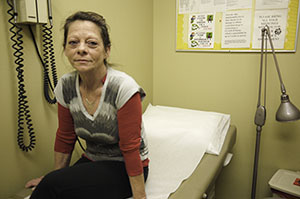 Kathryn Hicks, 58, is uninsured and unsure if she can afford the exchange (Photo by Phil Galewitz/KHN).

Gov. Beshear acknowledged in an interview that the public debate is confusing “and obviously that’s the intent.”

“But I think opponents of the law are scared to death of being in position a year from now, where people look at them and wonder what all the noise was about as they sit here with an insurance policy that they can afford,” he said.

Not all consumers may feel that way, though.

Kathryn Hicks, 58, has thyroid and lung problems and is uninsured. Her $310 a week cashier job at Ace Hardware in Louisville means she likely will make too much to qualify for Medicaid, though she will qualify for subsidized private coverage.

But she said she could not afford to pay even $100 a month for coverage. “I have to decide between paying the power company or whether to eat,” she said.

In Kentucky, Confusion And Misinformation Abound On Eve Of Obamacare Rollout