“The federal exchange is a perfectly viable alternative,” said Jon Kingsdale, a Boston health care consultant who formerly led the state agency that started Massachusetts’ exchange in 2006, the model for the federal health law. Consumers on the federal exchange would still be able to shop and enroll in private plans and apply for federal subsidies to lower their costs.

State-run exchanges have some advantages, Kingsdale said. For instance, enrolling in Medicaid is easier because they connect consumers directly to the state-federal health insurance program for the poor. State exchanges also generally have lower premium taxes than the federal exchange, fees that insurers pass on to consumers.

Bevin’s plan to end Kynect has brought a strong rebuke from Obamacare advocates and outgoing Kentucky Gov. Steve Beshear, but it’s also revived questions about whether the states or the federal government are best positioned to run the marketplaces. Bevin is a Republican and Beshear is a Democrat.

The exchanges are a linchpin in the federal law that has brought health coverage to 16 million people since 2010. The law’s drafters initially thought all but the smallest states would run their own exchanges, but most Republican governors blocked them in their states, citing opposition to the Affordable Care Act. 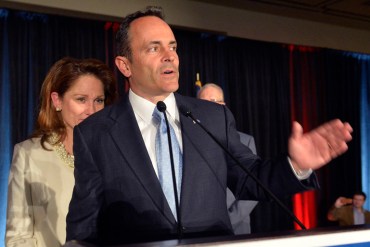 Nevada, Oregon and Hawaii ran into technological problems with their enrollment systems and have shifted in the past year to using the federal healthcare.gov site, but they still do other marketplace functions, including marketing and offering consumer assistance. Nevada and Oregon both posted solid enrollment gains in the second annual enrollment period that ended in March 2015 after switching to healthcare.gov.

Kentucky’s exchange is considered one of the best-run state exchanges because of its innovative, extensive marketing to uninsured consumers and its ease of use. About 500,000 Kentucky consumers have enrolled on Kynect since 2013, most of them for Medicaid. The state’s uninsured rate has dropped from 20 percent to 9 percent the past two years, according to the latest Gallup poll.

Bevin’s concern is whether the state could end up being on the hook financially if its revenues from premium taxes don’t keep up with the expenses associated with operating Kynect. That wasn’t a problem in the exchange’s startup years when the federal government paid all the costs for state exchanges. But the federal money has run out, and Kynect, like other state exchanges, must rely mainly on premium taxes to fund operations.

Several states including Vermont and Minnesota are struggling to raise enough revenue through premium taxes. With less money, some state exchanges including Rhode Island have greatly curtailed marketing to attract more enrollees. With the dramatic drop in uninsured Americans nationally and the exchanges now more well known, it’s unclear whether either will matter. More than 97 percent of people have coverage in Rhode Island, according to Gallup.

Dan Schuyler, at health care consulting firm Leavitt Partners, said states that run their own exchanges retain more control over their individual insurance markets and how consumers experience the sign-up process. California’s exchange, for instance, limits which insurers can participate to help it negotiate better rates. Connecticut’s exchange requires all insurers to offer standardized plans so it’s easier to compare rates and benefits.

“If you take consumers out of Kynect and put them into the federal marketplace, from a product perspective, nothing changes as consumers have access to same plans,” said Schuyler, Leavitt’s senior director of exchange technology.

But executing such a move would cost Kentucky control over which nonprofit groups provide consumer assistance and the state’s call center would likely move out. Joel Ario, a partner with Manatt Health Solutions who oversaw the exchanges’ launch while at the federal Department of Health and Human Services, said switching to the federal marketplace is the lowest-risk move for a state and “…in theory the end user should not notice a difference….in functionality.”

The question of whether states should continue running their own marketplaces should come down to whether states have the right technology and the funding to keep them sustainable. But Ario said politics is too often at play.

State exchanges could lower their costs by using healthcare.gov for enrollment while retaining other functions such as consumer assistance and marketing. Starting next year, the federal government will charge state exchanges to use its enrollment system.

Kynect has an annual budget of about $28 million, all funded by its 1 percent assessment on health premiums. That charge would increase to 3.5 percent in a federal exchange, and dismantling Kynect would cost the state an estimated $23 million in one-time expenses, said Audrey Tayse Haynes, head of Kentucky’s Cabinet for Health and Family Services.

Bevin takes office Dec. 8. The earliest that he could shut Kynect would be in 2017 because the health law requires a 12-month notice to the federal government.

The technology work for decommissioning would take about nine months, state officials said.