Kentucky has run one of the most successful Obamacare individual health insurance exchanges, attracting enough people into private health plans and Medicaid to cut the state’s uninsured rate by half in two years.

But Kentucky’s online health insurance marketplace for small employers also created by the Affordable Care Act has mostly been a dud. Just 92 employers have signed up and a total of 901 people, both workers and their dependents, have received coverage through the specialized exchange. 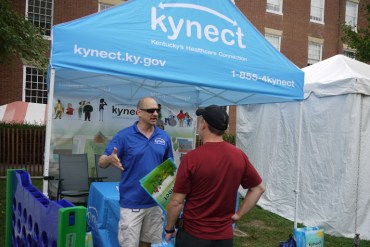 A Kynect booth at a festival in Bardestown, Ky., in 2013. Kynect, Kentucky’s health exchange, has been successful even as enrollment there in the small business exchange lags. (Photo by Phil Galewitz/KHN)

Kentucky isn’t the only state with paltry enrollment in the online marketplaces known as the Small Business Health Options Program, or SHOP, that generally started in 2014.

Sixteen states plus the District of Columbia run their own marketplaces for small business health insurance plans. As of October, several state-run SHOP exchanges in addition to Kentucky had sold coverage to fewer than 200 employers including Idaho, Maryland, Minnesota and Washington.

New York and California have the highest enrollments, and together those two states account for about 6,500 employers and almost 50,000 people.

Sign-ups in the state-run exchanges parallel the low totals achieved by the federally run SHOP exchange that operates in 34 other states. Altogether, about 11,000 employers and 85,000 people signed up for coverage there, according to the latest federal data released in May. That’s less than 1 percent of the U.S. small group insurance market, which in 2013 had about 16.7 million people enrolled in health plans, according to Mark Farrah Associates, a market data firm.

The weak performance stems partly from small businesses still having decent alternatives outside of SHOP — at least until 2017. That’s when employers will have to begin buying plans that fully meet Obamacare’s requirement to provide essential health benefits. The grace period small employers are in now gives them access to less expensive policies that make SHOP plans less appealing.

Other factors also have played a role in SHOP’s low sign-ups, including software problems in some state programs and a yearlong delay that kept the federal SHOP exchange from being fully operational until 2014.

Employers with fewer than 50 full-time workers are eligible to buy coverage on SHOP. The federal government even offers businesses an incentive — a tax credit worth up to half an employer’s share of their workers’ premiums. But there are some conditions. Among them: The firm must employ fewer than 25 workers and their average annual salary can’t exceed $50,000. The credit is hardly used in high-cost areas of the country where pay is higher.

The longest-running small business exchange in the country is in Utah, which started one in 2010 using state funds. It has attracted 698 employers and a total of 14,332 people.

Other states are moving to change their programs.

Hawaii, citing fewer than 250 employers enrolled and only 1 in 5 insurers selling plans, that state has asked the Obama administration for permission to drop its SHOP exchange for 2017.

Elsewhere, Arkansas this month launched its own SHOP exchange, but with only one insurance carrier — Blue Cross and Blue Shield of Arkansas, which was required to participate. Cheryl Gardner, executive director of the exchange, said she expects few employers to enroll initially and will consider it successful if the technology works.

With the federal government running the state’s SHOP exchange in the first year, less than 200 people enrolled. The Arkansas exchange has spent about $4 million to get up and running.

The Kentucky SHOP exchange, which used millions of dollars in federal grants to get set up, costs about $125,000 to run each year.

“When we first launched it was very onerous and burdensome and clunky to enroll and employer groups and agents took the position, ‘We are not going to use SHOP,'” she said. The exchange has worked to fix technological challenges, but Banahan said the biggest obstacle now is that employers still can save money by staying with their existing policies sold outside the exchange. Those plans don’t have to meet all the new Obamacare rules so they tend to have lower premiums, but they will have to comply starting in 2017.

“We will increase enrollment this year, but we won’t see big change until 2017,” Banahan said.