Americans are pessimistic that the new health care law will improve the quality of medicine, do a better job protecting consumers or lower costs, a new poll shows.

Only 20 percent of people believe consumer protections will get better under the law, while most others think protections will stay the same or get worse, according to the poll from the Kaiser Family Foundation. (KHN is a program of the foundation.)

The findings clash with the views of some advocates of the law, who have long believed the consumer protections were among some of the most popular provisions. Those protections include a ban on insurers denying coverage to people because of pre-existing conditions and elimination of lifetime caps on the amounts insurers will pay for care for policyholders.

A previous KFF poll had found several of the consumer protections were popular when explained in detail. But in the new poll, which inquired broadly about consumer protections, even Democrats were skeptical about the law’s potential for improvement for consumers.

Forty-one percent said quality would decline under the law. Americans are also gloomy about the rising cost of care, with 49 percent saying that problem will get worse. Many say they are feeling the impact: six of 10 people with private insurance are seeing higher premiums; half cite increases in their co-pays and deductibles. 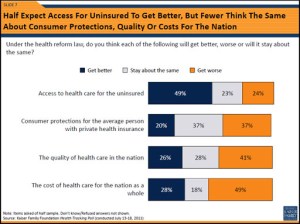 Interestingly, when pollsters asked about what’s driving up the cost of medical care, people’s responses didn’t reflect the cost-control priorities of the law. Seventy-one percent blamed waste, fraud and abuse, and the same number said drug companies make too much money. More than half blamed malpractice lawsuits. Most health care economists would not list those three items as the top drivers of health care inflation.

Framers of the law want to target overuse of health care, but fewer than half of respondents said doctors were paid too much or people were getting more services and tests than they really need.

One conclusion where the public view converged with those of advocates of the health care law: both concluded insurers make too much money.

The poll was conducted from July 13 through July 18 among 1,201 adults. The margin of error was +/- 3 percentage points.

Poll Finds Americans Gloomy On Some Promises In Health Law