The Supreme Court’s ruling upholding the Affordable Care Act did not change the partisan public divide on the law, according to a new poll gauging initial reaction. People’s views on Thursday’s ruling were evenly split and generally reflected what they thought of the law in the first place.

Overall, public opinion was divided, with 47 percent approving of the court’s decision and 43 percent opposing it, a statistical tie. Those views are in line with the public’s view of the law itself: The poll found that 41 percent of people oppose it and the same proportion supports it.

“As has been true since the law’s infancy, Americans’ views towards all things [related to the Affordable Care Act] are heavily influenced by party identification, and the court’s ruling is no exception,” the pollsters wrote.

Independent voters without any partisan tilt, about 20 percent of all poll respondents, were evenly split on the ruling. But like an overwhelming majority of Democrats and independents who lean toward that party, these swing voters say it is time for the country to focus on other issues.

Overall, 56 percent of the public said opponents of the law should stop trying to block it and move on to other national problems. Among independents who don’t favor either party, 51 percent said it was time to move on, while 35 percent said efforts to halt the law should continue.

The poll found that the ruling boosted Democratic enthusiasm about the law, which hasn’t been nearly as intense as Republican opposition to it. The proportion of Democrats who say they have a “very favorable” view of the law increased from 31 percent in May to 47 percent after the ruling. Republicans still remain more passionate in opposition, with 64 percent holding a “very unfavorable” view.

Political analysts and campaigns have been watching the intensity of these views to determine what role the law may play in getting voters to the polls in November for the presidential and congressional elections. While most voters said the ruling wouldn’t play a role in their decision to vote, Republicans were much more likely than Democrats to say the ruling would be a motivator.

The court’s 5-4 ruling—with conservative Chief Justice John Roberts and the four liberal justices voting to uphold the law — did sharply diminish Republican faith in the impartiality of the court. The share of Republicans viewing legal reasoning as the most important factor in the court’s decision dropped by half, from 39 percent to 19 percent, after the ruling, while the proportion of Republicans crediting “national politics” for the ruling increased by 14 percentage points.

The decision softened Democrats’ cynicism, with only 8 percent saying that a justice’s vote was based on which party’s president appointed the person, down from 22 percent. (In fact, of the nine justices, only one, Roberts, broke from the party of the president who appointed them.)

In line with previous Kaiser polls, this one – conducted Thursday, the day the decision was announced, through Saturday – found a less-than-thoroughly engaged citizenry.  Only 59 percent of those surveyed were aware that the Supreme Court had issued a ruling upholding the law. Eighteen percent were confident the court hadn’t acted, while 17 percent just didn’t know.

Still, the public’s engagement on the ruling was greater than it has been on the law itself. In March, on the second anniversary of the law’s passage, four out of 10 people thought the law had been overturned, according to a previous Kaiser poll. Other polls have found the public to be wrong about many details of what the law does.

Given that history, the pollsters gave a positive spin to public knowledge about the court, writing, “It can take a lot to get the public’s attention in the heat of summer, but it turns out a Supreme Court ruling on a major domestic issue in the midst of a presidential campaign can do the trick.” 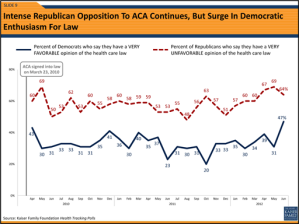