The Los Angeles County Department of Public Health supervisor in charge of nursing home inspections has been moved to another job days after the release of a highly critical audit of his division.

Ernest Poolean, who has been a county employee since 1968 and became the head of the Health Facilities Inspection Division in 2011, has been reassigned to the Baldwin Park headquarters, according to a memo sent to the staff Thursday. 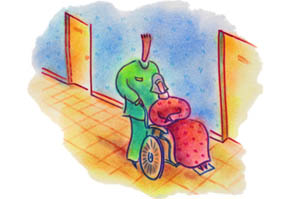 Terri Williams, the assistant deputy director of environmental health division of the department, has taken over Poolean’s responsibilities.

“As I become familiar with the program, I have full confidence that solutions can be identified during this difficult media time to make Health Facilities shine,” Williams wrote in the staff memo.

Poolean will be working on a “special assignment” under Williams’ direction, the memo said.

Poolean’s reassignment comes after the Los Angeles County Auditor-Controller found that there were more than 3,000 open investigations into nursing homes, including 945 that have been open for more than two years. The audit, released last Friday, also determined that there is no central management of the investigations and that the inspectors do not have set deadlines for completing cases.

“Without time frames/benchmarks to complete investigations, HFID is not conveying expectations to their staff and cannot hold them accountable for their performance,” the audit stated.

The L.A. County Board of Supervisors ordered the audit following a report about the backlog by Kaiser Health News, published by the Los Angeles Newspaper Group. The report found that supervisors had instructed staff members to close cases without a complete investigation in an attempt to whittle down the backlog — a finding disputed by the department.

Dr. Jonathan Fielding, who heads the public health department, said Thursday he couldn’t comment on personnel matters. But he said  the department was working diligently to close the open cases.

“We’re committed to maximizing the efficiency of this important division and to eliminating the backlog, but we need additional resources from the state to accomplish the latter,” Fielding said.

The county audit found the department was not using all the funds at its disposal, leaving $2 million in each of the last two fiscal years unused.

The California Department of Public Health, which contracts with the county to oversee nursing home safety, is also conducting an inquiry into the county’s Health Facilities Inspection Division.

The division is responsible for overseeing 385 nursing homes in the county, with about 56 staff members assigned to conduct investigations and routine surveys, according to the audit.