Abuse in nursing homes and suspicious deaths among seniors often go undetected because postmortem examinations are becoming few and far between. 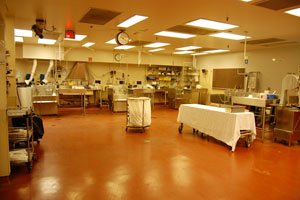 Earlier this year, an NPR News investigation found that many jurisdictions stopped doing autopsies on people who died over the age of 60, unless it was obvious that a violent death occurred. A lack of resources, both financial and staffing, was often to blame.

Since then, NPR’s reporting partners ProPublica and PBS Frontline have continued the investigation and uncovered more than three dozen cases in which alleged abuse, neglect and murder of seniors eluded authorities. It was only after a whistle-blower or relative pushed medical and law enforcement officials for answers that the cases were reopened.

Take the case of a 76-year-old man described in the latest report. His death was tied to a combination of ailments related to poor care, and he also received an “inappropriate administration of powerful antipsychotic drugs, which have potentially lethal side effects for seniors.” His original death certificate said “heart failure brought on by clogged arteries.” The real reasons for his death only came to light after a nursing-home staffer spoke up.

The story published also on PBS Frontline’s website, continues the Post Mortem series about deep flaws in the U.S. death investigation system. The reporting reveals that the number of U.S. autopsies performed on seniors dropped from 37 to 17 percent between 1972 and 2007. It also found other “systemic flaws” in the many overlooked cases:

“When treating physicians report that a death is natural, coroners and medical examiners almost never investigate. But doctors often get it wrong. In one 2008 study, nearly half the doctors surveyed failed to identify the correct cause of death for an elderly patient with a brain injury caused by a fall.

In most states, doctors can fill out a death certificate without ever seeing the body. That explains how a Pennsylvania physician said her 83-year-old patient had died of natural causes when, in fact, he’d been beaten to death by an aide. The doctor never saw the 16-inch bruise that covered the man’s left side.”

Continue reading the full report on why suspicious elder deaths are rarely investigated.

In Shots last week, we also reported on the continuation of the Post Mortem series, which focused on the lack of autopsies taking place in hospitals.