This story was written by advanced reporting students at the Philip Merrill College of Journalism at the University of Maryland, in conjunction with KHN.

NPR correspondent Nina Totenberg threw herself into the center of a word usage debate in February when she asked the lawyer for a man who had lied about receiving a Congressional Medal of Honor, “So, is your client a nut case?”

A paraphrase of the question about Xavier Alvarez also appeared in a text write-up of the story Feb. 22 on NPR’s website.

In online comments about that story, listeners criticized Totenberg for insensitivity. “I almost dropped my teeth” at the question, wrote commenter Amy Gasper on the day the story was published. “Was she asking if Alvarez had a history of mental illness? Was she asking his attorney to diagnose a mental illness?

‘Nutcase’ is a pejorative term that I would expect to hear in the rhetoric exchanged by the anchors on Fox, not by a respected journalist.”

In a follow-up blog post by NPR ombudsman Edward Schumacher-Matos, Totenberg was quoted as saying it was not her intent to offend those with mental illness when she asked that question of public defender Jonathan Libby.

And in an email forwarded by her intern, Totenberg later explained: “I used nutcase not in text and not to refer to an insane person. In a question to Mr. Alvarez’[s] lawyer, I used the term to indicate a total flake,” who does not have a “close relationship with truth telling.”

So why was there such a strong reaction to the national radio reporter’s word choice? And should the media in general be more careful about the language used to describe mental illness and disability?

“There’s a distancing for people with mental illness, usually with the perception of, ‘Oh, if they have a mental illness, they must be violent.’ And that’s such a low percentage that we would be talking about,” Carolla said. 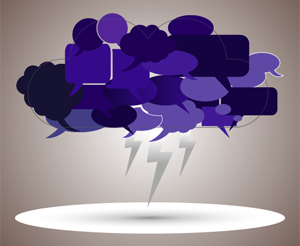 Words like “psycho,” “wacko” and “crazy” can contribute to the stigmatization of people with mental illness, he said.

Ron Honberg, national director for policy and legal affairs at NAMI, agrees. He said stereotypes are barriers that can prevent people with mental illness from getting treatment and can create problems for them in all aspects of their lives.

“It impacts negatively on people’s ability to get jobs, to find housing, to have social relationships,” he said. “It’s as big a barrier to recovery probably as the symptoms themselves.”

Words with negative connotations can also greatly affect how people with disabilities of all kinds are treated and can influence public policy, said Tim Shriver Jr., co-founder of Spread the Word to End the Word. His group has been working since 2008 to end use of the word “retard.” Shriver is the grandson of Special Olympics founder Eunice Kennedy Shriver, whose sister Rosemary was mentally disabled.

Putting the spotlight on the word “retard,” Shriver said, underscores the harm it can do, “and it calls for people to change it.”

Many Americans suffer from mental illness. The federal Substance Abuse and Mental Health Services Administration reported earlier this year that 45.9 million adults – 20 percent of those 18 or older – experienced mental illness in the past year.

The language used to describe mental illness and disability has improved over the years, advocates say. In classifying a person’s IQ in the early 20th century, the original Stanford-Binet test score categories for mental deficiency were moron, imbecile and idiot. These terms were considered neutral identifiers of a low score; however, with time they began to take on negative connotations and became insults.

Today, mental deficiency is measured in terms of mild, moderate, severe and profound.

The Associated Press Stylebook, a guide to word usage for journalists, is updated frequently with new preferred terms and phrases. The word “handicapped” did not enter the AP Stylebook until 1987, becoming the first official guidepost for how journalists should refer to people with intellectual or developmental disabilities.

Since then, the guidelines have changed several times to reflect the wishes of advocates and people with disabilities.

According to David Minthorn, deputy standards editor of the Associated Press and one of three AP Stylebook editors, the stylebook through the 2000s listed “mentally retarded” as the preferred term for “people with significantly sub-average intellectual functioning.” It had a disclaimer to not use retard as a noun.

In 2008, editors made “mentally disabled” the preferred term, following conversations with medical professionals, he said.

The current AP Stylebook recommends that journalists “do not describe an individual as disabled or handicapped unless it is clearly pertinent to a story” and to avoid terms that imply pity for the subject.

An analysis of U.S. newspapers’ and wires’ use of terms associated with people with intellectual and developmental disabilities revealed published use of the word “retarded” significantly decreased between 2006 to 2010. Additionally, the more accepted terms of “mentally disabled” and “developmentally disabled” increased in use steadily over the past several decades. The analysis looked at the terms from 1980 to 2010, at two-year intervals during the week of July 10-16.

Despite the language improvements in the media, Carolla said poor word choices still occasionally pop up, especially in headlines — where political correctness may be sacrificed in favor of cleverness.

Carolla cited an example from July 2002 when a Trenton, N.J., newspaper, The Trentonian, published a headline reading “Roasted Nuts” about a psychiatric hospital that caught fire. Although no one was hurt in the fire, Carolla said there was a national uproar over the paper’s editorial choice.

More recently, a JetBlue pilot made headlines when he disrupted a flight by leaving the cockpit and screaming about religion and terrorism. The New York Daily News published a headline on April 18, 2012: “JetBlue ‘wing nut’ to plead insanity.”

But, Carolla said, it’s not just politically incorrect words that are the problem. It’s the stories the media choose to cover.

“If someone with a mental illness gets into trouble or does something, that’s what people will read about,” he said. “It’s much rarer to find the recovery stories.”

Words Can Wound: How The Media Describe The Mentally Ill And Disabled