This story also ran on The Dallas Morning News. This story can be republished for free (details).

ARLINGTON, Texas — Bích-Thu “Lisa” Pham has become a familiar face at this Vietnamese community center, setting out her Affordable Care Act insurance materials in a small office several afternoons each week. She also holds enrollment sessions at local Vietnamese shopping centers and near Vietnamese-owned nail salons, and every Sunday morning she assists members of her own Vietnamese congregation in Fort Worth who want to sign up for coverage. 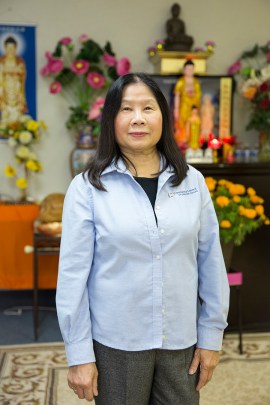 Lisa Pham, a Vietnamese-speaking health insurance marketplace navigator, helps fellow Vietnamese-Americans sort through not only their ACA options, but also whether they qualify for other public health programs, such as Medicaid. (Laura Buckman for KHN)

She’s a “rock star” in her ability to get Vietnamese residents in the greater Fort Worth area insured, said Daniel Bouton, who directs health services at Community Council of Greater Dallas, the nonprofit organization that receives federal funding to assist northeast-central Texas consumers sign up for ACA coverage.

It’s an important mission in Texas, where the Vietnamese uninsured rate runs nearly twice the national rate. Dallas-Fort Worth is home to the fourth-largest Vietnamese population in the U.S., with nearly 72,000 residents, and the Houston area ranks third, with nearly 104,000 residents, according to a Census Bureau analysis of 2010 data.

Nationally, 7.7 percent of Vietnamese residents were uninsured as of 2016 versus nearly 20 percent in 2010 prior to the ACA, according to an analysis of Census Bureau data by the Asian & Pacific Islander American Health Forum, a nonprofit advocacy organization. (Among all Americans, the uninsured rate last year was 8.8 percent.)

But the rate among Vietnamese Texans is 14.2 percent, although that is a steep drop from 27.4 percent in 2010.

In California, which has the nation’s two largest metropolitan Vietnamese communities, the rate was 16.6 percent in 2010 and 4.2 percent last year.

Along with sometimes limited English-speaking proficiency, signing up Vietnamese-Americans can involve other challenges, including in some cases a lack of credit history, said Cathy Phan, who has worked on ACA enrollment in the Houston area for the Asian American Health Coalition-Hope Clinic. Part of the ACA’s verification process includes running a check with a credit reporting agency, she said.

“We see that a lot — especially with newly immigrated Vietnamese community members,” Phan said. “Over in Vietnam, everybody still uses cash. I think the general cultural mentality is you don’t really want to go into debt — you want to avoid it as much as possible.”

Throughout the year, Pham makes the Vietnamese community center east of Fort Worth one of her regular stops. The center, which offers meals, a game room and prayer rooms, serves as a hub for resources about local services. People have learned to seek her out there, said Pham, an ACA navigator since 2013.

The 67-year-old Pham, who moved to the United States in 1975, jokes that her husband is lobbying her to follow in his footsteps and retire. She’s held various jobs through the years, including as a software engineer and a translator at a local hospital, along with raising three children. To work as a federal navigator, a paid full-time position, she completes certification training annually.

In that role, she signs up uninsured residents across Fort Worth and Arlington. She particularly enjoys using her bilingual skills to help fellow Vietnamese-Americans sort through not only their ACA options, but also whether they qualify for other public health programs, such as Medicaid.

“I see a lot of people, they don’t speak English and they don’t know what’s going on,” Pham said. “I feel like it’s my duty to share [information] with them.”

On a recent November afternoon before her appointments began, Pham gave a short spiel to potential clients about the federal health law, including this year’s condensed sign-up period.

One of her appointments was with Mua Thi Nguyen, a 61-year-old thyroid cancer survivor. Nguyen had been reluctant to switch from her individual private insurance policy, worried that she wouldn’t have sufficient access to cancer specialists if the malignancy returned. But her income dropped and her premium reached slightly more than $1,000 each month, Nguyen explained, speaking some English and some Vietnamese.

After running the numbers, Pham showed Nguyen that she qualified for significant federal subsidies that would bring her monthly premiums to $422 for a “gold”-tier plan and $73 a month for a “silver” plan that included no deductible. Nguyen, uncertain about which policy to select, opted to go home and mull over her options. 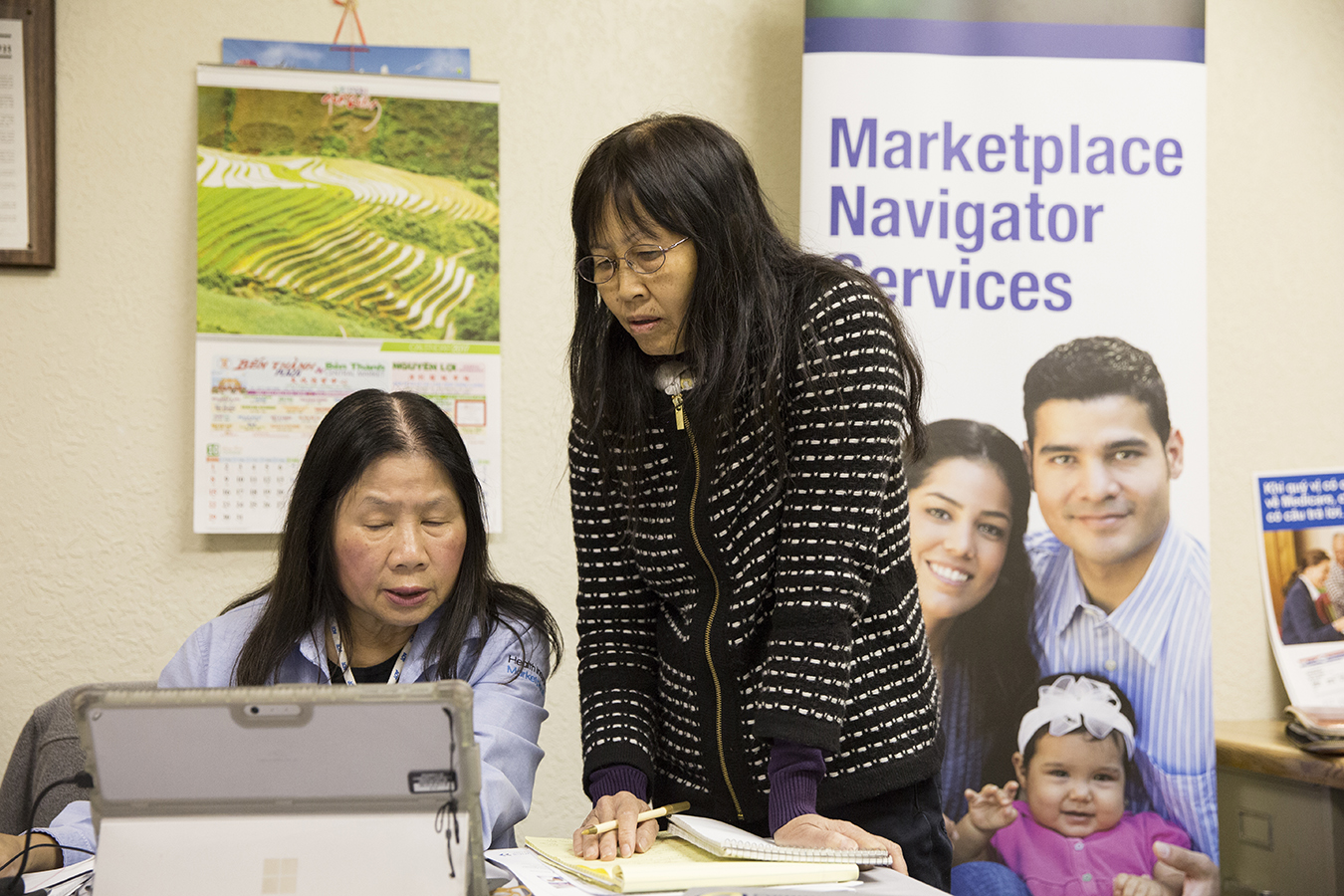 The Trump administration severely reduced federal funding for outreach and navigator services this year. Bouton’s group took an 18 percent cut, receiving $1.8 million compared with $2.2 million last year to serve the 56-county region, which stretches east to the Louisiana border and north to Oklahoma.

The choice was made to retain as many navigators as possible, and slash the marketing budget, Bouton said. So, this year, the operation has 35 navigators, including two new Vietnamese speakers, compared with a total of 40 previously. There’s no radio advertising for the 2018 enrollment season, and no ads in local movie theaters, he said. Thus, Vietnamese-targeted marketing has been eliminated as well, including advertising in a local newspaper and printing new promotional placards in Vietnamese.

Another funding casualty has been the Fort Worth ACA enrollment office, which closed this fall. That worries Pham. Some of her Vietnamese clients had become accustomed to going there and might not have transportation options to reach other sites such as the community center, she said.

Pham and other Texas navigators have only six weeks, through Dec. 15, to sign up people through the federal ACA exchange.

Their counterparts serving the more sizable Vietnamese communities in California aren’t facing similar constraints. California operates its own state exchange and enrollment there stretches through Jan. 31, which was the deadline for the federal exchange last year.

Leaders at two California-based groups providing health services to Asian communities said they were concerned that recent reports in San Francisco and other areas about detention and deportations by U.S. immigration officials of Vietnamese and Cambodian immigrants might have a chilling effect.

“We’re still at the very beginning of this sign-up, so we’ll see how it plays out,” said Thu Quach, director of community health and research at Asian Health Services in Oakland, Calif. “But we know from the past, that anytime there’s concern that there are policies that target immigrants, it’s caused a lot of impact in the community around signing up for anything.”

They don’t speak English and they don’t know what’s going on. I feel like it’s my duty to share [information] with them.

Bilingual navigators, such as Pham, can bridge a critical communication divide. Nationally, 46 percent of Vietnamese have limited English proficiency, meaning they speak the language less than “very well,” according to Census data analyzed by the Asian & Pacific Islander American Health Forum.

An individual’s comfort level with English also can influence which ACA plan he or she selects. In the Houston area, Vietnamese residents sometimes are willing to pay higher premiums for access to more Vietnamese-speaking physicians, said Phan, with the Hope Clinic.

At the Vietnamese community center here earlier this month, a 61-year-old woman walked in asking about ACA coverage. Hong Vu, who spoke very little English, told Pham that she’d been insured until a few months before, when her husband had suffered a stroke and she quit her job to care for him.

Vu passed her Social Security card and other paperwork across the desk. But since Vu didn’t have a credit history, Pham couldn’t immediately establish an account. Instead, she took photos of Vu’s documents to forward to federal officials.

Several days later, after Vu’s identity had been verified, she returned to the community center to discuss insurance plans, Pham said.

Vu qualified for “bronze” plan coverage for herself, which after subsidies would cost $115 a month. Unsure whether she could afford the premium, Vu decided to talk it over with her husband.

Vu did end up getting the coverage, meeting Pham at another enrollment session at a Vietnamese shopping plaza. “She worried about if she gets sick in the future,” Pham said, “so that’s why she said she wanted to have the peace of mind.”