The Puerto Rican truck driver, then 50, had attributed his growing leg pain to spending so many hours on the road. The real culprit was a malignant tumor in his left kidney that was pressing on nerves from his lower spine.

His initial treatment involved removing the organ, a complex surgery that, by itself, proved insufficient, as the cancerous cells had already spread to his lungs. Therefore, his primary care physician in Puerto Rico contacted doctors at the National Institutes of Health (NIH), in Bethesda, Md., and managed to enroll Cabrera in a medical study to test an innovative therapy: transplanting blood stem cells to destroy the cancer cells.

Today, at 70, Cabrera, a father of five and grandparent who moved to West Virginia with his wife to be closer to NIH, feels strong and healthy. “I come to do tests every six months — I’m like a patient at large,” he said.

However, Cabrera is one of a relatively small number of Hispanics who participate in clinical trials. “Only less than 8 percent of enrollees are Hispanic, even though Hispanics comprise 17 percent of the population,” said Dr. Eliseo Pérez-Stable, director of NIH’s National Institute on Minority Health and Health Disparities.

That means not only do Hispanics have less access to experimental cutting-edge treatments but researchers have less data on how a drug works in that population. Studies have shown that different ethnic groups might respond differently to treatments. The lack of patients from minority groups is an endemic problem in clinical trials; minorities typically are represented at a very low rate.

“Studies should represent the demographics of the country,” said Dr. Jonca Bull, an assistant commissioner on minority health at the Food and Drug Administration. “We need to close that gap so we can better understand how a particular drug or therapy works in different communities.”

There are many reasons why Latinos do not enroll in these studies, Perez-Stable said: lack of information, disparities in access to health care and not being fluent in English are among main factors. Dr. Otis Brawley, chief medical officer with the American Cancer Society (ACS), said Latino families are open to participating in clinical trials, especially to help treat a sick son or daughter, but they need advice from a doctor to navigate the process.

Federal officials aim to augment these numbers. In March, the FDA launched a campaign to educate Hispanics about medical studies. “Primary care physicians have to be the champions. … In addition, the community health centers can help, because they are places of care that people trust,” said Bull.

As of July 5, there were 94,545 ongoing clinical trials in the United States, according to the NIH’s official website, clinicaltrials.gov. As in Cabrera’s case, the primary physician usually helps a patient find a medical study, although the advent of the internet in recent decades has meant a growing number of patients discover trials themselves online. To participate, the person must meet the researchers’ criteria for eligibility: age, gender or condition. Often, the center conducting the study covers related costs of drugs, treatments and tests.

For Brenda Aldana, receiving care at Holy Cross Hospital in Silver Spring, Md., made all the difference. 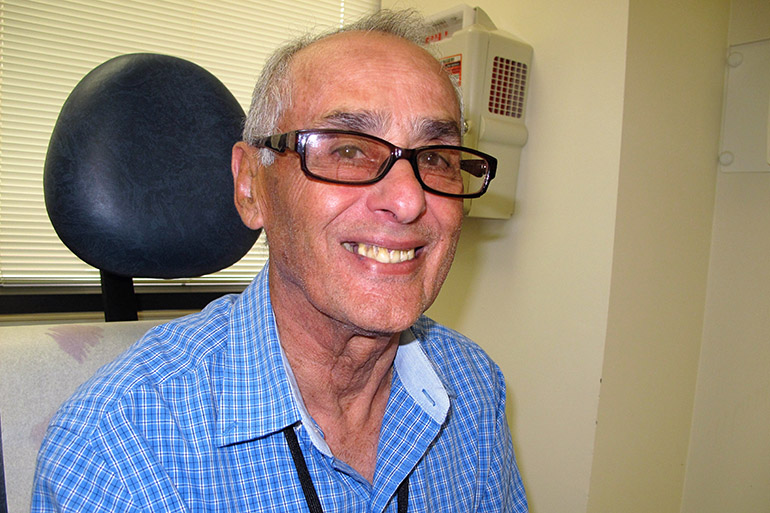 Luis Antonio Cabrera, 70, during his appointment at the NIH Clinical Center in Bethesda, Md., in June.
Two decades ago, he was told he likely had only three months to live, due to a kidney cancer. He
was enrolled in a clinical trial that saved his life. (Paula Andalo/KHN)

Aldana, 34, arrived in the United States from Zacatecoluca, El Salvador, nine years ago. During her first year in the U.S., she began to feel tired and her hair began to fall out. She initially thought those were symptoms of the stress of starting a new life in a new country, but while visiting her sister in Frederick, Md., Aldana fainted. It turned out she was suffering more than nerves: She had a pulmonary embolism. Within two weeks of tests, she was diagnosed with lupus, a debilitating chronic condition with a high incidence among Latinas.

“At Holy Cross, the doctors told me that they were going to help me get into a medical program for a medication to treat arthritis [caused by her lupus],” said Aldana, who has three children, ages 17, 6 and 5.

Aldana travels from Olney, Md., to the NIH Clinical Center once a month to receive intravenous medication.

These days, “Hispanics receive less quality medical care, so it’s important for them to be more involved in clinical trials,” said Brawley, noting that enrolling in a clinical trial gives patients access to a high-quality physician they might not otherwise see.

“In a medical study, instead of having the opinion of a single doctor, you’ll get the opinion of a group of highly qualified doctors who can say, ‘This is good for people like you,'” Brawley said. The American Cancer Society has an information service to help patients find clinical trials that match their medical condition. This service is also available in Spanish.

John Vasquez, 21, of San Antonio, Texas, needed only internet access and a cellphone to find the medical study that could change his life. In September 2015, while on his way to his brother’s football game, he lost feeling in his leg, arm and right part of his face. “I thought I was having a stroke,” he said.

He had aplastic anemia, a potentially deadly rare blood disorder that was destroying his red and white cells, and platelets, which aid the body’s clotting mechanism.

In a Facebook group for people with severe blood conditions, he was advised to contact the NIH, which sent him a kit for blood tests. After analyzing his clinical history, they told him he was eligible to participate in a medical study, which opened the gates to an innovative transplant that could change the course of his disease. Temporarily living with a sister in Maryland, he is scheduled for a bone marrow transplant on Aug. 1. His donor: his 14-year-old brother.

Latinos Left Out Of Clinical Trials … And Possible Cures