Just a few days after he was tapped to be a part of presidential-hopeful Mitt Romney’s transition team, Michael Leavitt Tuesday took on a very different mission: obesity. 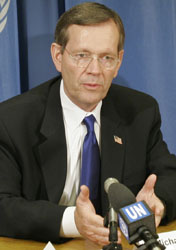 Leavitt was one of four former cabinet officials presenting a report on the economic impact of the obesity epidemic at the Bipartisan Policy Center in Washington.

The former Utah governor and HHS secretary under the George W. Bush administration raised a few eyebrows on his collaboration with Romney, since he has spoken highly of the Affordable Care Act–a piece of legislation Romney says he would repeal of his first day in the White House. Leavitt, who is the founder and chairman of the consulting business Leavitt Partners, has been advising states and providers on health exchanges and accountable care organizations, two key components of the health law.

Officials at the bipartisan think tank said Leavitt was not permitted to answer questions regarding his new role in the Romney campaign.

Instead, Leavitt spoke about the importance of good nutrition and physical activity to combat the country’s obesity epidemic. Leavitt co-chaired the project that led to the report with former HHS Secretary Donna Shalala and former Agriculture secretaries, Dan Glickman and Ann M. Veneman. Leavitt and Shalala both pointed out that over-regulation is not the answer to get Americans healthy.

Shalala said the notion of “Twinkies taxes”–or taxing unhealthy foods–was a controversial part of the public health debate. The recent proposal to ban the sale of large sodas by New York Mayor Michael Bloomberg brings awareness to the idea of reducing soda consumption and portion size, according to the panel, but treads on personal priorities.

“We have to be very careful not to think that we can do this by over-regulating the system,” Shalala said. “At the end of the day, we’ve got to change people’s behavior, their heads, their sense of responsibility for themselves and their family.”

“We feel strongly that all of those who pay for health care–whether it’s public or private–should begin to structure incentive systems that reward effective prevention-oriented services and that have demonstrated a capacity to reduce cost over a significant time,” said Leavitt.

He cited the partnership between United Healthcare and the YMCA to reduce obesity in various communities as a good example, but said that more research needs to be done on how best to measure prevention incentives.

Leavitt Talks Prevention, But Not Politics On Bipartisan Panel