The Supreme Court famously upheld most of the Affordable Care Act in June. But in a year or two we may see another riveting Supreme Court drama growing out of the health law, this one driven by the passionate objections of many religious employers to the so-called contraceptive mandate.

An Obama Administration regulation requiring that many employers — including religious employers — provide insurance without copays or deductibles that covers a wide range of contraceptives, including sterilization, as part of women’s preventive health care. 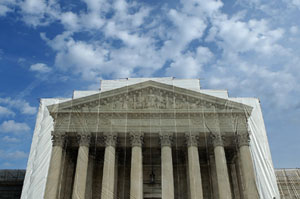 Religious groups decry it as an extreme attack on their freedom. Already, more than 40 lawsuits have been filed by Catholic and evangelical plaintiffs including hospitals, universities and private businesses. The Catholic plaintiffs object to all contraceptives, the evangelicals to methods that induce what they call abortion.

While the legal challenges pose no threat to the law as a whole, they have all the ingredients of a legal donnybrook that might well end up before the high court.

Among the thousands of employers with religious objections are many Catholic hospitals, universities, charities, other religious institutions, and private companies owned by devout Catholics and evangelicals. Collectively, they have millions of employees.

Although the regulation allows for a narrow category of religious employers — mostly churches and other houses of worship — to be exempt from the requirement, the administration has so far refused to grant exemptions to institutions such as Catholic hospitals, because they employ and serve mainly members of the general public and their mission is not primarily religious.

The Legal Issues In Play

The plaintiffs’ claims rest mainly on the Religious Freedom Restoration Act. Congress passed this measure in 1993 to provide broader legal protections than the First Amendment guarantee of “free exercise of religion,” which the Supreme Court had interpreted narrowly in a 1990 decision. It prohibits the federal government from imposing a “substantial burden” on a person’s “exercise of religion” unless it can prove that doing so is “the least restrictive means of furthering [a] compelling governmental interest.”

The administration and its allies argue that the mandate imposes a slight, indirect burden on religious employers, who would be required only to facilitate contraception decisions made independently by their employees, and furthers a compelling need to avert unwanted pregnancies, improve maternal and child health, reduce health care costs and reduce poverty.

They also stress that 20 states have laws similar to the contraceptive mandate; that many Catholic hospitals and universities already provide birth control coverage for their employees; and that polls show the vast majority of Catholic women use birth control methods banned by the church.

In February, in what the administration called a compromise, it said that the cost of the coverage would be borne not by employers with religious objections but by their insurance companies, which in turn would likely save more than the cost of the contraceptives by averting unwanted pregnancies. The compromise, though, would not apply to companies that self-insure.

The plaintiffs claim the mandate forces many religious employers to violate their religion or be subjected to crippling fines of $100 per employee per day, according to press reports and court documents. They add that government’s “compelling interest” argument rings hollow because the health law exempts many non-religious employers, with more than 190 million employees, from its coverage requirements, such as businesses with fewer than 50 workers and those with established health plans that were given “grandfathered” status.

The plaintiffs also stress that free or inexpensive contraceptives are available at community health centers and other public clinics.

Action In The Courts

So far the scorecard on this issue in the federal district courts is three preliminary injunctions against the contraceptive mandate and two decisions upholding it, one of which was later stayed without comment on appeal, at least for now.

O’Brien and his company claim that they cannot comply with the contraception mandate without violating his Catholic beliefs and that noncompliance would subject the company to “ruinous fines” that would drive it out of business.

But Jackson said the mandate imposed only a “slight,” indirect burden because the decision to use contraceptives was ultimately in the hands of third parties — individual employees — and O’Brien’s company would pay only indirectly, through its insurance company.

O’Brien won the stay from an appeals court on November 28. By then, Judge Reggie Walton, of Washington, D.C., had rejected Jackson’s reasoning in a Nov. 16 decision related to a separate case, holding that “it is the coverage, not just the use, of the contraceptives at issue to which the plaintiffs object,” so “it is irrelevant that the use of the contraceptives depends on the independent decisions of third parties.”

Walton granted a preliminary injunction to Tyndale House Publishers, Inc., an Illinois publisher of Christian books. The company and its founder and CEO object to any contraceptive that “can cause the demise of an already conceived/fertilized human embryo.”

Walton ruled that the contraceptive mandate imposed a “substantial burden” because it “places the plaintiffs in the untenable position of choosing either to violate their religious beliefs” or to risk financial penalties. He added that the government had not shown a compelling need for forcing Tyndale to provide coverage for the “very specific subset of contraceptive drugs and devices” to which it objected — especially since “the government itself has voluntarily omitted” millions of people from coverage through the health law’s other exemptions.

Judges in Colorado and Michigan have also issued preliminary injunctions in similar cases.

These early decisions lead some legal experts to suggest that the contraceptive mandate challenges have more chance of ultimate success than other, broader pending lawsuits against health law provisions.

Stuart Taylor Jr. is an author, journalist and nonresident fellow at the Brookings Institution.