Tiny — and very blue — Vermont could be at the leading edge of the health reforms envisioned by the Trump administration and a Republican Congress.

The Green Mountain State, population around 626,000, got a broad waiver last October from the federal government to redesign how its health care is delivered and paid for. The statewide experiment aims to test new payment systems, prevent unnecessary treatments, constrain overall growth in the cost of services and drugs, and address public health problems such as opioid abuse.

The six-year initiative — an outgrowth of a failed attempt by Vermont a few years ago to adopt a single-payer plan for all residents — could eventually encompass almost all of its 16 hospitals, 1,933 doctors and 70 percent of its population, including workers insured through their jobs and people covered under Medicare and Medicaid.

The Obama administration approved the experiment, but it fits the Republican mold for one way the Affordable Care Act could be replaced or significantly modified. The Trump administration and lawmakers in Congress have signaled that they want to allow states more flexibility to test ways to do what Vermont is doing — possibly even in the short-term before Republicans come to an agreement about the future of the ACA.

Two Republican senators, Bill Cassidy of Louisiana and Susan Collins of Maine, introduced legislation in January that would permit individual states to design their own health reforms and keep provisions of the health law intact.

Coincidentally, the ACA contains a provision that allows states to launch such experiments starting this year, as long as they meet the ACA’s overall goals for coverage expansions and consumer protections. One possible scenario, then, is that the Trump administration and Congress would agree to retain a version of that provision — modified to make it easier for states to experiment, experts say.

“It’s a very reasonable approach, especially if it looks as if Congress can’t agree on an immediate replacement plan,” said Stuart Butler, a senior fellow in economics and health policy at the Brookings Institution in Washington, D.C. “States have long been the laboratories for social change and policy reform, and I think many governors, Republican and Democrat, would welcome this opportunity.”

Chris Jennings, a longtime health policy adviser to Bill and Hillary Clinton and Barack Obama, said Democratic states also may be amenable. “There’s a long way to go on this and there are downsides — for example, what would state legislatures actually do — but it looks like it will be a meaningful debate.”

‘We Want To Simplify How Things Work’

Al Gobeille, Vermont’s secretary of Human Services and a Republican serving under newly elected Republican Gov. Phil Scott, said the hope is that the Trump administration will preserve the state’s initiative.

“We are doing what [the Republicans] seem to be talking about,” said Gobeille, who owns a restaurant company in the state. “We want to simplify how things work, with both coverage and access to care. We want to enhance competition and we want to lower cost growth even as we improve quality.”

Scott and Gobeille this month announced the formal launch of the program’s pilot phase. In 2017, 30,000 of the state’s roughly 190,000 Medicaid patients will get care, under a set budget, through an organization called OneCare Vermont. OneCare’s network of hospitals and doctors already provide care to about 100,000 Vermonters.

“This tests the concept of a global budget and streamlined payment which incentivizes better care,” says Todd Moore, OneCare’s CEO. “We may be a small state but we are trying a big thing. If it works, many states are likely to stand up and take notice.”

Moore added that patients will be informed they are part of the program and can seek redress with the state’s Department of Human Services if they feel their care is stinted in any way. 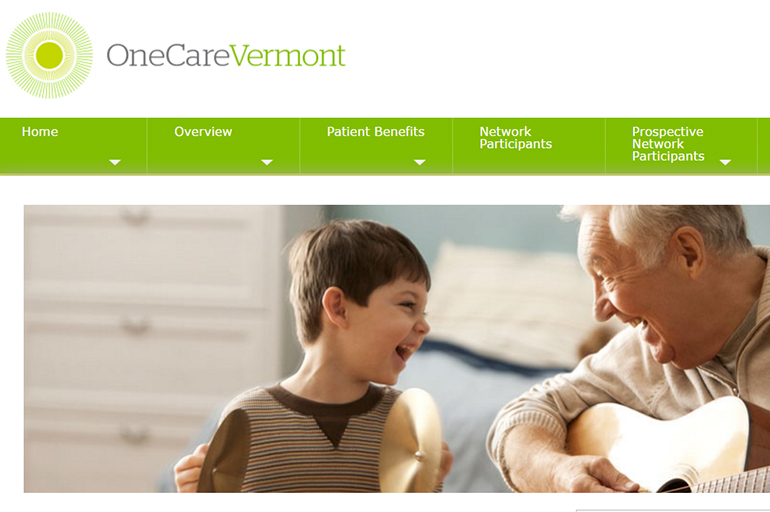 About 30,000 of the state’s roughly 190,000 Medicaid patients will get care through an organization called OneCare Vermont. (Screenshot)

In announcing the pilot program, Scott said that if it’s successful the experiment will be expanded in 2018 and beyond to encompass the rest of the Medicaid population, Medicare beneficiaries and people who have insurance through private employers and on their own, including through Vermont Health Connect, the state’s Obamacare insurance exchange. Additional hospitals, doctors and other providers would become involved, likely under the umbrella of OneCare Vermont.

Medicaid covers almost 30 percent of Vermont residents, Medicare covers 21 percent, and the rest have either private insurance, coverage through the VA or Tricare (military) or are uninsured. About 4 percent of Vermonters were uninsured in 2015, one of the lowest rates in the nation.

Under the terms of Vermont’s contract with the Obama administration, the target for the state’s maximum overall cost increase in health spending would be 3.5 percent per year from 2018 to 2022 — that’s two percentage points lower than the annual 5.6 percent average increase in health care spending nationally the federal government projects between this year and 2025.

Success or failure will also be assessed based on population health and quality of care measures. For example, the plan calls for a reduction of substance abuse deaths by at least 10 percent by 2022. Likewise, the plan sets a target for not more than a 1 percent rise statewide in the number of people with chronic diseases such as diabetes, high blood pressure and COPD (chronic obstructive pulmonary disease). The allowance for the slight increase takes account of the state’s aging population.

The number of people with ready access to a primary care physician will also be evaluated, with a target of 90 percent of residents by 2022.

A Shift From ‘Fee For Service’

To make all this work, almost every doctor and hospital would have to join OneCare Vermont or create their own accountable care organizations, or ACOs. In these organizations, providers agree to work together to improve and coordinate care and reduce spending under a set budget.

ACOs are also set up to allow payers to gradually shift to global per-patient payment, or other simplified forms of payment, and abandon traditional “fee-for-service” payment. Fee-for-service payment in medicine is widely viewed as providing incentives for excessive and wasteful care, as well as fraudulent billing. Both the Affordable Care Act and a 2015 law setting up an incentive-payment system in Medicare for doctors take major steps to test whether ACOs and alternative payment systems improve the efficiency and quality of care.

Vermont’s initiative builds on those efforts.

Some in Vermont are skeptical the experiment will work well, however. Paul Reiss is a family doctor in Williston and chief medical officer for HealthFirst, Vermont’s largest independent practice association. HealthFirst represents (but does not own or operate) 66 doctor groups with 250 doctors, physician assistants and nurses. Reiss said the state’s largest hospital system — the University of Vermont Medical Center — dominates health care in parts of state.

“We are fearful that much of a restricted pot of money will still go mostly to that company, baking in the inefficiencies of a bloated hospital budget, and not be deployed equitably to the front lines of patient care across the state,” Reiss said.

The University of Vermont Medical Center vigorously denied that its budget was bloated. Moore, who is affiliated with the hospital as well as being OneCare Vermont’s CEO, said: “Statewide data do not confirm those assertions. The medical center is, in fact, a strong leader in ushering in a value-based system for Vermont.”

Scott, in announcing the launch of the pilot phase this month, said if it does not work this year, the state would consider terminating the experiment early.