BALTIMORE — At home, parents try to keep their children on a regular sleep schedule, with the evening bedtime transition marked by rituals like reading stories, flipping on night-lights and getting tucked in with favorite stuffed animals.

But that difference between night and day blurs in hospitals — making it more difficult for young patients to rest when they need it the most.

Between the fluorescent lights, the chatter of on-duty doctors and nurses, and being roused for things like baths and vitals checks, getting eight hours of shut-eye is challenging. So now, with research increasingly highlighting the link between sleep and good health, children’s hospitals are rethinking just how they work at night.

“If we’re going to try to heal kids, we need to try to have them do the one thing that’s so important for their brain development. And that’s optimizing their sleep,” said Sapna Kudchadkar, an assistant professor of anesthesiology, critical care and pediatrics at Johns Hopkins Children’s Center in Baltimore. She launched an initiative to improve sleep in the hospital’s pediatric intensive care unit a year ago.

Children’s hospitals are now adopting some of the strategies used to foster better sleep at hospitals serving adults. For example, some are enforcing quiet hours after dark, clustering things like overnight blood draws and medication doses to minimize interruptions, and bringing in tools like white noise machines to promote a soothing environment.

Activities such as bathing children are shifted to daylight hours. Also, playtime is promoted in the afternoon to help maintain a sense of normalcy and contrast nighttime rest. The hope is that children will sleep better and heal faster.

Physicians and hospital administrators are starting to recognize that “we’re doing some stuff in our hospitals that doesn’t really reflect what we’re telling people to do at home,” said Jennifer Jewell, a pediatric hospitalist at the Barbara Bush Children’s Hospital in Portland, Maine, who chairs the American Academy of Pediatrics’ Committee on Hospital Care. 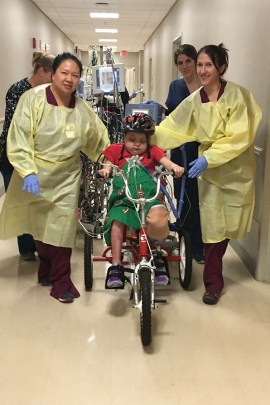 Children’s hospitals aren’t yet held to the same patient satisfaction standards as other facilities. But there is growing interest in better catering to both children and their parents, doctors said. There’s the competitive element, noted Heather Walsh, a registered nurse who coordinates some of the quality improvement trainings undergone by clinical staff at Children’s National Health System in Washington, D.C. If families don’t like the care they get, they can go elsewhere.

And doctors are starting to realize that poor sleep isn’t just inconvenient. It can make children sicker.

In the intensive care unit, for instance, children who aren’t disturbed at night don’t need as much sedation or anesthesia, Kudchadkar said. That matters, she noted, since some of those drugs — benzodiazepines and prescription opioids — can be more dangerous for young patients to take. Kids who rest well at night are also more likely to get up and move around in the daytime.

In addition, because many children’s hospitals encourage parents to spend the night in their child’s room, late-night interruptions — whether a temperature check or the cleaning Zamboni in the hallway — wake them, too. As a result, parents aren’t rested when getting instructions for kids’ follow-up care. It’s easier to mishear or misremember a complicated medication instruction, said Lisa Meltzer, associate professor of pediatrics at National Jewish Health in Denver. Meltzer has also researched sleep quality in children’s hospitals. 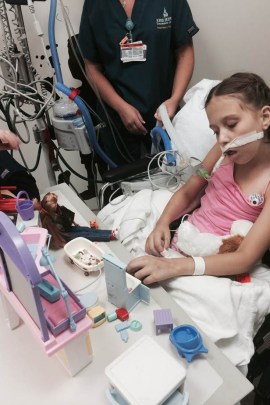 When children can’t get out of bed, nurses in the Johns Hopkins pediatric ICU bring them toys from the unit’s playroom. It’s part of an effort to foster wake-sleep cycles better aligned with how children naturally function. (Courtesy of Sapna Kudchadkar)

The changes can seem small. At Hopkins, blinds are typically lowered between 8 p.m. and 8 a.m., though nurses might adjust that based on a particular family’s needs and habits. Parents are asked their children’s favorite music to sleep to. The ICU’s child life staff will find those songs to play on portable radios. One teenager requested Tupac, while some patients might bring in the soundtracks from their favorite video games. In a number of rooms, many alerts no longer trigger loud beeps blasted from overhead speakers. Instead, they’re sent straight to the relevant nurse’s phone. He or she can see to the child’s need, but the noise doesn’t disturb the whole unit.

Finding a balance, though, is tough. With very sick children, doctors and nurses do need to wake them more often at night. Some tests and medications can’t wait, especially in the ICU, said Patricia Hickey, vice president of cardiovascular and critical care services at Boston Children’s Hospital. Plus it’s hard to accommodate what patients need at different ages. Think of the habits of a 2-year-old versus a teenager. One goes to sleep and wakes early. The other may be unable to sleep before 11 p.m. Hospitals need to accommodate both.

The jury’s still out on how effective these strategies are. It’s difficult to prove reduced chatter leads to shorter hospital stays for kids. But there’s anecdotal support. At Boston Children’s, which launched its sleep-promotion campaign last summer, hallways are markedly quieter, and families have said they appreciate the attention, Hickey said. The hospital’s conducting a survey this fall to better assess that, she added.

But challenges remain. Foremost is teaching doctors and nurses to be quiet and considerate.

“For some people, the night is no different than the day — that’s when they work,” said Myke Federman, a critical care pediatrician who started a sleep initiative at Mattel Children’s Hospital UCLA in Los Angeles.

Many nighttime interruptions — like bathing a child at 3 a.m. — happen because they suit the staff’s schedule, Kudchadkar said. Getting away from that required a major recalibration of the ICU’s workflow and culture. At Hopkins, it took about a year, Kudchadkar added. The ICU used to be as loud as an emergency department. Now, the staff speaks in hushed whispers, even by day.

Meanwhile, for Mattel Children’s Hospital, curbing the nighttime ruckus requires continued attention, Federman said. Mattel, which launched its program in 2015, is trying to bring its noise levels down. So far, they haven’t budged significantly from 50 decibels at night. That’s north of their goal: 30 to 40 decibels, the sound of a quiet library.

Changes have not been easy, Kudchadkar agreed, but they are taking root.

“The bottom line is, ‘How do you create a peaceful, healing environment?’” she said. “We’re getting there.”

Lights Out: Some Children’s Hospitals Take Steps To Ensure A Good Night’s Sleep