Saira Diaz uses her fingers to count the establishments selling fast food and sweets near the South Los Angeles home she shares with her parents and 13-year-old son. “There’s one, two, three, four, five fast-food restaurants,” she says. “And a little mom and pop store that sells snacks and sodas and candy.”

In that low-income, predominantly Latino neighborhood, it’s pretty hard for a kid to avoid sugar. Last year, doctors at St. John’s Well Child and Family Center, a nonprofit community clinic seven blocks away, became alarmed by the rising weight of Diaz’s son, Adrian Mejia. They persuaded him to join an intervention study run by the University of Southern California and Children’s Hospital Los Angeles (CHLA) that weans participants off sugar in an effort to reduce the rate of obesity and diabetes among children.

Linked both to genetics and diets high in sugar and fat, “fatty liver disease is ripping through the Latino community like a silent tsunami and especially affecting children,” said Dr. Rohit Kohli, chief of gastroenterology, hepatology and nutrition at CHLA.

Recent research shows about 1 in 4 people in the U.S. have fatty liver disease. But among Latinos, especially of Mexican and Central American descent, the rate is significantly higher. One large study in Dallas found that 45% of Latinos had fatty livers.

The illness, diagnosed when more than 5% of the liver’s weight is fat, does not cause serious problems in most people. But it can progress to a more severe condition called nonalcoholic steatohepatitis, or NASH, which is linked to cirrhosis, liver cancer and liver failure. This progressive form of fatty liver disease is the fastest-growing cause of liver transplants in young adults.

The USC-CHLA study is led by Michael Goran, director of the Diabetes and Obesity Program at CHLA, who last year made an alarming discovery: Sugar from sweetened beverages can be passed in breast milk from mothers to their babies, potentially predisposing infants to obesity and fatty livers.

Called HEROES, for Healthy Eating Through Reduction of Excess Sugar, his program is designed to help children like Adrian, who used to drink four or more sugary drinks a day, shed unhealthy habits that can lead to fatty liver and other diseases.

Fatty liver disease is gaining more attention in the medical community as lawmakers ratchet up pressure to discourage the consumption of sugar-laden drinks. Legislators in Sacramento are mulling proposals to impose a statewide soda tax, put warning labels on sugary drinks and bar beverage companies from offering discount coupons on sweetened drinks.

“I support sugar taxes and warning labels as a way to discourage consumption, but I don’t think that alone will do the trick,” Goran said. “We also need public health strategies that limit marketing of sugary beverages, snacks and cereals to infants and children.”

William Dermody, a spokesman for the American Beverage Association said: “We understand that we have a role to play in helping Americans manage consumption of added sugars, which is why we are creating more drinks with less or no sugar.” 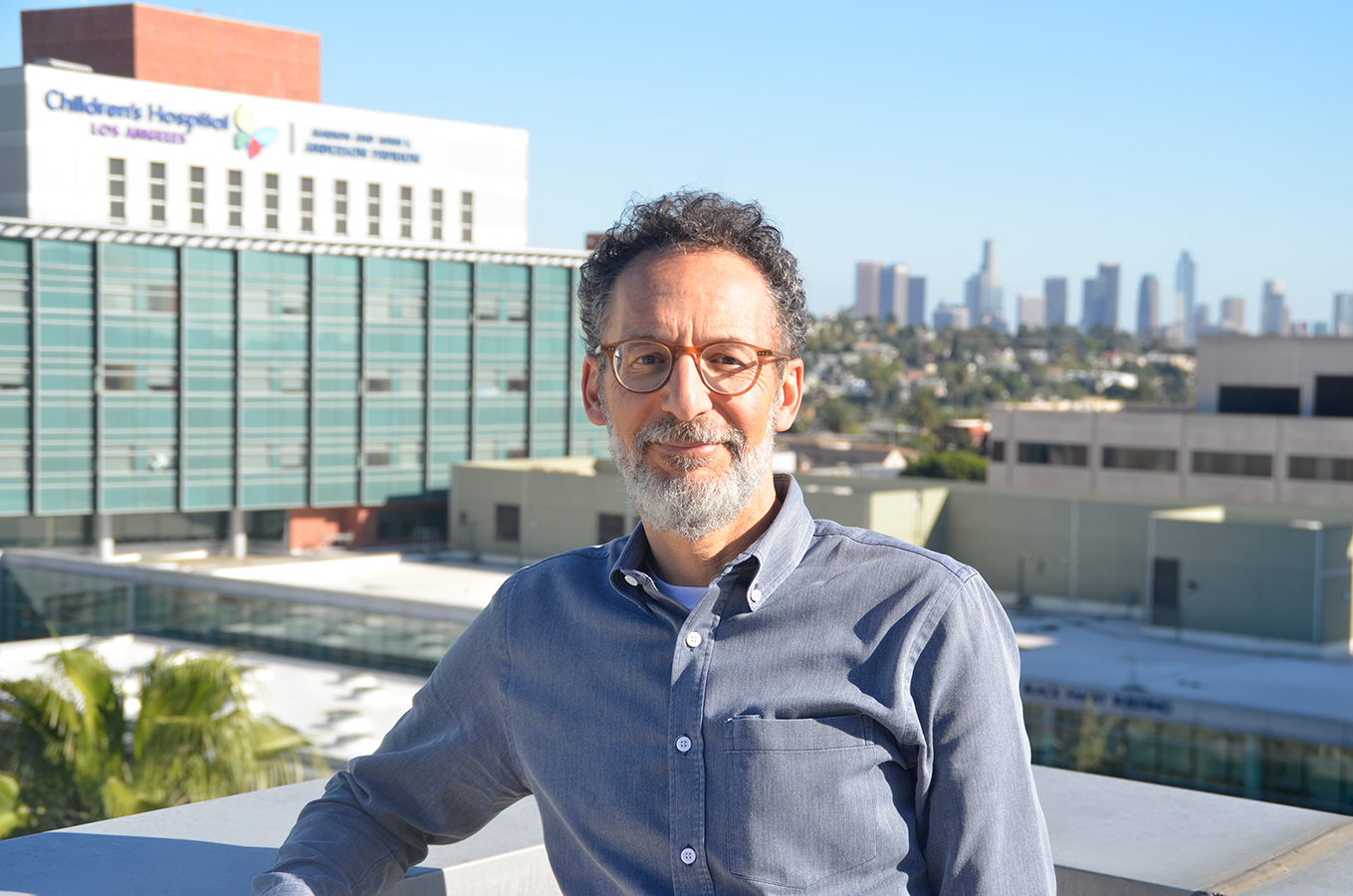 Michael Goran is the director of the Diabetes and Obesity Program at Children’s Hospital Los Angeles and the principal investigator for the HEROES study. “I support sugar taxes and warning labels as a way to discourage consumption,” Goran says, “but I don’t think that alone will do the trick.” (Rob Waters for KHN)

In 2016, 45 deaths in Los Angeles County were attributed to fatty liver disease. But that’s a “gross underestimate,” because by the time people with the illness die, they often have cirrhosis, and that’s what appears on the death certificate, said Dr. Paul Simon, chief science officer at the L.A. County Department of Public Health.

Still, Simon said, it was striking that 53% of the 2016 deaths attributed to fatty liver disease were among Latinos — nearly double their proportion of total deaths in the county.

Medical researchers consider fatty liver disease a manifestation of something called metabolic syndrome — a cluster of conditions that include excess belly fat and elevated blood pressure, blood sugar and cholesterol that can increase the risk of heart disease, stroke and diabetes.

A 2008 study by another group of researchers nudged Goran further. It showed that a variant of a gene called PNPLA3 significantly increased the risk of the disease. About half of Latinos have one copy of that high-risk gene, and a quarter have two copies, according to Goran.

He began a new study, which showed that among children as young as 8, those who had two copies of the risky gene and consumed high amounts of sugar had three times as much fat in their livers as kids with no copy of the gene. Now, in the USC-CHLA study, he is testing whether reduced consumption of sugar decreases the fatty liver risk in children who have the PNPLA3 gene variant.

At the start of the study, he tests kids to see if they have the PNPLA3 gene, uses an MRI to measure their liver fat and catalogs their sugar intake. A dietitian on his team educates the family about the impact of sugar. Then, after four months, they measure liver fat again to assess the impact of the intervention. Goran expects to have results from the study in about a year.

More recently, Goran has been investigating the transmission of sugar from mothers to their babies. He showed last year that in nursing mothers who drank beverages sweetened with high-fructose corn syrup — the primary sweetener in standard formulations of Coca-Cola, Pepsi and other sodas — the fructose level in their breast milk rose and stayed elevated for several hours, ensuring that the baby ingested it.

This early exposure to sugar could be contributing to obesity, diabetes and fatty livers, based on previous research that showed fructose can enhance the fat storage capacity of cells, Goran said. 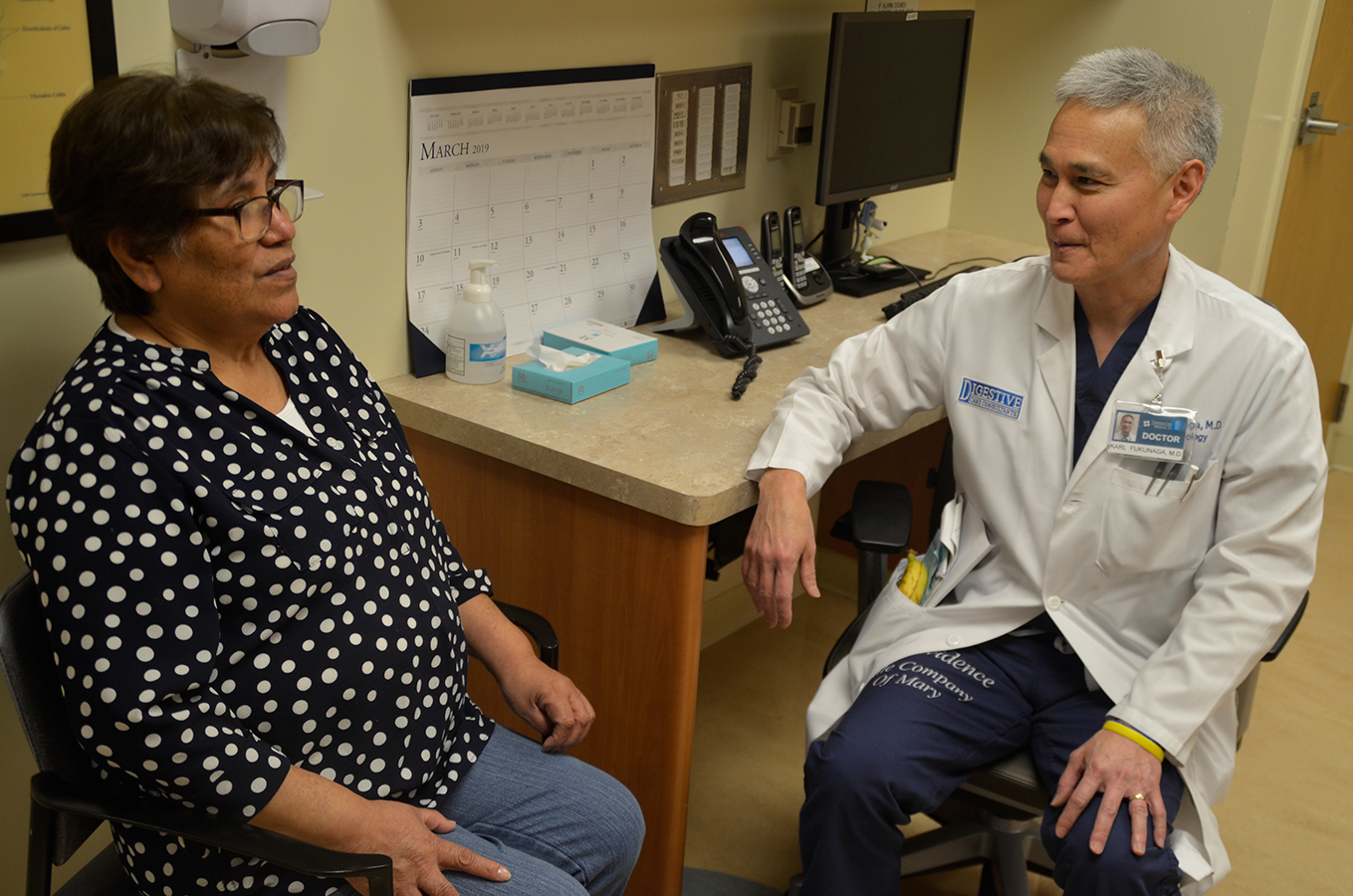 At Torrance Memorial Medical Center, Dr. Karl Fukunaga meets with a patient, Margarita Marrou, a retired medical clerk originally from Peru. She was diagnosed several years ago with a severe form of fatty liver disease and has cut down her sugar consumption and lost weight. (Rob Waters for KHN)

In neighborhoods like South Los Angeles, where Saira Diaz and Adrian Mejia live, a lack of full-service markets and fresh produce makes it harder to eat healthily. “Access to unhealthy food options — which are usually cheaper — is very high in this city,” Derek Steele, director of health equity programs at the Social Justice Learning Institute in Inglewood, Calif., told Kaiser Health News.

The institute has started farmers markets, helped convert two corner stores into markets with healthier food options and created 109 community gardens on public and private lands in South L.A. and neighboring Inglewood, which has 125 liquor and convenience stores and 150 fast-food outlets.

At Torrance Memorial Medical Center, 10 miles down the road, Dr. Karl Fukunaga, a gastroenterologist with Digestive Care Consultants, said he and his colleagues are seeing so many patients with fatty liver disease that they plan to start a clinic to address it. He urges his patients to avoid sugar and cut down on carbohydrates.

Adrian Mejia and his mother received similar advice from a dietitian in the HEROES program. Adrian gave up sugary beverages, and his liver fat dropped 43%. Two months ago, he joined a soccer league.

“Before, I weighed a lot and it was hard to run,” he said. “If I kept going at the pace I was going, probably later in my life I would be like my [diabetic] grandma. I don’t want that to happen.”