Teenage girls who are given access to long-acting contraceptives such as IUDs or hormonal implants at no cost are less likely to become pregnant, according to a study in the New England Journal of Medicine released Wednesday. 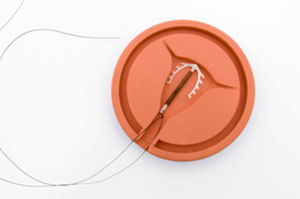 The findings come just two days after the American Academy of Pediatrics recommended that health providers should consider IUDs and implants first when discussing contraception choices with teen girls.

Although there are not as many teenage pregnancies as there once were — rates have been cut by more than half since 1991 — they still pose serious public health issues because of the costs associated with child birth and public assistance for young mothers. These pregnancies can also stunt education and income opportunities for teenage moms.

Each year, 750,000 teenage girls become pregnant, and 80 percent of those pregnancies are unintended. The most common forms of contraception — 52 percent of teenage girls use male condoms and 31 percent use birth control pills — are unfortunately the most susceptible to mistakes. For example, oral contraceptives work best if women remember to take the pills at the same time every day.

An implant is a plastic rod the size of a matchstick inserted into the inside of the upper arm by a health provider, and the IUD is a small, T-shaped plastic device inserted into the uterus. The initial cost for each of these methods is significantly higher than for oral contraceptives, but long-term costs for them even out over time because the devices last from three to 12 years.

“If a woman can only get a pill, and it’s hard for her to remember, there is a higher risk of her having an unintended pregnancy,” said Susan Berke Fogel, director of reproductive health at the National Health Law Program, a group that advocates for health rights for low-income and underserved people.

The Affordable Care Act requires that contraception be provided to women without cost, except for those in plans that existed before the health law was enacted.

There are also some exceptions in Medicaid programs. State Medicaid plans are required by federal law to offer “family planning” and related supplies, but because those benefits are not defined, state officials may decide what contraceptive methods will be covered.  Some states have limited the types of contraceptives available to women enrolled in Medicaid, according to the Kaiser Family Foundation. (Kaiser Health News is an editorially independent program of the Foundation.)

That means that in those states, teenage girls covered by Medicaid may have to get prior authorization before they can receive one of the long-acting contraceptives.  Or they may have to try birth control pills first and show that they are unable to use them successfully before obtaining IUDs and implants.

In Medicaid “there is no cost sharing, but because they can define it however they want, they might not cover the expensive methods,” said Judy Waxman, vice president of health and reproductive rights at the National Women’s Law Center. She added that the federal government could define “family planning” to include what is in the Affordable Care Act — access to all methods approved by the Food and Drug Administration without a copay.

States are starting to address this issue with legislation. South Carolina in 2012 was one of the first states to cover the cost of insertion of an IUD post-delivery, and Illinois in August expanded Medicaid reimbursement of contraception to include IUDs.  California Gov. Jerry Brown signed a bill this week that mandates most insurance plans in the state, including Medicaid managed care plans, cover all FDA-approved contraceptives.