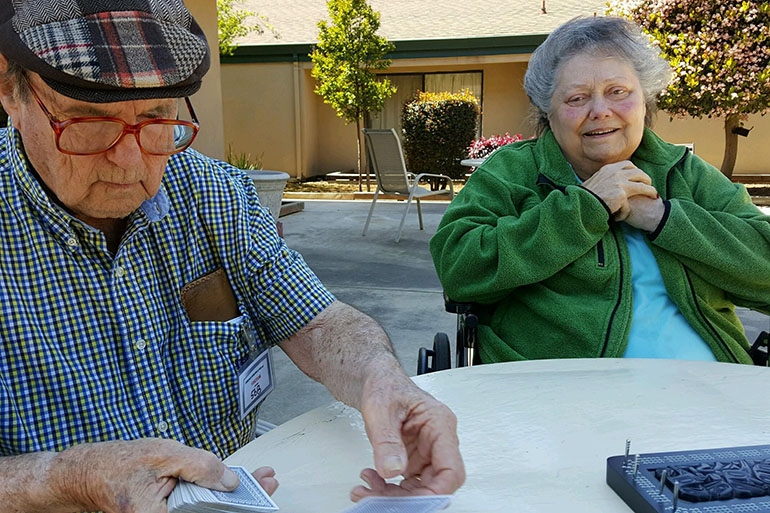 Mel Nickerson visits his wife, Donna, at the Turlock Rehabilitation and Nursing Center in April. Mel Nickerson moved his wife, who has Alzheimer’s disease, to the facility after he realized he could no longer care for her safely at home. (Courtesy of the Nickerson family)

Donna Nickerson spent her last working years as the activity and social services director at a Turlock, Calif., nursing home.

But when she developed Alzheimer’s disease and needed that kind of care herself, she and her husband couldn’t afford it: A bed at a nearby home cost several thousand dollars a month.

“I’m not a wealthy man,” said Nickerson’s husband Mel, a retired California State University-Stanislaus professor. “There’s no way I could pay for that.”

Experts estimate that about half of all people turning 65 today will need daily help as they age, either at home or in nursing homes. Such long-term care will cost an average of about $91,000 for men and double that for women, because they live longer.

In California and across the U.S., many residents can’t afford that, so they turn to Medicaid, the nation’s public health insurance program for low-income people. As a result, Medicaid has become the safety net for millions of people who find themselves unable to pay for nursing home beds or in-home caregivers. This includes middle-class Americans, who often must spend down or transfer their assets to qualify for Medicaid coverage.

Medicaid, known as Medi-Cal in California, was never intended to cover long-term care for everyone. Now it pays for nearly 40 percent of the nation’s long-term care expenses, and the share is growing. As Baby Boomers age, federal Medicaid spending on long-term care is widely expected to rise significantly — by nearly 50 percent by 2026.

The pressure will only intensify as people age, so both state and federal officials are scrambling to control spending.

“Medicaid bears an incredible financial challenge if substantial changes aren’t made,” said Bruce Chernof, president and CEO of the SCAN Foundation. (KHN’s coverage of aging and long-term care issues is supported in part by a grant from The SCAN Foundation.)

State Medicaid directors are closely watching as long-term care spending takes up larger shares of their budgets and squeezes out other programs, said Matt Salo, executive director of the National Association of Medicaid Directors.

“There isn’t a day that goes by they are not thinking about long-term care,” Salo said. “It makes up a huge portion of the entire budget and it’s growing … It is absolutely not sustainable.” 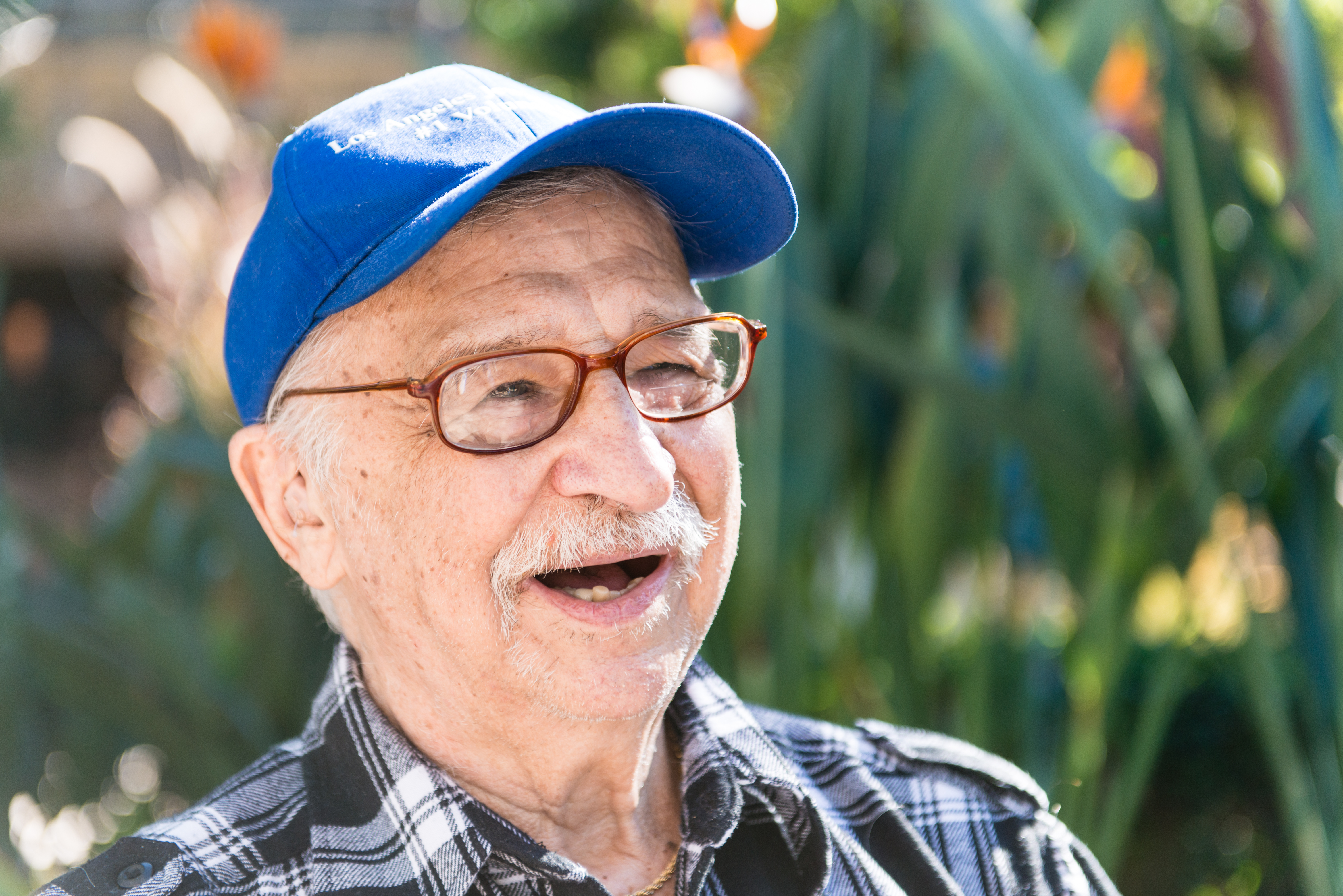 Herbert Schwartz sits in the courtyard of the Los Angeles Jewish Home in Reseda, Calif. in March 2016 (Heidi de Marco/KHN)

In the meantime, people who need long-term care are depleting their savings or transferring their assets to others so they can qualify for Medicaid. Long-term care insurance rates are rising, and many seniors find they can no longer afford policies they purchased long ago.

In California, seniors typically can qualify for Medi-Cal if their yearly incomes are under $16,395. To get long-term care through Medi-Cal, they also must show a need for assistance with certain “activities of daily living,” such as dressing or bathing. Incomes can be higher if seniors can demonstrate medical need and have spent much of their savings, with some exemptions for homes and other assets.

When Nickerson, 85, realized a nursing home bed was too expensive, he sought guidance from an attorney, who helped him take his wife’s name off their home and take their assets out of her name. Then Nickerson applied for her to receive Medi-Cal, and he helped her move into a Turlock nursing home near the one where she once worked.

Now, Nickerson said he pays about $1,700 a month from her Social Security, and Medi-Cal picks up the rest of the tab, he said. Nickerson said his wife, now 84, is getting the care she needs, and he can’t imagine having her anywhere else.

“It is absolutely the best place for her,” he said. “She needs help 24 hours a day.”

If more middle-class Californians like the Nickersons seek help from Medi-Cal, however, the program could be overwhelmed and unable to help the people who need it most, said Joanne Handy, CEO of LeadingAge California, an advocacy group that represents nonprofit nursing homes.

“The pressure on the state Medicaid budget, not only here in California but across the country, is just going up, up, up,” she said. “If you put on top of that more and more what we call middle-income Californians spending down and then going onto Medi-Cal, it is just a crazy policy.”

Salo, of the National Association of Medicaid Directors, said people shouldn’t have to impoverish themselves to get financial help paying for long-term care, but states cannot afford to cover the care for everyone who needs it and are trying to come up with ways to control spending.

More than a dozen states, including California, are contracting with managed care companies to provide both medical care and long-term care services to their Medicaid beneficiaries. These services can range from nursing home care to at-home assistance with bathing, chores and transportation to medical appointments.

States are hoping that contracting with managed care plans will help save money, improve care and better coordinate services for seniors. But some health advocates say that managed care organizations — traditionally geared towards providing only medical care — aren’t necessarily prepared to offer other forms of care such as bathing or cooking and could end up restricting services or providers to save money.

California recoups some of what it spends on nursing homes and other services by collecting what it is owed from people’s estates.

“We can’t do both — serve as a payer of last resort and let people keep their assets,” said Jennifer Kent, head of the state’s Department of Health Care Services.

The state has been holding informational hearings in Sacramento this year to brainstorm about other ways to grapple with long-term care costs in California. “It all falls to Medicaid, and that is problematic,” said state Sen. Carol Liu (D-La Cañada Flintridge).

Several organizations, including the SCAN Foundation, the Urban Institute and the Bipartisan Policy Center, also have been working together to come up with possible solutions. These could include new insurance options that would take some burden off Medicaid.

About 1.4 million people are in nursing homes nationwide, and about 62 percent of those beds are paid for by Medicaid. 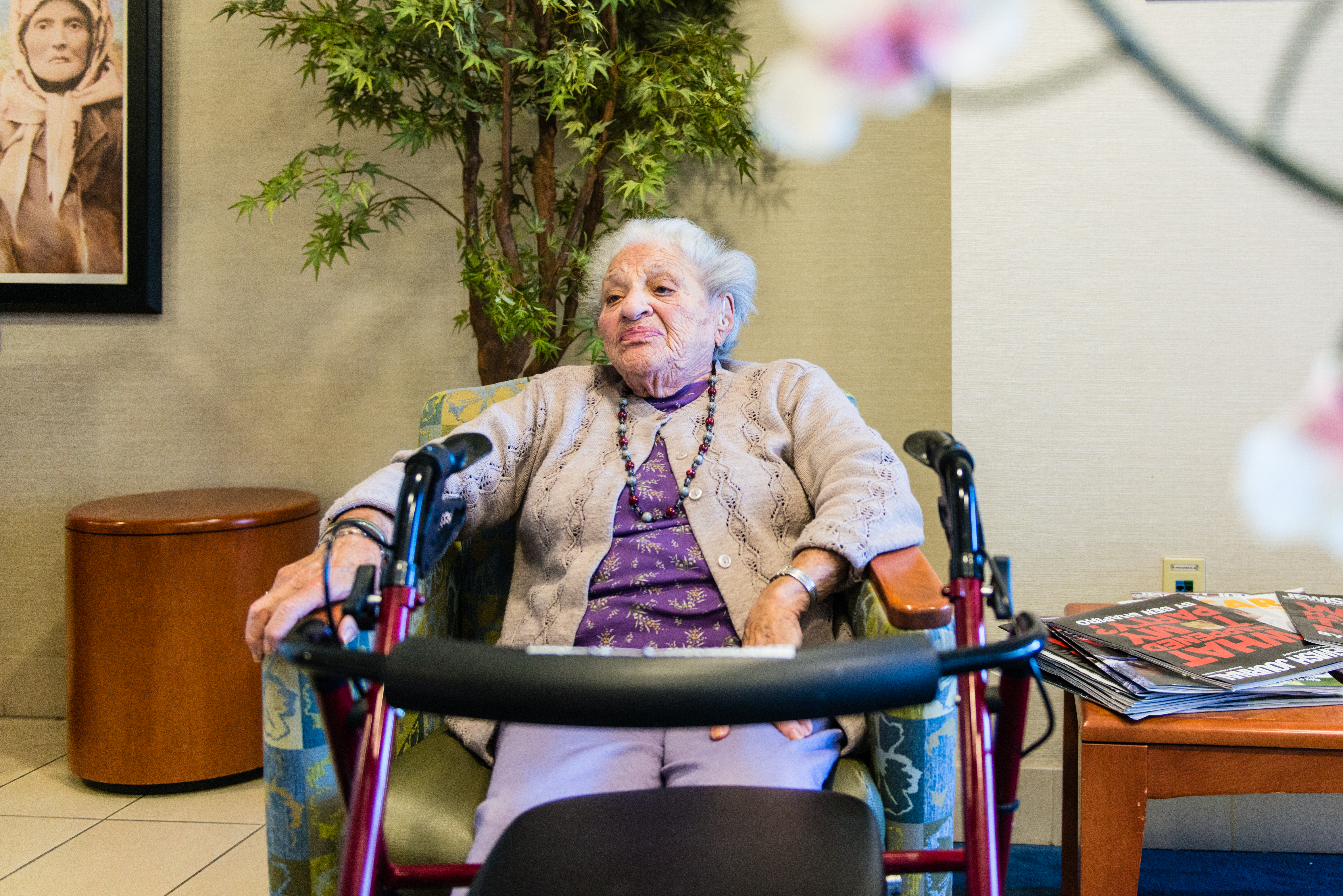 The percentage is even higher at the Los Angeles Jewish Home in the San Fernando Valley, where about 85 percent of the beds are paid for with Medi-Cal dollars. Some of the residents “exhaust every penny they have” to be able to afford the care, said CEO Molly Forrest.

Sitting in a courtyard at the nursing home, Josephine Rudolph, 99, said she gets help with dressing and bathing. Rudolph, who still loves to read, said Medi-Cal has paid for her to live at the home since 2005. Otherwise, she said, she couldn’t afford it.

Herb and Judie Schwartz, both in their 80s, also rely on Medi-Cal to live at the Jewish Home. Family photographs cover their walls. An oxygen tank and a walker sits in a corner. Just above the bed is an emergency tab that notifies the nurse’s station if the couple needs help.

They moved to the Jewish Home about four years ago after Herb Schwartz, a former computer program analyst, had a fall and it was no longer safe for the couple to live at home.

“I don’t know where we would have been without Medi-Cal,” said Judie Schwartz, a retired teacher. “We would have probably ended up with one of our kids. I love them but I can’t imagine having to live with them.”

Long-Term Care Is An Immediate Problem — For The Government