CHARLOTTE, N.C. — Roughly half a million North Carolinians could soon lose money they depend on for health insurance. The U.S. Supreme Court will rule soon on a key part of the Affordable Care Act. It governs federal subsidies for insurance in states like North Carolina that did not set up their own exchange or marketplace. The result could be disastrous for many low-income Americans and for insurance markets in about three dozen states. 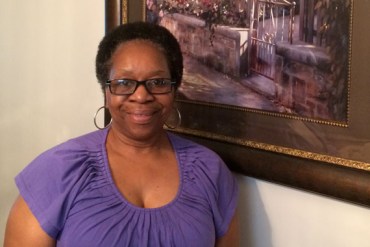 Harlena Harris pays about $20 a month for health insurance, but the subsidy to help her afford coverage is in jeopardy.
(Photo by Michael Tomsic/WFAE)

A few years ago, Harlena Harris lost her health insurance after she stopped working to care for her husband, who was battling lung cancer.

“He couldn’t even raise his hands or do anything for himself,” she says. “I had to feed him. I kept him clean. I did everything for him.”

As he got better, her own health deteriorated. The 62-year-old has Type 2 diabetes and high blood pressure. Without insurance, she couldn’t afford her medications.

“When I did get to go to the doctor, I was very, very, very ill,” she said. “My doctor told me that she didn’t know how I was still standing.”

That doctor’s visit was the first thing Harris did after getting insurance on the Obamacare exchange in 2014. Since then, she’s been doing much better with the help of doctor’s visits and medication.

She can afford it because of a federal subsidy that leaves her paying about $20 a month for insurance. Across North Carolina, more than 90 percent of people insured through healthcare.gov receive a subsidy.

But the Supreme Court case King v. Burwell has put those subsidies in jeopardy.

“I think there is a reasonable argument that the statute is ambiguous,” said Neil Siegel, who teaches constitutional law at Duke University in Durham, N.C.

In one section of the Affordable Care Act, it reads that subsides are available through “an exchange established by the state.” But North Carolina and about three dozen other states decided not to establish an exchange. They use the federal healthcare.gov instead.

Siegel says here’s where it get complicated.

“There are other provisions of the law that don’t really make a lot of sense if the subsidy is invalidated,” he says. “There are reporting requirements that require federal exchanges to report on the subsidies that individuals are receiving.”

Also, the whole point of the exchanges is to make it easier to buy health insurance.

Sara Collins is vice president of the research group The Commonwealth Fund. She said if the Supreme Court strikes down subsidies in states like North Carolina, “it would likely completely eliminate the gains that we’ve seen in insurance coverage over the past five years.”

North Carolina ranked seventh in the nation for the percentage of people eligible for ACA insurance who actually signed up. Across the state, about half a million people would lose subsidies. Collins said that would make insurance unaffordable for most of them.

That’s across states that use the federal exchange.

Here’s why: healthier people drop out of insurance pools first, then insurance companies raise premiums to cover the costs of the remaining, sicker customers, “which then leads to more people saying I don’t want to pay those premiums, and you can get sort of this spiraling effect or death spiral that leads to the collapse of the market,” Saltzman said.

To be clear, that’s the individual market, which includes people buying from the exchanges or directly from an insurance company.

Most people get insurance through their jobs, and their premiums shouldn’t be affected, sayd anaylst Collins of Commonwealth.

“The employer market is pretty much walled off,” she said.

Think of it as a separate pool. Insurance companies set premiums for each based on only the costs for that pool. The bottom line is this: for anyone not covered through work, Collins and Saltzman say health insurance could become exorbitant.

The decision could also have a large impact on hospitals.

“If suddenly a lot of people who are currently insured become uninsured again, that really leaves hospitals in the crosshairs,” says Caroline Pearson of Avalere Health, a consulting firm.

The health law included payment cuts to hospitals since, in theory, more people would have insurance and therefore be able to pay for their care. Those cuts don’t go away if the Supreme Court strikes down the subsidies and insurance rates plummet.

Pearson said the result could be some hospitals with thin margins closing.

“These are the providers of last resort, and they are often the only place that low-income uninsured people can go to get care – I mean, that’s why folks show up in those emergency departments,” she said. “And so to put more fiscal strain on those providers is a very dangerous thing in terms of maintaining a safety net.”

In Charlotte, Harlena Harris’s subsidy is nearly $700 a month. Without that, she says she couldn’t afford insurance.

“Don’t just take it away and we’re setting here in limbo,” she said, addressing state and federal officials. “Have something ready to go in place.”

A few states are aiming to protect their subsidies by creating a state-supported exchange – basically, sticking with the healthcare.gov website while taking on more responsibility on the state level such as regulation and consumer assistance.

When asked about a backup plan for North Carolina, Governor Pat McCrory’s administration said that it is closely monitoring the case.