It would be easy to confuse Dr. Mitch Katz with any other doctor at the Roybal Comprehensive Health Center in East Los Angeles. His desk in a closet-sized, windowless office is littered with patient records, X-rays and cans of Diet Coke. 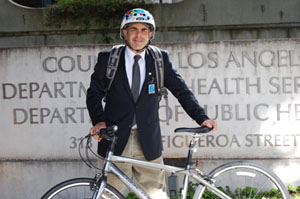 His everyman demeanor belies his stature: As director of the county’s Department of Health Services, Katz oversees LA’s public hospitals and clinics, the health care of last resort for millions of low-income Angelenos. He has 22,000 employees and a $3.7-billion dollar budget.

Los Angeles, the nation’s second largest city with some 2 million uninsured residents, has long had one of the most disorganized systems. To fix it, Katz, the former director of San Francisco’s health department, insists on seeing patients at this public health clinic one afternoon a week. It’s a demand that struck many as odd, if not impossible. How would Katz have time to treat patients with a system in ruin? Katz is starting one clinic at a time.

On a recent morning, Katz sits opposite his patient, a middle-aged man who is a bundle of nerves. Katz speaks Spanish with his native Brooklyn accent and patiently explains the possible causes of his tumor and what he hopes a visit to a lung specialist will reveal.

“I wanted him to know that he would never be abandoned or alone figuring it out. My view is that this lowers people’s anxiety levels and they don’t wind up in the emergency room because now they’re very frightened about what they have. They need a plan,” he explained.

Katz’s primary aim though, and what he came to Los Angeles to do, is to steer low-income Angelenos away from the overburdened emergency rooms they’ve long relied upon and into primary care clinics where costs are lower, chronic diseases can be managed and problems, like a tumor, can be detected earlier.

He says that when he took the job, “they sent me the LA org chart. I said, ‘Where’s primary care?’ They said, ‘Well, it’s under the hospitals.’ [I said] ‘Well, that may explain why you have a problem with primary care!’

It didn’t take long for that to change: In the last six months, his team has assigned nearly 250,000 people to a primary care doctor at county clinics, he says, adding: “I didn’t have to hire a single additional doctor. What I did is say: ‘No, we’re not running this anymore as a drop-in, see-who-you-see-and-no-one-is-responsible’ system.”

Katz’s predecessors promised many of the same reforms, but government observers here say they were stymied by a Board of Supervisors which often governs Los Angeles like five competing fiefdoms.

But Michael Cousineau, a professor at the University of Southern California’s Keck School of Medicine, says those supervisors are scared of what’s to come. Under the health law, many of those currently uninsured are expected to be covered beginning in 2014. When that happens, the federal government will reduce the extra money they now give to public hospitals to offset the burden of caring for these patients.

One report commissioned by the county put it bluntly: If LA loses its paying customers and is left treating only undocumented immigrants, the financial survival of its health system is at stake. Cousineau argues that to move the system from one of  “last resort to a system of choice is not going to be an easy thing. But the price of failure is: thousands of people losing their jobs, closing of health centers and hospitals. So that’s what the supervisors have to grapple with.”

Gloria Molina, who represents East Los Angeles, is one of the supervisors, each of whom represents more voters than some U.S. senators do. She is supremely and ununusally confident in Katz:  “I was one that was worried he was just going to be another guy that just took us so far and then would leave us. But instead he’s had the most daunting challenges and he’s meeting all our expectations.”

One test of Katz’s vision for re-making LA into a desirable public health system is taking place at the heart of where it all went terribly wrong. The Martin Luther King Junior-Harbor Hospital in South Los Angeles closed in 2007 after it reached near-Third World standards and one woman died of egregious errors.

It’s now re-opened as a clinic where patients with chronic diseases are counseled by a team of nurses and medical assistants. The clinic’s nurse manager, Kimberly Thomas, says customer service is now a top priority: “They’ll bring patients who have diabetes and high cholesterol then bring them in again and look at their labs and see if they’re improved or gone down.” She says patients love the gifts they get if they improve their test results.

Assigning low-income patients to a medical home makes for better medicine, but whether it engenders goodwill – and loyalty – when these same patients gain insurance is an open question.  And this may, in fact, be Director Katz’s greatest challenge: giving Angelenos a reason to believe in what the county can offer.

“Someone will talk to me about their medical problems, and I’ll start asking them about what’s going on in their marriage, with their kids, in their home and people will begin to cry,” says Katz. “People will begin to tell you amazing things about what are really the issues. And often the physical symptom both to you and to them is just the opening salvo in a conversation that they want to have with someone who cares about them.”