Louisiana health officials announced Monday that five health plans won bids to manage care for 892,000 low-income Medicaid patients — a first for the state that will be worth an estimated $2.2 billion in new revenues for the companies. 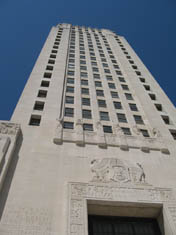 The announcement is the latest step in a four-year march to managed care. “This has been a long time in the making,” said Bruce Greenstein, secretary of the Department of Health and Hospitals and a former Microsoft executive, in a call with reporters.

The state chose plans that had “significant experience” running Medicaid plans in other states and that had succeeded in changing “the behavior of enrollees” and doctors to drive costs down, he said.

Managed-care companies could save the Louisiana Medicaid program as much as $135 million a year compared to current spending.

The companies, which can accept patients statewide, are Centene, AmeriHealth Mercy of Louisiana and AmeriGroup. All three specialize in treating Medicaid patients. Also, UnitedHealthcare and Community Health Solutions won bids to run managed-care plans under a different set of rules that would limit their financial risk  in caring for patients.

Greenstein said one reason more recognizable insurers in Louisiana like BlueCross didn’t bid on the contracts is the uncertainty created by the federal health law. “This is a time of unprecedented disruption as large insurers are trying to figure out how the Affordable Care Act will impact the insurance industry,” he said.

More than 1 million people in Louisiana are covered by Medicaid. People living in nursing homes, individuals who are also eligible for Medicare, and some other groups won’t be required to enroll in managed-care plans. Louisiana Medicaid is projected to spend about $6.7 billion next year, with about one-third passing through the managed-care firms.

The new business in Louisiana could mean a 6.1 percent increase in earnings-per-share for Centene and a 12.4 percent jump for AmeriGroup in 2012, according to a research note by Joshua Raskin, a Barclays Capital financial analyst. The companies must build networks of doctors and pass a review process with the state before signing contracts.

While the Louisiana move represents a big dollar amount, Raskin reminded investors that it represents only3 percent of the total amount of new revenues that will go to managed-care companies as states move more Medicaid members to their rolls.  More than 20 states are planning to expand managed care soon.