NORTHPORT, Maine – By the time Laura Tasheiko discovered the lump in her left breast, it was larger than a grape. Tasheiko, 61, an artist who makes a living selling oil paintings of Maine’s snowy woods, lighthouses and rocky coastline, was terrified: She had no health insurance and little cash to spare. 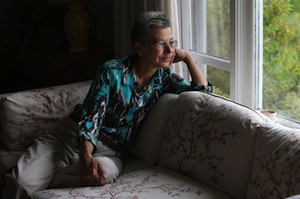 Laura Tasheiko, 61, sits in her home in Northport, Maine (Photo by Joel Page for USA TODAY).

But that was nearly six years ago, and the state Medicaid program was generous then. Tasheiko was eligible because of her modest income, and MaineCare, as it is called, paid for all of her treatment, including the surgery, an $18,000 drug to treat nerve damage that made it impossible to hold a paintbrush, physical therapy and continuing checkups.

But while much of America saw an expansion of coverage this year, low-income Maine residents like Tasheiko lost benefits. On Jan. 1, just as the Affordable Care Act was being rolled out nationwide, MaineCare terminated her coverage, leaving her and thousands of others without insurance.

Maine Gov. Paul LePage’s decision to shrink Medicaid instead of expanding it was a radical departure from a decade-long effort to cover more people in this small rural state of farmers, lobstermen, craftsmen and other seasonal workers, which at least until recently, boasted one of the lowest rates of uninsured in the nation.

Maine was the only state ­in New England, and one of 23 nationally, to decline federal money to expand Medicaid under the federal law. In most of those states, Republican lawmakers or executives argued that Congress could withdraw the health law’s funding and that their states couldn’t afford the expense. Many also objected to expanding a program they regard as broken.

“It’s nerve-wracking,” said Tasheiko, who like many working poor in this rugged state makes ends meet by raising laying hens, heating her home with a woodstove and eating and canning vegetables she raises in her garden. “Cancer doesn’t just stop — it’s not over. But my health coverage is over.”

LePage’s decisions are also having ripple effects on safety net hospitals and clinics, which are reporting a surge in uninsured patients, including many who are so poor they cannot pay even a nominal $10 to cover a fraction of their care. Many hospitals have already cut staff to trim costs. Others have reduced pay and hours.

“The really sad part about it is that Maine used to lead the nation with regard to health coverage, and now we’re way behind,” said Sara Gagne-Holmes, executive director of Maine Equal Justice Partners, an advocacy organization for poor and low-income residents, noting the state’s motto, “Dirigo,” is Latin for “I lead.”

“We were among the first to provide subsidized coverage for low-income people —Massachusetts built off what Maine did,” Gagne-Holmes said.

The Maine experience underscores how precarious the health law’s safety net became after the 2012 Supreme Court ruling that states could opt out of expanding the insurance program for the poor. As a result, millions of the nation’s poorest adults remain uninsured because of state politics and budget concerns.

Even in a state with a strong social welfare tradition like Maine, a quirky election — like the five-way gubernatorial race that brought LePage to power in 2010 with 38 percent of the vote — can alter policies that affect thousands of people.

Maine’s Democratic-controlled state legislature has passed five Medicaid expansion bills with bipartisan support, said Rep. Mark Eves, speaker of Maine’s House of Representatives. But LePage, who is up for re-election this fall, vetoed each one, calling them “ruinous” for the state’s future.

LePage’s spokeswoman Adrienne Bennett explained his decision with a familiar refrain. “We can’t afford it,” she said.

Under the Affordable Care Act, the federal government is picking up the entire cost of new enrollees for the first three years and never less than 90 percent thereafter.

But Bennett said there is no guarantee the government would honor that pledge.

“They have rolled back on their Medicaid promises in the past,” she said. “We’re going to be footing that bill. It could be a matter of years, it could be less than that. It’s not a guarantee.”

LePage’s policies represent a stark turnabout from those of his predecessor, John Baldacci, a two-term Democrat who had campaigned on a pledge to deliver universal health coverage to state residents.

Baldacci signed the Dirigo Health initiative in 2003— a plan that prefigured both Massachusetts’ coverage expansion  as well as the Affordable Care Act—expanding Medicaid to more poor and low-income residents, not just those with dependent children or the disabled, while offering subsidized private coverage to middle-income residents.

The subsidies, which were funded through a tax on private insurance, were phased out at the end of last year as the federal health care law’s subsidized coverage took effect.

Nearly one-quarter of the state’s residents eventually enrolled in Medicaid, which consumed 29.6 percent of state spending by 2010. But Maine struggled with budgetary shortfalls and fell behind on Medicaid payments to hospitals.

After LePage, a brash tea party businessman, was elected on a platform of fiscal responsibility, he pushed through $400 million in tax cuts, settled the $183 million owed to hospitals and severely restricted Medicaid eligibility, cutting 14,500 parents and roughly 10,000 childless adults off MaineCare at the end of last year.

Had the state expanded Medicaid with federal funds, an additional 45,000 people would have gained coverage.

‘A Double Whammy’ For Providers

But yanking a patient’s Medicaid card doesn’t mean they won’t get sick.

When Tasheiko had worrying symptoms recently, she went to Waldo County General Hospital in nearby Belfast and was accepted into their charity care program.

Gail MacLean, 64, who boards horses on her farm in Gray, 20 minutes from Portland, was also cut off of MaineCare because she doesn’t have dependent children. Although she is hardy, she said, “It’s one thing after another on a farm.”

In early June, MacLean was fixing one of the barn’s Dutch doors when a gust of wind blew the top part of the door shut and it slammed into her head. When her headache didn’t go away, she saw a doctor at Care Partners, an affiliate of Maine Medical Center in Portland, that charged her $10, and a CT scan was ordered, the cost of which will likely be borne by the hospital.

Meanwhile, hospitals are already hurting because of declining government reimbursements, which were supposed to be offset by payments from the newly insured. In Maine, the decision to trim the Medicaid rolls is straining resources for charity care.

That’s already had an impact on the bottom line, said Maine Hospital Association spokesman Jeffrey Austin. In a normal year, about one-third of the association’s 36 acute-care hospitals finish the year in the red, but 24 had negative margins last year.

Similar strains are evident at Portland Community Health Center, a federally qualified health center where more than half the patients are immigrants. Last year, roughly half of the center’s patients were on MaineCare and about one-third had no insurance. In one recent month, over half were uninsured,  according to CEO Leslie Clark Brancato.

“We’re really struggling with what to do,” she said.

Vanessa Santarelli, CEO of the Maine Primary Care Association in Augusta, the umbrella group for  community centers which provide care to one in seven state residents, calls the combination of failing to expand Medicaid and terminating coverage “a double whammy.”

“We’re very proud and want to provide services and access to more people,” Santarelli said. “But there is a breaking point, and we’re getting close to it.”

Maine Rolls Back Health Coverage Even As Many States Expand It