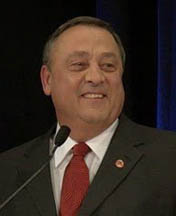 “The only government system that worked was the GI Bill because it provided checks to those who sought the American dream on their own,” LePage, a Republican, said in a talk at the conservative Heritage Foundation on Monday. Tops on his list of failed government programs: Social Security. “It’s broken and headed for disaster,” he said.

Maine’s program, DirigoChoice, was enacted in 2003 with hopes it would help achieve universal coverage in the state. It was made available to individuals and employees working at small companies and was funded through an assessment on private insurers. The program fell far short of its goals largely because it never received total funding, said Dirigo executive director Karynlee Harrington.

The program, which will end in 2014 to coincide with federal health law’s Medicaid expansion and start of new insurance exchanges,  has covered about 35,000 people, though only about 10 percent were previously uninsured.

LePage is moving to replace Dirigo with “market-based reforms” which include allowing Maine residents to buy coverage sold by insurers in other New England states. Many Republicans like this idea, which is loathed by many Democrats and consumer advocates who say purchasers won’t be as well protected.

LePage said if Maine residents can buy policies sold in other states they can avoid paying for unnecessary benefits mandated in their home state. At present, he said, nuns may have no choice but to buy insurance coverage with maternity benefits. “We should have exempted them, and if they get in trouble they can call the Pope,” LePage said.