AUSTIN, Texas — My application for Medicaid in Oklahoma was denied. That’s no surprise, but this is: It took all of 11 minutes to find out — from clicking on the state’s enrollment website to receiving the decision — about the same amount of time invested in launching my Netflix account. 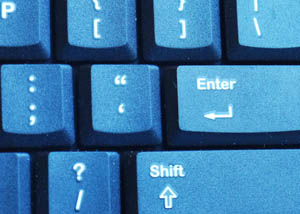 That’s because the state is the first to fully automate enrollment in Medicaid, the state-federal partnership that provides health coverage for low-income people. Such automation is a key ingredient in making the federal health overhaul law a success.

The law will steer about 16 million people into the program for the first time as eligibility expands to higher earners. Millions of others will get health coverage through state- or federally-run “health insurance exchanges,” and many of them will have to pass through a Medicaid enrollment process to qualify for subsidized premiums — a laborious and time consuming journey in many other states. And, given that Medicaid will be extended to individuals earning up to $43,560, dragging them through a state welfare office is considered a hard sell.

The state expects at least 250,000 new enrollees as a result of the health law, bringing the total up to 1 million. That could have meant a lot of state workers, and a long, long paper trail. Fogarty, speaking at a Medicaid IT conference here, says the new system will allow the state to add those people quickly: “The nice thing about computers is volume is not a problem.”

Fogarty and his colleagues are clearly proud of their work. The authority posted a promotional video in which staff members play the roles of women who enroll in Medicaid while sitting around the living room for a chat.

Oklahoma may be ahead of the curve in making Medicaid enrollment a “first class customer experience,” as required by the health law. But, ironically, the state is among the handful that has rejected federal entreaties to build health insurance exchanges. A law to authorize the exchange fell flat in the state legislature during the spring session.

In fact, the state had to turn down a $54.5 million federal grant — to develop it’s exchange and serve as a role model for other states — when officials there turned against any vestige of the health law.

Richard Evans, the director of the Oklahoma agency’s automation efforts, said his colleagues are “modifying” the system to “be ready for the exchange” even though politics lag behind. Fogarty said members of his staff — a semi-autonomous state agency — continue to meet with federal officials to discuss exchanges.

Oklahoma’s high-speed enrollment system was built using federal grants issued several years ago that were not part of the health law. But, aside from a handful of states, including Oklahoma and Wisconsin, few have updated Medicaid enrollment systems in recent years.

Many states still use systems up to 40 years old, some of which were built shortly after Medicaid began in 1966 and computers took up entire rooms, said Susan Arthur, vice president of U.S. health care for Hewlett-Packard Enterprise Services. HP, which helped build Oklahoma’s system, is looking forward to a wave of updates prompted by a health law rule that will steer an extra $2.2 to 3.6 billion to states to create such systems.

“The automation that will happen will be about dealing with the 32 million people” who will gain coverage as a result of the law, said Arthur, who expects about 25 states to pursue similar systems in coming years. “For any state to handle this volume, they’re going to have to get effective automated enrollment.”

The Kaiser Family Foundation released a survey in June of what states are up to in this area. While 32 states allow users to submit applications online, no other has yet figured out how to verify the data — a sometimes complicated exchange of information with other agencies — and actually enroll, or deny, a potential Medicaid recipient. (KHN is an editorially-independent program of the Kaiser Family Foundation.)

To be sure, Oklahoma’s system isn’t perfect. For example, the Web portal works with Microsoft’s Internet Explorer, but not with Apple’s Safari browser.

Evans said his technical staff is working out such issues. One younger staffer, he said, told him older people might use Internet Explorer, but they had to make the portal work with Mozilla Firefox, too.

“What the hell is that?” Evans recalled asking.

Making Medicaid As Easy As A Netflix Membership