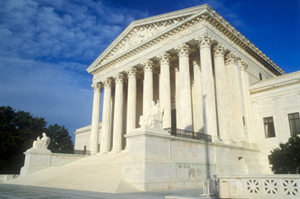 Many lawsuits have been filed seeking to overturn the mandate, and the issue is expected to eventually wind up at the Supreme Court. (Getty Images)

With Republicans vowing to dismantle the health law and courts wrestling with its constitutionality, some health policy experts are pondering a possible “Plan B” in case the individual mandate  the requirement that everyone get health insurance starting in 2014  is weakened or struck down.

One idea is to raise everyone’s taxes  and then give big tax breaks back to people who get insurance. Other proposals include creating strict open-enrollment periods so that people can’t game the system, or an opt-out mechanism carrying stiff consequences for people who decline to get covered.

It’s far from clear, however, that any political consensus could be reached on tweaking or replacing the mandate. Many advocates of the mandate say it’s still the best way to get as many people covered.

In addition, some economists and policymakers are concerned that the mandate’s penalties were watered down too much during the arduous congressional debate.

Gail Wilensky, a former director of Medicare and Medicaid under President George H.W. Bush, has suggested that well-crafted carrots and sticks could get the same job done. As a model, she pointed to the Medicare drug benefit that charges people more if they don’t get coverage when they become eligible, but decide to get it later. That template could apply for health insurance too, with the penalty lasting for three to five years.

“The idea is to raise the ante for people who wait until they are sick to buy insurance,” Wilensky said. “That would change the dynamics and may be more effective than a wimpy mandate,” she said.

The mandate is intended to expand coverage, prevent the uninsured from passing the costs of their care to everyone else, and make insurance markets work better by having risk shared by old and young, sick and healthy.

Critics on both sides of the political spectrum have assailed the mandate. Conservatives have attacked it as government coercion while some on the left see it as a giveaway to private insurance companies that would profit from the business created by millions of new customers. Many lawsuits have been filed seeking to overturn the mandate, and the issue is expected to eventually wind up at the Supreme Court.

“The mandate’s been oversold,” said Mark Pauly, a health care economist at the University of Pennsylvania’s Wharton School who was one of the scholars who initially put forth the individual mandate idea while also serving in President George H.W. Bush’s administration. He still supports the concept, if properly designed.

“My view is that this (mandate) is much more symbolic. The actual penalties involved are relatively mild,” he said, and aren’t big enough to compel “people who are reluctant to pony up for insurance anyway.”

Pauly also criticized the way the law paired the mandate with new rules he regards as too expansive.

For example, it will be too easy, in his view, for people to delay buying coverage until they get sick  and without paying much more if they are older or sicker, precisely the behavior that the overhaul is supposed to discourage. Pauly has advocated having some of the sickest people covered in special highrisk pools.

The insurance industry accepted new rules and regulations, including the requirement that they sell health plans to people with preexisting conditions, because the mandate would enhance its market.

Princeton sociologist Paul Starr, who was a senior health adviser to President Bill Clinton, anticipated the risk of political backlash even before health law was passed. He outlined a more flexible alternative aimed at quelling political fires while still expanding the insurance pool.

Except for the poor (people making less than $9,350 and couples earning less than $18,700 are not subject to the mandate but would be eligible for coverage under Medicaid), people would have three choices, Starr said. They could buy insurance, with subsidies if they qualify. They could pay an annual tax penalty for going uninsured. Or they could opt out with no penalty  but they couldn’t opt back in for five years.

Those who opt out wouldn’t be eligible for any subsidies in the exchanges. And under this scenario, they wouldn’t be covered by one of the most popular protections in the legislation — the ban on insurers excluding people with pre-existing conditions. People who opted out could still shop for insurance, but there would be no guarantee that they could find an insurer to cover them, at a price they could afford.

Despite what happens to the mandate, there’s a lot more to the health law, noted John Holahan, director of the Health Policy Center at the Urban Institute.

Without the mandate, he said, there probably would be more free riders, whose costs would be passed onto taxpayers and insured consumers. But of the 32 million people projected to gain coverage, the majority will either be eligible for expanded Medicaid or subsidized policies they can buy in the exchange. The exchange itself, along with new rules for insurers, will change the nature of the insurance market.

The expansion of “Medicaid would stay. Subsidies would stay. Some healthy people won’t take them (subsidies) up, but the market will be a better market than it is today,” Holahan said. “I think you’d end up getting a lot of coverage through exchanges.”

Pauly, who has seen Republican enthusiasm for the individual mandate ebb and flow over the years, still thinks the idea is crucial. “You need a mandate because there will be some Evel Knievels of health insurance.” Risk eventually catches up with the risk takers, he said. And when that happens, someone pays.

Experts Ponder ‘Plan B’ Options For The Individual Mandate