Vickie Fleisher-Gann had been trying since Oct. 1 to complete her Obamacare application so she could start shopping for insurance on healthcare.gov, but she kept getting stopped by error messages. With her policy expiring at the end of the year, she feared time was running out.

On Sunday morning, the former Harrisburg, Pa., hospital administrator finally was able to complete her application, shop for a plan and enroll — all within about 30 minutes. “I was shocked when it worked,” said Fleisher-Gann, 61. “I just couldn’t believe it.”

The Obama administration had promised since late October that its crippled online portal would work for most people by Nov. 30. And consumers in Pennsylvania, Michigan, Oklahoma and Ohio said in interviews that they did notice a big difference when they tried to sign on. Like Fleisher-Gann, many people who have been stymied completing their application were able to finish them and for the first time, start shopping for plans.  Not everyone had that experience, however.  And some insurers warn that back-end problems that have left them with inaccurate consumer information have yet to be fixed with less than 30 days to go before the new policies are supposed to take effect.

The federal online marketplace at healthcare.gov is for people in 36 states who are shopping for individual health insurance. Fourteen states are running their own online exchanges. Consumers have until Dec. 23 to be enroll for coverage by Jan. 1, but for those who miss that deadline, enrollment will continue until March 31.

One of the biggest changes on the federal website is a new queuing system that, during peak usage periods, will offer consumers the choice of waiting in line, or receiving an email when there is enough capacity to handle their applications.

Another is a new “reset” button that asks users if they’d like to scrap their old applications and start anew. The system recommends this for people who have faced error messages with their initial applications.

That’s what Fleisher-Gann did.  She filled out a new application, answering about 25 questions including providing her name, address, phone number and Social Security number. The application also asks a security question, such as the location of a first job or the middle name of an oldest child. If a consumer is applying for federal subsidies to lower their insurance costs, they must also answer questions about their household size, current income and estimated 2014 income. They must also certify all the information is true.

Within seconds of submitting the application online, Fleischer-Gann received a notice that she was approved for a subsidy and that she could start comparing more than a dozen plans. She chose a Highmark policy that will cost her $293 a month after the subsidy, slightly more than she pays now. But the new plan has richer benefits and lower out-of-pocket costs.

“I am so relieved,” she said, adding that she had been receiving coverage through a special high-risk pool created under the health law, which expires in December.

Gina Holub, 47,  of Richboro, Pa., said healthcare.gov also worked for her Sunday, after her application had been hung up since October. “I figured I would give it another try, given that they said the fixes would be done by end of November,” said Holub, a freelance market research analyst.

It took her 15 minutes to complete a new application and another 45 minutes to choose a plan from Independence Blue Cross, which includes dental coverage — and she will pay $750 a year less than she does now. Her old insurer was canceling her policy as of Jan. 1. “It’s so exciting to get better insurance at a lower price,” she said.

Both Holub and Fleisher-Gann noted how the improved healthcare.gov makes it easier to compare plans’ prices and benefits. Consumers can sort plans by price, total out-of-pocket costs and the name of the insurer.  Users can click one button to learn what doctors and hospitals are in each plan and click another to determine which prescription drugs are covered and at what price. The co-pays for primary care and specialist physicians, as well as for generic drugs, are also easy to find, they said.

“Never underestimate the power of the Hanukkah Miracle,” said Jodi  Ray, project director for Florida Covering Kids & Families,  the largest group of navigators in south Florida who are helping people enroll in coverage.  Ray said she has done several applications since Sunday and “zoomed right through the process.” Hanukkah, the eight-night Jewish holiday of lights, started last Wednesday night.

Not everyone was successful, however. Philip McHugh, 61, of Durham, N.C., said that even though he was able to reset his online application, he still received an error message each time he tried to submit it. “This website is a piece of junk,” said McHugh, whose current policy expires at the end of the year. He said if he can’t get on the website, he may have to buy an exchange policy from an insurance agent. He worries that he may not find as good a deal. He said he tried phoning a call center but the operator was unable to help him.

Fabienne Pierre, a navigator employed by the Sickle Cell Foundation of Palm Beach County & Treasure Coast in Florida, said she too has noticed the website is working better after weeks of difficulties. “I have had luck with completing applications and viewing the eligibilities and plans,” she said.

Pamela Walker, director of the St. Louis City Health Department, said Monday she is relieved both personally and professionally that the site is finally working as promised. She was able to help get her son, Nathan, 32, enrolled in a subsidized plan that will cost him a little over $100 a month. He has been in a catastrophic-type plan with a high deductible that covered little upfront. She said the entire process took 65 minutes.

Walker said with more than 50,000 uninsured city residents, the website is vital. She had been worried about publicizing enrollment events given the glitches. “I did not know what to tell people before, but now I am feeling good,” she said.

Charlene Ripley, 57, of Pawnee, Okla., actually had completed an application in early October but had been trying unsuccessfully to change her estimated 2014 income on the form for several weeks. She tried fixing it online, calling a healthcare.gov operator and sending messages through the online chat feature — all with no luck.

But on Sunday, she hit the reset button on her old application and was able to fill out a new one. By lowering her estimated 2014 income, she qualifies for a higher subsidy to lower her insurance costs. “The website was so much faster and glitch-free … so now my new application is complete and I am just shopping for the best plan now,” she said. 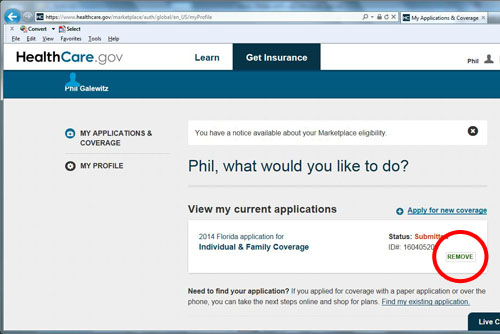 Many Consumers Report Improvements With Healthcare.gov