When Bev Marcus began shopping recently for a health-insurance plan, she found one from Premera Blue Cross on Washington’s online insurance exchange that seemed to offer good coverage at a reasonable price.

Marcus assumed the individual Premera policy would include Swedish Medical Center’s main hospitals in Seattle, just like the Premera group plan she and her husband had in the past.

That policy had covered most of $150,000 in hospital bills from her husband’s heart attack and cancer treatment a few years ago. Marcus knew she wouldn’t want to face such bills without coverage, so she called Premera to make sure the Swedish hospitals were in its network.

The answer startled her: None of the company’s individual plans for 2014 include any of Swedish’s three hospitals in Seattle or its campus in Issaquah.

But it’s no joke: Many insurers offering plans through the Washington Healthplanfinder, the exchange marketplace where shoppers can apply for subsidies, are using narrow provider networks. These networks are not the broad, include-all-providers networks that many big employer plans currently enjoy. 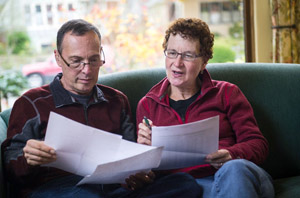 Kenneth Pick and his wife, Bev Marcus, compare health plans in their Seattle home. They are urging others to carefully look at their plans network to avoid unwelcome surprises (Lindsey Wasson / The Seattle Times).

Premera says its pared-down “value network” helps contain costs, keeping plans affordable for people who must buy their own insurance. And while skinnier networks may not always equal lower premiums, Coordinated Care, with the fewest in-network hospitals, also has the lowest prices.

If a patient needs a covered service, such as a heart transplant, but it’s not provided at in-network hospitals, insurers must cover it elsewhere.

But for patients in other circumstances, plans with lower premiums could end up costing more if they receive care from a provider outside their plan’s network.

Not only could they wind up paying most or all of the bill, they would lose the law’s cap on out-of-pocket expenses.

Premera, for example, limits annual out-of-pocket costs for in-network care at $6,350. But out-of-pocket expenses for care outside the network are “unlimited.”

Marcus and other consumers have been surprised to learn that hospitals they assumed would be in-network for major plans are not.

The Seattle retiree supports the Affordable Care Act, which established the exchanges and requires insurers to take anyone regardless of health condition. Still, she’s telling everyone she knows to check plans carefully to find out which hospitals are included.

“I’m nervous that people will sign up for plans and not realize they’re not covered,” she said. “If you’re not capped, you could lose your home.”

Left out of exchange

The narrow networks have prompted pushback from some providers, notably Seattle Children’s. It filed suit in October against the state insurance commissioner, demanding he remove from the exchange five insurers that do not include Children’s in their networks. (Molina Healthcare of Washington and Children’s have only a verbal agreement at this point.)

Hospital officials say it is “unprecedented” for major insurance plans in the local market to exclude the region’s top pediatric hospital.

But Children’s is not the only hospital left out of most exchange plans.

The Seattle Times asked the seven insurance companies selling individual policies in the exchange in King, Pierce and Snohomish counties to list their in-network hospitals.

The results show that only one — Community Health Plan of Washington — includes Seattle Cancer Care Alliance, which offers treatment for some of the most complex cancer cases in the region.

Four of the seven insurers do not include the University of Washington Medical Center or the UW’s Harborview Medical Center — which has the state’s only Level 1 trauma center and burn unit.

Community Health includes every major hospital in King, Pierce and Snohomish counties, but is the only exchange insurer that does.

By contrast, Premera and its subsidiary, LifeWise Health Plan of Washington, include many major hospitals, but not the largest Seattle-area hospitals in the two major medical systems — Swedish and UW Medicine.

Dan Dixon, a Swedish vice president, said discussions with Premera continue. “You captured us at a moment in time,” he said. “We’ll get there sooner or later.”

Doctors are starting to realize that when a hospital is cut out of a plan’s network, they also are affected.

At Seattle’s Polyclinic, a large multispecialty group, the excision of Swedish hospitals from three major insurers’ exchange-plan networks is causing some heartburn.

Polyclinic’s ob-gyns have delivered most of their babies at Swedish for years. Now, they’ll have to make other arrangements, but it’s complicated.

Premera and LifeWise have only one downtown Seattle hospital in their networks — Virginia Mason Medical Center — and it doesn’t deliver babies. And unlike Swedish, Virginia Mason doesn’t use the same electronic records systems.

“We’ve spent hours thinking: ‘So what do we do?’ ” says Polyclinic spokeswoman Tracy Corgiat. “We have evaluated — specialty by specialty — how we will handle patients who cannot be admitted to Swedish because their insurer won’t cover it.”

Somehow, they have to urge patients who are pregnant — or may become pregnant — to choose their individual plan carefully if they want a Polyclinic doctor and a Swedish delivery. Only one in-exchange insurer, Community Health, and one nonexchange insurer, Regence, cover that combination.

Patients like Marcus’ husband, Kenneth Pick, 60, whose Polyclinic doctors admitted him to Swedish, face another challenge.

Only one cardiologist at Polyclinic now has privileges at Virginia Mason, and others are applying. But Corgiat said it’s really difficult for doctors to cover more than one hospital because privileges come with obligations, including being on call for emergencies.

It’s not clear yet how it’s going to get worked out, she said, and in the meantime, some patients may face tough choices.

One 63-year-old patient, who asked to remain anonymous, said her orthopedic specialists are in one network, and her dermatology specialists in another.

“How do I choose?” she asked. “I think I’m pretty informed, but I had no clue how limited these networks are.”

Like Marcus, Polyclinic’s Corgiat worries that people won’t do their homework. “Our priority is to tell people: ‘You need to look at those networks before you choose.’ ”

The narrow networks have also drawn scrutiny from regulators.

Washington Insurance Commissioner Mike Kreidler’s office initially rejected five of the nine insurers that applied to sell plans inside the exchange. One of them, Coordinated Care, was initially rejected largely because its provider network was deemed “inadequate.”

Among the insurance commissioner’s concerns was that Coordinated Care’s network did not include a pediatric hospital or a Level 1 burn unit (available only at Harborview).

But when the company appealed its rejection, an administrative-law judge ruled against the Office of the Insurance Commissioner, ordering regulators to help the company qualify. The board of the Washington Health Benefit Exchange, which operates Healthplanfinder, also urged Kreidler’s office to negotiate.

The company’s plans were approved.

During Coordinated Care’s appeals hearing, company officials testified they felt confident their provider network would be sufficient. On the rare occasion when a patient needs care not available from a network provider, the company said it would cover costs without additional financial burden for the patient.

Coordinated Care CEO Dr. Jay Fathi said the company would use “single-case agreements,” which he likened to an invoice or a bill. The hospital sends the bill to the insurer, who pays it, a system he said functions “fairly smoothly.”

Children’s officials say such agreements are quite rare and are generally limited to patients who are out of network because they live outside the local area. Resorting to single-case agreements, they said, would likely delay care for patients.

But neither Washington nor federal law specifies that insurers include certain hospitals or providers. Instead, the laws look at network adequacy this way: Does a plan include enough providers, close enough to most customers that they can get the promised services in a reasonable time within a reasonable distance?

Kreidler has begun the process of changing the rules to give his office more control over provider networks.

In a broader way, tensions exist with networks because insurers have long seen restricting the list of providers as a way to cut costs. But such moves in the past prompted backlashes and a spate of horror stories.

But now, given that the Affordable Care Act relies on competition and market forces — and prevents insurers from excluding the sick — insurers have returned to networks as a way to keep premiums down.

“I think narrow networks are a good thing,” Dranove said.

But he added a cautionary note: “If you’re going to rely on market forces, you’d better have well-informed consumers — and that’s where we have fallen short.”