As soon as Deb Emerson, a former high school teacher from Oroville, Calif., bought a health plan in January through the state’s insurance exchange, she felt overwhelmed.

She couldn’t figure out what was covered and what wasn’t. Why weren’t her anti-depressant medications included?  Why did she have to pay $60 to see a doctor? The insurance jargon – deductible, co-pay, premium, co-insurance – was like a foreign language. What did it mean? 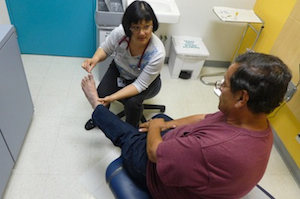 Jessie Yuan, physician at the Eisner Pediatric & Family Health Center in Los Angeles, treats diabetic patient Oscar Gonzales. Gonzalez was unaware he had been switched to Medi-Cal until Yuan informed him about the change (Photo by Anna Gorman/KHN).

Health officials have spent much of the past year promoting the Affordable Care Act and enrolling people in coverage. Now they need to help consumers understand the basics of health insurance and how to use their policies, health care providers and researchers say.

“Giving somebody an insurance card and not really telling them what that insurance is going to do for them is not going to produce the health outcomes that we all want to see,” said Brendan Saloner, a post-doctoral researcher at the University of Pennsylvania. “If the goal is to improve health and lower costs … it is really important to equip consumers with the education they need.”

Patients who don’t grasp fundamental health and insurance concepts are less likely to make smart decisions about when and where to seek care, experts said. In fact, people with low “health literacy,” as experts put it, are more likely to be hospitalized and use costly emergency rooms, according to the Institute of Medicine.

It’s a big problem. About one in 10 people in the U.S. have a proficient level of health literacy, according to an assessment by the U.S. Department of Education – that is, they could understand and use health-related information in daily activities.

And researchers at the USC Schaeffer Center for Health Policy & Economics determined that just weeks before open enrollment began last year for state and federal insurance exchanges, more than 40 percent of Americans couldn’t explain a deductible – the amount patients owe for health services before insurance kicks in. The authors found that those likely to benefit most from the health law – uninsured and low-income Americans – had the least awareness. 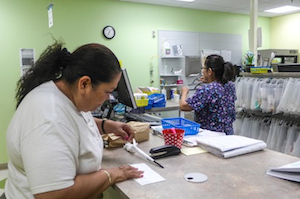 Marisela Sanchez, 60, picks up a prescription at Eisner Pediatric & Family Health Center in Los Angeles. Sanchez, who is newly insured through Medi-Cal, said the coverage is confusing and she is still trying to figure out how it works (Photo by Anna Gorman/KHN).

“There is a huge void,” said Bonnie Braun, a health literacy expert and professor at the University of Maryland School of Public Health.

Insurance is often perplexing even to savvy consumers. Acronyms abound: HMOs, PPOs, ACOs. Letters arrive in the mail saying “this is not a bill” yet appear to be just that. Some detail exorbitant prices that have nothing to do with what is actually owed.

Language and cultural barriers add to the confusion. “It’s hard to understand even if it is Spanish,” said Marisela Sanchez, 50, a new Medi-Cal enrollee from Los Angeles who has diabetes, high blood pressure and high cholesterol. “If it’s in English, it’s worse.”

Community health centers throughout the nation are seeing some of the problems firsthand.

Now they are asking why the visits that they consider preventive aren’t free and whether hospital visits are included in their plans.  They also are uncertain what specialists they can see and what medications are covered.

Jessie Yuan, a physician at the center, said patients have been confused about health insurance for a long time. The new health law “just adds another layer on top of that,” she said.

Yuan said she sees it as part of her job to give a brief orientation to new Medi-Cal patients. On a recent morning, she spoke with Oscar Gonzalez, a diabetic patient from Huntington Park, in Spanish. Gonzalez had been switched to Medi-Cal from a free county program for the uninsured.

With Medi-Cal, Yuan told her patient, over-the-counter medications like Tylenol and cough syrup aren’t free anymore.  He can get a free vision appointment but will have to pay for glasses. It will be easier to get referrals to specialists, but if he needs to change the appointment, he has to do it himself.

And instead of giving him a three-month supply of medications, Yuan explained she would write a refillable prescription that would cover several months.

He didn’t even know he had been automatically switched to the Medi-Cal program until Yuan told him. “I knew by the news they were making some changes,” he said. “But I don’t know all the rules.”

The side effects of confusion can be harmful, providers said. Sanchez, the new Medi-Cal recipient from Los Angeles with several chronic conditions, stopped taking two of her regular medications because the doctor didn’t write new prescriptions. Sanchez concluded she didn’t need them anymore – not realizing that she was supposed to get refills.

“The concept of refill is very difficult for our patients,” said Nicole Alton, the Eisner health center’s director of pharmacy. “She is just one of hundreds of people who come and don’t understand the system.”

It’s not just low-income patients or those new to insurance who need help navigating the system.

Rob Hoerntlein, 63, had purchased private insurance before but said he is stumped by his new Covered California plan, which took effect in April.

“I still don’t understand what the costs or coverage are,” said Hoerntlein, who lives near Yosemite and is a licensed real estate agent.

When his wife had some warts burned off, he got a bill for about $300. Hoerntlein said he was told that he had vision coverage but later told he didn’t. The booklet explaining his new health coverage arrived months after signing up for the policy.

To address these problems, efforts are underway across the nation by the government agencies, universities and health plans to help people understand the language of health insurance, what services are covered and how to make the best use of policies.  The University of Maryland and the nonprofit Insure the Uninsured Project in California are among those who have offered workshops or are planning to.

Health insurance exchanges are publishing glossaries of insurance terms. Insurers are holding webinars, sending out welcome kits and trying to make everything “clear, simple and easy to use,” said Susan Pisano, spokeswoman for America’s Health Insurance Plans. Pisano added that patients will take better care of themselves if they understand their benefits.

Deb Emerson, the Oroville woman who chose a policy through Covered California, said she has spent the last several months reading and asking questions about what is included in her plan and what her financial responsibilities are. She still isn’t clear why she paid about $70 to see a doctor before getting insurance – and $60 afterward.

Come next month, Emerson expects to become eligible for Medicare and will have to start all over again.

“I am worried it might be more confusing,” she said.

Say What? Many Patients Struggling To Learn The Foreign Language Of Health Insurance