SAN FRANCISCO — It’s been decades since the advertising industry recognized the need to woo Hispanic consumers. Big companies saw the market potential and sank millions of dollars into ads. The most basic do’s and don’ts of marketing to Latinos in the U.S. have been understood for years.

So when California officials started thinking about how to persuade the state’s Latino population to enroll in health care plans, they should have had a blueprint of what to do. Instead, they made a series of mistakes. 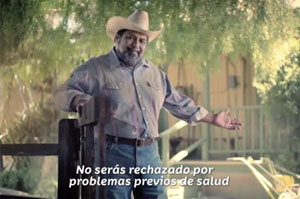 The first Spanish-language advertisement that Covered California released was criticized after a major feature of the ad – the law’s rules on pre-existing conditions — didn’t resonate with Latino audiences.

For example, one thing health policy experts love about Obamacare is that no one can be denied coverage for a pre-existing health condition. Covered California made this a selling point in almost all its Spanish ads. But that doesn’t resonate with Latinos. Many have never had insurance, never considered it.

Bessie Ramirez is with the Los Angeles-based Santiago Solutions Group, a Hispanic market research firm that has consulted for large health care clients like HealthNet, Cigna and Blue Cross.

She says another problem is that all the early TV ads end with a web address for Covered California — no phone number or physical address. She says that completely misses how Hispanics like to shop, especially for a complicated product like health insurance.

Perhaps Covered California’s biggest mistake was simply translating ads developed in English for a general audience into Spanish. Think of the long-running English-language campaign, Got Milk? At worst, a literal translation into Spanish could be a rude reference to breast milk. At best, it just falls flat. That’s what happened with Covered California’s first Spanish-language ad.

The ad features a series of people looking directly into the camera saying, in Spanish, “Welcome to a new state of health. Welcome to Covered California.”

Ad experts say that was an obvious misstep.

“To say we’re in a new state of health for California, it’s grammatically correct to translate it literally, but it doesn’t have the same nuance or cuteness that it does in English,” says Roberto Orci, CEO of Acento Advertising in Santa Monica.

He found one of the state’s follow-up ads just boring — the music, the message and the man in the ad.

“This guy was stiff as a board and … seco, which in English means dry,” he says.

If the product is chicken nuggets or milk, it might not matter to anyone but the company if Latinos buy it. But, if Latinos don’t buy health insurance, it matters to everyone.

On average, Latinos are younger and healthier than the general population. The premiums they will pay if they sign up will help cover the health care costs of older, sicker Californians. And that keeps premium costs down for everyone else.

“We don’t think we’ve done a good enough job yet,” says Peter Lee, executive director of Covered California. “Relative to our ambitions and our aspirations, we don’t stack up well enough yet, and so we’re going to be doubling down,” he says.

The state spent almost $5 million on its Spanish ad campaign last year. It plans to spend more than $8 million in the first three months of this year. Covered California has upped its market research efforts and vowed to adjust its messages. This time around, it will put a lot of emphasis on ads that say where people can go to get help in person.

“Even from day one, we thought Spanish speakers would need in-person help,” Lee says. “How important that is has really crystalized over the last three months.”

The final deadline to sign up for coverage this year is March 31. It’s not clear if Covered California can come up with a more effective marketing campaign before then.

This story is part of a reporting partnership among NPR, KQED and Kaiser Health News.