Across the country, consumers, advocates and officials are carefully watching the rollout of the health law’s insurance marketplaces as they try to evaluate what works and what doesn’t. Many people have encountered technical glitches, especially in the first hours after the marketplaces opened Tuesday. But for some of those who rushed to see what plans would be available, those snags didn’t dampen their initial enthusiasm.

Reporters for public radio stations around the country detailed some of those experiences:

‘I Had To Let My Insurance Go’

For 41-year-old Melissa Martinez of Davis, Calif., the opening of the marketplaces marked a new era. “I was diagnosed with lupus 19 years ago. I was 22, and I have seen it all. I’ve had good times and bad times,” she says.

Martinez works at home as a branding and marketing consultant. And she’s uninsured.

For the past three years, Martinez says she’s been paying out-of-pocket to see her doctors and buying her prescriptions from Canada. Martinez is single and has two kids. Because of her illness, her income was limited to $30,000 in 2012.

She says the scariest part of being uninsured isn’t having an autoimmune disease — it’s the fear of health problems she can’t anticipate — such as accidents or another serious illness. “It’s been very scary to think about you know, ‘What if?’, and ‘Then what?'” she explained.

So shortly after the Covered California’s website was made available for open enrollment Tuesday, Martinez tried to log-on. At one point, the screen went blank, but it came back, and she was able to use the site’s “shop and compare” tool.

When she finished entering her information on the computer, a handful of plans popped up. She says the silver plan looks right to her. It has a premium of about a $100 a month, and a $500 deductible.

People with different medical and financial needs may have different opinions about the affordability of the available plans. Even Martinez says there are still a lot of unknowns about the health law.

But she says she thinks the federal law is a step in the right direction, and her chronic health problem isn’t the primary reason she’s planning on buying coverage soon.

“I don’t want to be that person that ends up going to the ER every time there’s a common cold, or there’s a situation because that is just perpetuating the issue,” Martinez said. “I think if everybody gets educated about how the system works, and if everybody goes into it, we’ll have a solid base.”

‘This Is Not Explained Very Well. The Average Person Will Never Get It’

That was a cheer from Valerie Myers, a representative from Independence Blue Cross, the Philadelphia region’s largest insurer, as she handed out brochures to people at the city’s bustling Suburban Station Tuesday. Many commuters were puzzled by her excitement. 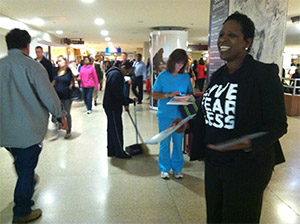 Staff at the Rising Sun Health Center in Philadelphia hand out paper applications for the insurance marketplace (Photo by Elana Gordon/WHYY).

Myers was, in fact, referring to the health care marketplaces that opened in Pennsylvania and across the U.S. Tuesday. A major part of the Affordable Care Act, the marketplaces are intended as an online sites where people can compare and shop for health plans. Independence Blue Cross, one of the insurers offering marketplace plans in Philadelphia, has been an aggressive promoter of them.

“This is not explained very well, the average person will never get it,” said Nancy Barrett, who stopped to get some Blue Cross information for her uninsured daughter.

Reactions from other busy commuters ranged from unfazed to uncaring.

“I don’t see that I need [insurance] at this time,” said 45-year-old William Addison, a bartender sitting on a bench nearby. “Maybe when I get a better job, I could probably think about it at that time.”

Meanwhile, in South Philadelphia, Kristie Glazer sat in front of her computer, eagerly preparing to log on to healthcare.gov to see what options might be available to her and her husband. The time was about 8 a.m. Tuesday.

“I’m on the website, I’m hitting apply now,” Glazer said. The page then refreshed with this message, “The system is down at the moment and working to resolve it as soon as possible and to please try again later.”

Glazer wasn’t alone, with the site not functional for many people.

“There were some slowdowns, which was expected. So what we did is we printed out the paper versions of the enrollment forms,” said Melissa Fox, director of health services at Rising Sun and its partner clinics. “So we’re ready. Whoever comes in, we can still get them enrolled and have their applications filled out.”

The paper application, however, involves more steps, including a one- to two-week waiting period, after which applicants receive information about plans and prices by mail. Elizabeth Rosario, an application assistant, had hoped that by 10 a.m. she could help people log onto the site. But she had no such luck.

“We went through the whole step of creating user name and password and at the confirmation process … boom. Shut us down,” she said, laughing. “We were like, I’m sorry, today is Oct. 1. Unfortunately the system is bombarded.”

Earlier this month, Georgia licensed Daniel Tzros as the state’s first health care navigator, so no doubt the big launch of the insurance marketplace was a big deal to him. But he hit the same hiccups when trying to sign at his Atlanta office. 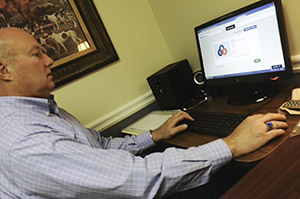 “I’ve clicked three times,” he said, but the website indicated there are too many visitors, and it couldn’t handle the traffic. He was directed to a customer service number instead, but it didn’t work either — it too was overwhelmed.

Trzos looks at the bright side.

“This is a good thing. [Consumers] are shopping; they’re looking.”

But DeKalb resident Keith Miller also got the error messages, which to him, were just the latest in a long line of frustrations.

“Eighteen months with the Affordable Care Act have not been very good,” says Miller, who has a pre-existing condition and has been insured under a federal pool that helped cover those costs.

Miller partially blames state leaders for giving the marketplace duties back to Washington.

“Had the state of Georgia had set up a state program, instead of turning it over to the federal government or really washing their hands of it , I think it would have been a lot better.”

Georgia was one of 36 states electing to let the federal government run the state’s insurance marketplace for them.  Twenty-four of those states experienced similar problems to Georgia’s on launch day.

And while the day-one technology issues were front-and-center, they’re just one issue in Georgia.

‘Do You Know You’re Saving Our Lives’

At the downtown Houston city library, officials provided two laptops for uninsured residents to use to try to sign up for coverage.

Fontenot, 63, works part-time, and is uninsured.

“So, the first question is: ‘Which best describes you: I’m looking for myself and my family or small business,'” Boswell asked.

The two got partially through the questions but then an error message appeared saying they would have to wait.

Fontenot says she’ll give it a few days before trying again. Still, she said, finding insurance is important to her.

“So I have hypertension, I’m diabetic and I have cholesterol [problems] and every time I go for a mammogram, they seem to find a lump [so] that I have to go back again, and I can’t afford to go back again,” she explained.

Insurance counselors at the nonprofit Gateway To Care were taking phone calls in English, Spanish and Vietnamese.

One counselor, Stephanie Pollock, says she recently talked to an uninsured woman who has diabetes. The woman’s husband has a heart condition.

The couple can’t afford all their medications, so they skip pills every other day.

‘Just Give It A Try’

Even though people weren’t able to actually buy coverage online this morning because of the website’s technical issues, Kevin Finder says the Connect for Health Colorado site is still useful. He logged on to it a little after 9 am.

“It guides you from the very beginning on,” Finder says, pointing at the screen. “You can see under ‘Get started,’ it says ‘Shop now,’ or ‘Are you in the right place?'”

Finder is a “health coverage guide” at Metro Community Provider Network, a clinic for low-income people in Englewood, Colo. His job is to help people use the new marketplace to find affordable coverage. He says he’s heard plenty of skepticism about Obamacare from patients, and he’s looking forward to using the website to get them past that.

“The main message we want to get out there is: Just give it a try,” Finder says. “Look and see what financial assistance you’re going to get. Take a few minutes. You see how quickly the eligibility part went? And now it says we can go on to the next step and find a plan.”

Finder says his clinic is reaching out to both existing patients and the larger surrounding community to let them know that they may have new options for getting health coverage, and that they’re there to help.

Across The Country, Consumers Carefully Weigh Rollout Of Marketplaces