Officials in Maryland’s Prince George’s County say they “will spare no time or expense” investigating the circumstances surrounding the death of a veteran public health worker who died of COVID-19 after relatives and co-workers believe she contracted the coronavirus on the job.

The probe follows a story by KHN and the Associated Press two weeks ago focusing on the worker, Chantee Mack, a 44-year-old disease intervention specialist at the Prince George’s County Health Department who union officials said was among at least 20 department employees infected by the coronavirus. The outbreak underscores the stark dangers facing the nation’s front-line public health army, the subject of an ongoing series by KHN and the AP, “Underfunded and Under Threat.”

Mack’s co-worker Rhonda Wallace, leader of a local branch of the American Federation of State, County and Municipal Employees, said she and others from the union met with two county council members shortly after the stories ran, then was told about the investigation after a separate meeting among county council members and officials.

“Your article started everything,” Wallace said in an interview this week.

County Executive Angela Alsobrooks and Health Officer Dr. Ernest Carter discussed the need for a probe at a coronavirus news conference on July 30.

“Ms. Mack’s death hurt all of us. It is the worst-case scenario that we would lose one of our employees who was there courageously working to save lives. … We believe that it deserves an investigation,” Alsobrooks said. “I want to know what happened.”

She said the county would “spare no time or expense” finding out what led to Mack’s illness and death and “if there are things we should adjust, we absolutely will do it.”

Mack, who worked in the sexually transmitted diseases program, faced health challenges and was twice denied permission to work from home in March, when the coronavirus was first appearing in Maryland. She was among 100 staffers deemed essential during the pandemic out of the more than 500 employees at the health department.

An internal union document obtained by KHN detailed a conference call by department managers in which Diane Young, an associate director, said all family health services workers were essential. Only those 65 or older, those with an “altered” immune system or with small children would be eligible to work from home, and decisions would be made case by case.

Mack’s supervisors supported her requests to work from home, but the department’s upper management rejected them, according to union documents. 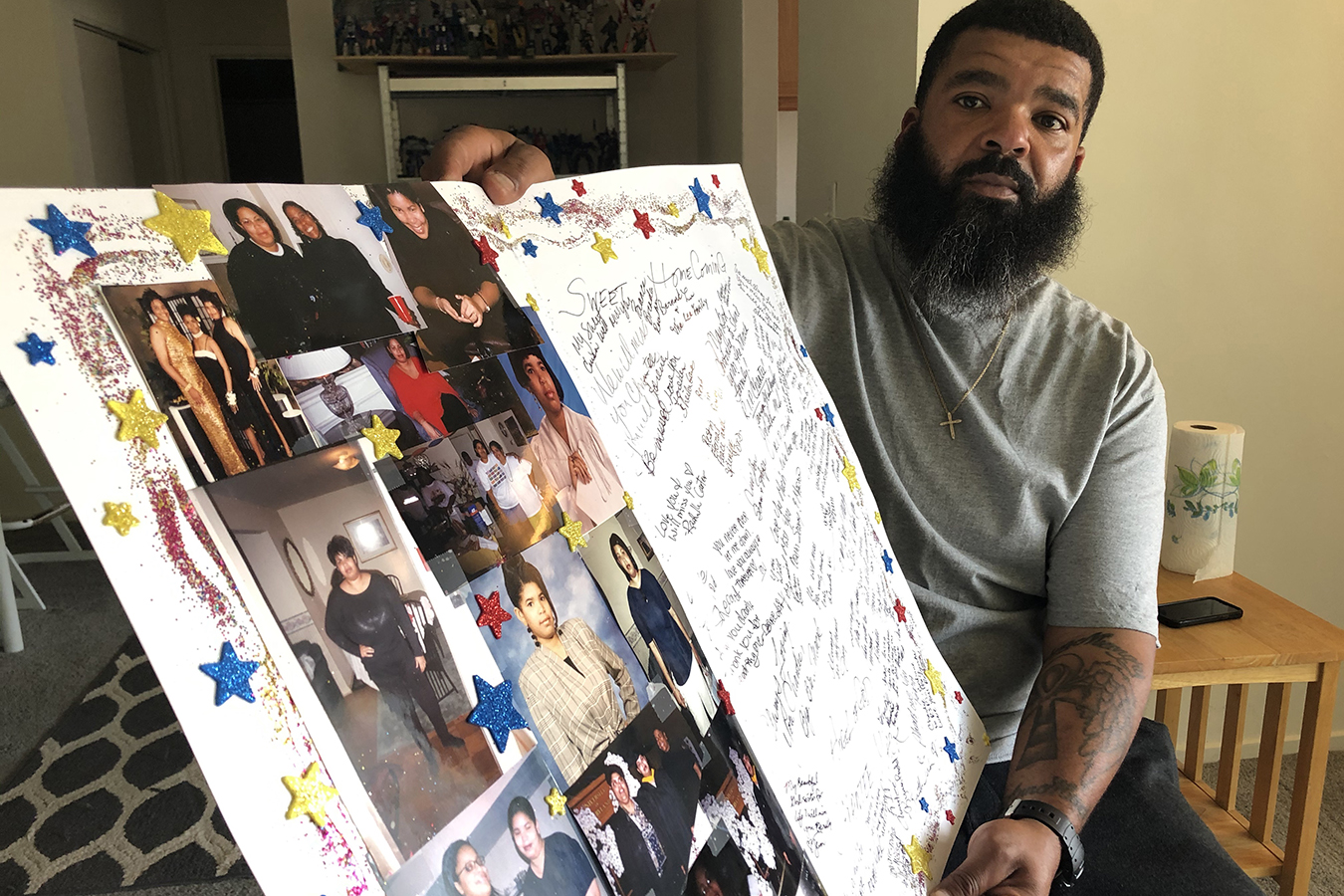 Roland Mack holds a poster with pictures and messages made by family members in memory of his sister, Chantee Mack, in District Heights, Maryland, in June. The Prince George’s County, Maryland, public health worker died of COVID-19 after, family and co-workers believe, she and several colleagues contracted the disease in their office.(AP Photo/Federica Narancio)

Some employees told KHN that the department also didn’t provide face masks and other protective gear to employees who worked in the office and with the public in the early days of the pandemic. They even held a staff meeting at which people sat close together.

Mack was exposed to a pregnant employee who later became the first in the program to be diagnosed with COVID-19. Mack was tested for the coronavirus in early April, was hospitalized mid-month and stayed on a ventilator for four weeks. She died May 11.

Mack’s younger brother, Roland Mack, wrote an email to Alsobrooks’ office with the subject line “The health department killed my sister,” saying there are “better preventative measures that could have been taken.”

Another employee spent time on a ventilator, suffered strokes and is learning to walk again.

“They failed us — the employees,” Wallace said.

At the recent news conference, Alsobrooks said the nation has gained a greater understanding of the virus since those early days.

Even as Carter said an investigation was underway, he defended the department’s actions, saying they followed guidelines at the time from the federal Centers for Disease Control and Prevention. The CDC had been encouraging social distancing by mid-March, but the White House Coronavirus Task Force and the CDC began recommending face coverings in public on April 3.

“What we did was follow principles of public health,” Carter said at the news conference. “We did everything — everything we were supposed to do during that period.”

Wallace, the union leader, said most rank-and-file employees now are allowed to telework, and another union leader said work conditions have improved.

All the while, the health department is dealing with Maryland’s largest COVID-19 caseload, with more than 22,800 cases and 720 deaths. COVID-19 has also stricken public health workers fighting the pandemic in states such as Ohio, Georgia, Oregon and California — killing a worker at a local mosquito-control district in California.

Mack’s brother said he hopes his late sister’s colleagues, and other front-line workers, heed an important lesson: “Ain’t no job worth your life.”

This story is a collaboration between KHN and the Associated Press.