If quiet negotiations between policymakers and industry bear fruit, Maryland could join the short list of states attempting to go far beyond the Affordable Care Act in improving health and limiting spending. 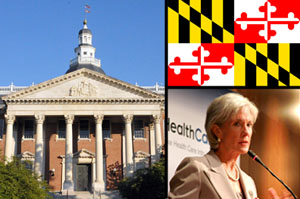 Federal officials are urging Maryland and its powerful health industry to build on the state’s unique hospital rate-setting system to develop sweeping cost controls – including those on doctors – that could be used as a model for other states.

The proposals could eventually affect nearly every aspect of the industry, and include rewarding doctors for cutting unneeded procedures and pledging the state to keep per-capita Medicare costs rising more slowly than those of the nation.

The federal Department of Health and Human Services is “sending a message that they’d like to see more from Maryland,” including a commitment to limit Medicare costs not just for hospitals but for doctors and drugs, said Baltimore health care lawyer Barry Rosen. “I don’t think they can walk into that on day one, but they may offer to get there four or five years out.”

HHS officials declined to discuss talks with Maryland. But a July 13 agency document circulated among policymakers and medical providers urges the state to offer a “transformative” plan that would control “the total cost of care,” not just hospital spending.

HHS does have some leverage to push Maryland to go big as it renegotiates the state’s waiver that allows it to set the rates for all hospitals.

Under the current waiver, Maryland hospitals collect more than $1 billion annually beyond what Medicare pays for similar care in every other state. That money disappears if Maryland flunks the current waiver test – which could happen soon if the state can’t keep the average costs of its hospital admissions down.

The fact that nobody in Maryland wants that to happen suggests that a compromise could be struck.

Key to the negotiations — and what many see as a potentially fatal obstacle — is getting Maryland’s influential hospitals to agree to a plan that reduces admissions, a primary factor in medical inflation.  At the same time, doctors are closely watching what they see as potential threats to their fees.

But some think that Maryland, with a long tradition of cost regulation and a sophisticated computer system to track medical spending, could take the lead in trying to solve one of the nation’s top economic challenges.

Maryland health secretary Josh Sharfstein “is one of the smartest guys out there,” said John McDonough, a public health professor at Harvard. “One of the reasons to watch Maryland is there is so much creative energy in the state government leadership right now.”

Everybody agrees Maryland must do something. The state’s system of setting all hospital prices for all payers is widely seen as unsustainable in its current design. Under federal law, Maryland may regulate Medicare prices — its “waiver” — only as long as the average cost per admission rises no faster there than in other states.

That limit is about to be broken, largely because the state has been so successful in shifting mildly ill people who once would have been admitted to the hospital for a night or two into outpatient treatment, state officials say. Because the people who get admitted now are sicker, this raises the average inpatient cost.

The plan is to have HHS use its regulatory power to amend Maryland’s rules (and get around the federal law), perhaps with authority granted under the ACA to launch state policy experiments. But rather than merely tweaking the waiver test, government and industry officials are thinking, or at least talking, big.

“One of the opportunities we have is not just looking at updating how we have paid hospitals for the last 35 years but really looking at health care more broadly,” said Carmela Coyle, CEO of the Maryland Hospital Association. “Nobody is talking about a rate-setting model, as we have with hospitals, for other providers. What we are talking about is: Can we more tightly link incentives across providers, especially for particular kinds of patients?”

In recent weeks, HHS, Sharfstein, rate regulators, hospitals, doctors and CareFirst have held intense discussions about building on such efforts and synchronizing them with a new waiver test. While Medicare might be the initial focus, Maryland’s tradition of also regulating rates charged to commercial insurers suggests that program would be broader.

Even though doctor rate-setting isn’t on the table, physicians are concerned about potential pressure on professional fees and liability under new cost-control efforts, said Gene Ransom, chief executive of MedChi, the state medical society.

“We typically have not been as affected by the [rate-setting commission] as it looks like we are going to be going forward,” he said.

The hospital association, leery of proposals that would cut members’ revenue, has proposed reducing Medicare rates to satisfy HHS but charging private payers to make up the difference, according to documents circulating among policymakers. That has prompted strenuous objections from CareFirst, according to people familiar with the discussions. CareFirst declined to comment.

Even so, HHS may be able to pressure hospitals into accepting painful cuts, given the state’s interest in renewing some form of the waiver.

Maryland health secretary Sharfstein, at the center of the discussions, declined to comment on the details.

“I have confidence that a modernized waiver will be great for Maryland and great for [HHS] and the federal government,” he said.