What was once a novel idea for  longterm care for the elderly — small, homey facilities of 10 to 12 residents each — is now a model cropping up around the country.

On Thursday The Green House Project— an alternative to senior institutional care created by Dr. William H. Thomas, a geriatrician and self-described ‘nursing home abolitionist’ — opened their 133th nursing home nationally and their first in Baltimore. According to Thomas, the homes are designed to emphasize quality living for seniors by creating a comfortable and independent space where residents sleep in private bedrooms, share family-style meals and have more freedom of movement  than in traditional nursing homes.

The four-unit facility on the site of the former Memorial Stadium is the first “green house” in the state of Maryland, and the first in the country to take advantage of special funding for low-income seniors thanks to a collaboration between the Robert Wood Johnson Foundation and NCB Capital Impact.

Sixty percent of the beds in the Baltimore facility, which will be run by Associated Catholic Charities, are reserved for low-income seniors on Medicaid.

Shortage of nursing homes in urban areas is a long-standing problem, according to Robert Jenkens, director of The Green House Project. According to a 2011 study in the Archives of Internal Medicine, “The relative risk of [nursing home] closure was significantly higher in zip code areas with higher proportion of blacks and Hispanics or a higher poverty rate.” 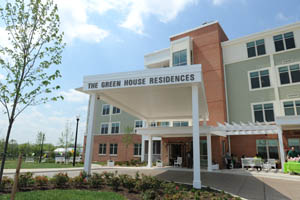 Photo by The Green House Project

In 2005 the first “green home” was built in Tupelo, Miss. and operated by Mississippi Methodist Senior Services. Jenkens says rather than the hospital-like facilities of yesteryears’ nursing homes, Green House units are small, private residences with personalized touches such as locked medicine cabinets in each room. Staffing is minimal, with the aim of building personal relationships with residents.

Jane Lowe, the team director of the Vulnerable Populations Portfolio at the Robert Wood Johnson Foundation says the facilities involve an entirely different philosophy of care. “You want people to age with dignity. You want people to have their individual needs met and you don’t want them to be institutionalized to die.”

Lowe says the foundation is gathering data to evaluate The Green House Project model. A small sample from a randomized trial at the Tupelo facility showed “significant” improvements in resident’s eating habits, social behaviors and overall quality of life.

This article was produced by Kaiser Health News with support from
The SCAN Foundation
.