There are lots of reasons why an expectant mother and her doctor might choose to deliver the baby before its due date: the health of mom or baby, the doctor’s schedule, the demands of work, or even to hit or avoid a specific birthday. But if that perfect day falls before the 39th week of pregnancy, and there’s no medical reason for an early delivery, many hospitals in Massachusetts are saying no, you have to wait. 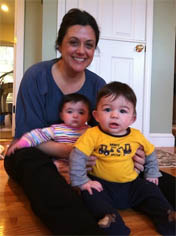 The number of early deliveries, from induced labor or C-sections, has been on the rise across the country for more than a decade now, including in Massachusetts. One reason is that we’ve come to expect that babies born “a little bit early” will be fine.

“Before the benefit of the neonatal intensive care unit, people were very conservative and would not induce or do repeat C-sections before 39 weeks,” says Dr. Glenn Markenson, the director of maternal and fetal medicine at Bay State Medical Center in Springfield. “But as they saw how well babies were doing with pediatric care, and they were getting pressured by patients because of social situations, there was a creep down from 39 weeks to 38 weeks, sometimes 37 weeks.”

Expensive neonatal care has allowed babies born very early to survive, and even thrive. Yet, this success has eclipsed the fact that babies born even a bit early are at a higher risk for a variety of problems.

“Early-term infants have higher rates of respiratory distress. There are also issues with feeding,” says Dr. Lauren Smith, medical director at the state Department of Public Health. “The most recent evidence shows that babies born before 39 weeks may also have developmental issues, so when you add up the increased risks and you weigh that against a situation when it’s purely elective, then you really can’t justify it.”

A growing number of hospitals in Massachusetts, and across the country, are saying no to elective inductions and C-sections before 39 weeks. The change is happening quietly and some new mothers don’t like it.

Lisa Coulouris sits on her hardwood kitchen floor with the Moms Club of Reading baby playgroup.

“The bottom line is women should have 99 percent of the say in what happens with their pregnancy and their bodies,” says Coulouris, who delivered twins eight months ago after complications that led to an emergency C-section. She does not like the idea of hospitals telling women they must carry to at least 39 weeks.

Doctors who are trying to end early elective deliveries say they don’t have a savings goal. Their focus right now is on reversing the trend.

“You’re already out of control of your body, so at least to know if you go to your doctor’s office and say, ‘Look, we’re at 37 weeks, and I feel like I’m ready,’ ” Coulouris says, imagining a case in which a mom would not want to wait. “To know that I would have that choice would just make me feel better. But to take it away from me just adds to the pressure of being pregnant.”

Across the room, Jennifer Brickley agrees that doctors need to take a mom’s emotional state into account, but she is bothered by the rise in what she calls “convenient deliveries.”

“In recent years it’s kind of gotten in line with the spa appointments or the hair appointments,” says Brickley, who supports timing a delivery based on medical evidence. “So I agree with what they are doing. Probably it’s a lot of costs involved that are driving this as well.”

Doctors who are trying to end early elective deliveries say they don’t have a savings goal. Their focus right now is on reversing the trend. Some hospitals have installed scheduling software that rejects deliveries before 39 weeks.

At Massachusetts General Hospital, Dr. Jeff Ecker, a high-risk obstetrician, is the gatekeeper. Each week Ecker reviews the schedule for early inductions and C-sections to see if they are all medically necessary. He says the decisions are easy when either the date is clearly a choice or the mother or baby is very sick.

“And in between are sometimes shades of gray – how high is the blood pressure, how small is the baby?” he says.

Privately, some obstetricians worry about how hospitals that stop early elective deliveries will handle cases that aren’t clear-cut.

Ecker says he tries to make sure that physicians and patients weigh the risks of an early birth against the pregnancy complication they face. He says physicians at Mass. General, when presented with the evidence, have largely stopped requesting early elective deliveries.

“Our goals are to make it virtually a never event, so there will not be truly elective deliveries less than 39 weeks, and we’re pretty much there,” he says.

In health care, a “never event” is the equivalent of a medical mistake for which hospitals may not get paid under Massachusetts law. That’s not the case yet with early elective deliveries.