In a converted gas station that is now a dental clinic in Minneapolis, Christy Jo Fogarty peers into the cap- and cavity-filled mouth of 5-year-old Valentino Cotten. 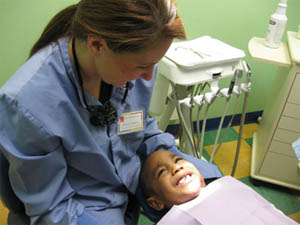 “He’s got a little primary tooth here that does not want to wiggle out,” Fogarty says to Valentino’s mother and grandmother, who are looking on.

“You’re getting so big,” Fogarty explains to Valentino. “We’ve got to make some room for those grown-up teeth.”

Fogarty is the first “advanced dental therapist” to be licensed in Minnesota since the state approved such providers in 2009. It means she is licensed to replace crowns, pull teeth, and take care of fillings. She has roughly two years more training than a hygienist but two years less than a dentist. Dental therapists are paid about half of what dentists make.

Alaska is the only other state that allows dental therapists. Legislation has been introduced in Kansas, Ohio, New Mexico, Vermont and Washington to allow dental therapists to begin practicing there. Other states are beginning to weigh the idea as well, but state dental associations are fighting the efforts.

In Minnesota, dental therapists can only practice in offices where at least 50 percent of the patients are low-income. Fogarty works under the supervision of a dentist.

“If anything happens during the procedure that I’m not sure about, I’ll just stop the procedure, grab the dentist and say, ‘What do you think?’ ” she says. “Sometimes they’ll come in and take a look at it, agree, disagree, and we’ll go from there. It’s very collaborative.”

But it wasn’t that way when Fogarty arrived six months ago. The Minnesota Dental Society fought creation of a mid-level dental provider and dentists in the clinic initially refused to work with Fogarty. Dr. Thomas Spray, who’s consulting with Fogarty on Valentino’s care, says Fogarty is working out well, but he still feels a bit threatened by the change.

“Just the idea of someone being able to do what we (dentists) do with less schooling is maybe a little unsettling,” Spray says. “If they become competitors with us, they can certainly charge a lot less than we do and might create a problem for us financially.”

Many dentists won’t see patients covered by public assistance programs because the reimbursement rates are so low. Sarah Wovcha, executive director at Children’s Dental Services, a network that includes this Minneapolis clinic, says with dental therapists, she can double the amount of care at half the price.

“This initiative is really the best that I’ve seen,” Wovcha says. “It’s cost-effective, it’s high quality, it’s taking dental hygienists and bringing them to a different level where they can fill a gap in a need for care.”

In Massachusetts, one in six residents lives in an area with a shortage of dental care, including parts of central and western Massachusetts, Cape Cod and many low-income urban communities. In addition, almost 750,000 low-income residents on Medicaid have coverage to get their teeth cleaned or pulled, but nothing more. Health care advocates are pressing the legislature to restore full dental benefits.

Dr. Charles Silvius, president of the Massachusetts Dental Society, says dental therapists are not the answer for patients who can’t get care.

“We’re almost setting up a two-tier system of care,” Silvius warns. “People who are geographically located near a dentist or have the ability to pay for it will be treated by dentists. And those who are more remote or possibly don’t have health care coverage are going to be treated by non-dentists, and I don’t think that’s moral or ethical.”

Silvius says the idea that some procedures are routine and others aren’t is misguided.

“Talking about a routine extraction can be oxymoronic,” Silvius says with a short laugh. “If you’re just trained as a technician and you get outside those parameters you may be without a rudder and not know which way to go.”

But some health care advocates say dental therapists may be an important part of the state’s effort to control health care costs.

“We’re going to need to look at a way to provide cost-effective care and look at providers that we can afford,” says David Jordan, who directs the dental access project at Boston-based Community Catalyst. “Dental therapists are going to cost less to employ.”

Jordan says dental therapists are especially effective when used in schools to catch problems before they turn into costly and painful emergencies.

Back In Minnesota, Dr. Spray and Fogarty coordinate the next steps for Valentino Cotton.

“Oh, that tickles does it?” responds Dr. Spray.

His grandmother, Bessie Pierce, lays down her own law.

“OK,” Valentino gets it.

Well, maybe a little candy is OK as long as you brush and floss. Perhaps there is some middle ground as well for the state as it looks for the best way to take care of all dental patients.