BOSTON — As Massachusetts’ state legislators put the finishing touches on a major health care cost-control bill, there is still one big question: How much could it save? A recent report claims employers and employees could see between $8 billion and $34.5 billion in savings over nine years.

“This will be a huge increase in the take-home pay for Massachusetts workers if we can get health care costs under control,” said Jonathan Gruber, an economist at MIT who wrote the study with help from Ian Perry for the Blue Cross Blue Shield Foundation of Massachusetts.  Gruber has used similar modeling to advise Republican and Democratic administrations on the costs related to health care.

The Massachusetts House and Senate are both expected to release bills soon that will establish a target for cutting health care costs, and Gruber says there’s a direct tradeoff between health care costs and wages. When premiums go up, wages don’t rise as quickly.

“What we’re saying here, by that same logic, is if we can control health care costs, workers get more,” Gruber said.

In what Gruber calls a “modest” adjustment, he says employers could save $8 billion over nine years if health care costs rose 5 percent per year, just 1 percentage point less than the expected 6 percent increase.

Under a more aggressive approach, health care costs would still rise, but only 2 percent per year. Employers would save almost $35 billion, or about $1,000 per worker, per year in that scenario.

“There are large dollars at stake here, from even fairly modest reductions in health care spending growth,” Gruber said. “Now I’m not saying those reductions are going to be easy to get, but the point is that there is large savings to be had here if we can control health care costs.”

Rachel Solem owns two inns in Cambridge and employs 37 people. She says if under these plans she must limit where her employees can get care or hike their co-pays and deductibles, then the savings aren’t so appealing.

“Keeping the cost of premiums down, that’s great. It’s a wonderful idea,” Solem said. “But how is that going to happen? I want to know the reasons and I want to know what kinds of choices we’re going to be having to make to keep those costs down.”

John Stowe, president of Lutco, a ball bearing manufacturer in Worcester, says that a 3 to 4 percent reduction in health care costs would have a major impact over time.

But Stowe wonders why the state can’t actually cut health care costs, not just aim for lower increases. He points to the 30 percent of care that many doctors acknowledge is wasteful.

“It disturbs me that we’re talking about just limiting the increases a little bit and not going to the core, and there’s plenty of room for reduction,” Stowe said.

Other employers, in the state’s health care sector, are holding up a big, flashing “caution” sign.

“We go too fast, we will all live to regret it,” said Lynn Nicholas, president of the Massachusetts Hospital Association. Nicholas “doesn’t know” how many jobs hospitals might have to cut if health care spending grows at a lower rate.

“But we do know that as hospitals have taken billions of dollars out of their expenses over the last couple of years, most of that has come in labor,” Nicholas said. “That’s where the pinch will be felt most of all.”

Economist Gruber argues it’s not certain the state will have to cut health care jobs to save money. If the focus shifts to prevention, the state will need more lower-paid community health workers, for example, but fewer expensive tests. That said, Gruber acknowledges that his report does not calculate the downside of lower health care costs.

“But what I’m saying is, the numbers here are so enormous, there is so many hundreds of millions of billions of dollars at stake that we have to take those cost control efforts seriously,” Gruber said. “And if we can compute the costs — and we can compare them, that’s fine — but we can’t say we just shouldn’t do this because we might lose jobs. That is putting our head in the sand on an incredibly important issue.” 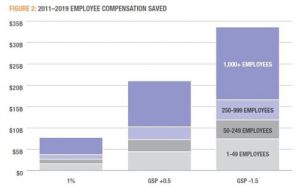