A lot of the Affordable Care Act supporters point to Massachusetts as proof that signing up the uninsured is a big, but doable task. Here, in 2013, that’s a reasonable conclusion.

But back in 2007 and 2008 things were a lot messier, and some advocates for universal coverage were worried. 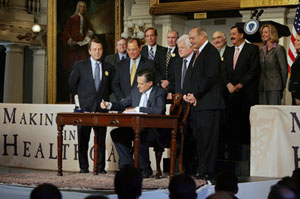 2) A dramatic increase in first enrollment put a strain on doctors and health care services at every level. When the “Connector” opened for business in late 2006, people signed up much faster than projected. Within a year there were 367,000 newly insured citizens.

3) Patients, many of whom had not had insurance for years, had a lot of problems they hadn’t taken care of and were seeking more tests, surgery and other treatment that drove up costs.

4) State budget watchers started to panic. The governor’s office kept going back to the Legislature to ask for more money and a few top lawmakers began to question whether the state could afford to fund the coverage law.

5) Employers saw an increase in workers who, to avoid the individual mandate penalty, signed up for their employer’s coverage, which increased employers’ outlays for health insurance.

Of course we don’t know if people who’ve gone without insurance around the country will behave like the newly insured in Massachusetts. There are lots of reasons why Massachusetts residents are different.  They see a doctor more often, for example, than do residents of most other states.

Today, despite rising costs, the state’s effort to cover the uninsured is pretty stable – 97 percent of the state’s 6.6 million people have it. It’s the highest coverage rate of anywhere in America.

If there’s a lesson from Massachusetts as the rest of the country starts enrolling the uninsured, it’s this: Be prepared for a rush of sick, or at least not completely healthy, people. Healthy folks will sign up later, when the individual mandate kicks in, and hopefully balance out the costs. But any estimates about how many people are eligible and how much care they have been waiting to get may not hold true.

NPR correspondent Dick Knox contributed to this story, which is part of a collaboration that includes NPR, Kaiser Health News and WBUR.