WASHINGTON — Sen. John McCain (R-Ariz.), who interrupted brain cancer treatment to return to Capitol Hill and advance the health law repeal efforts, cast the dramatic and decisive “no” vote in the early morning hours that upended the Republican effort to repeal the Affordable Care Act.

The Senate struggled late into the night to craft and then vote on a “skinny repeal” of the health law, but came up empty as the bill was defeated in a 51-49 vote that prompted gasps in the chamber. McCain’s vote was unexpected and ends — for now — the Republican Party’s effort to kill Obamacare.

Sens. Lisa Murkowski (R-Alaska) and Susan Collins (R-Maine) cast the two other Republican “no” votes in a cliffhanger drama that ended just before 2:00 a.m. Friday.

Earlier, a group of Republican senators trashed the new measure, widely dubbed a “skinny repeal,” saying it would only worsen the health care system, and they demanded unprecedented promises from their House colleagues to change it.

“The skinny bill in the Senate doesn’t even come close to honoring our promises of repealing Obamacare,” said Sen. Ron Johnson (R-Wis.). “Virtually nothing we’re doing in any of these bills and proposals are addressing the challenges, the problems, the damage done [by the Affordable Care Act].” 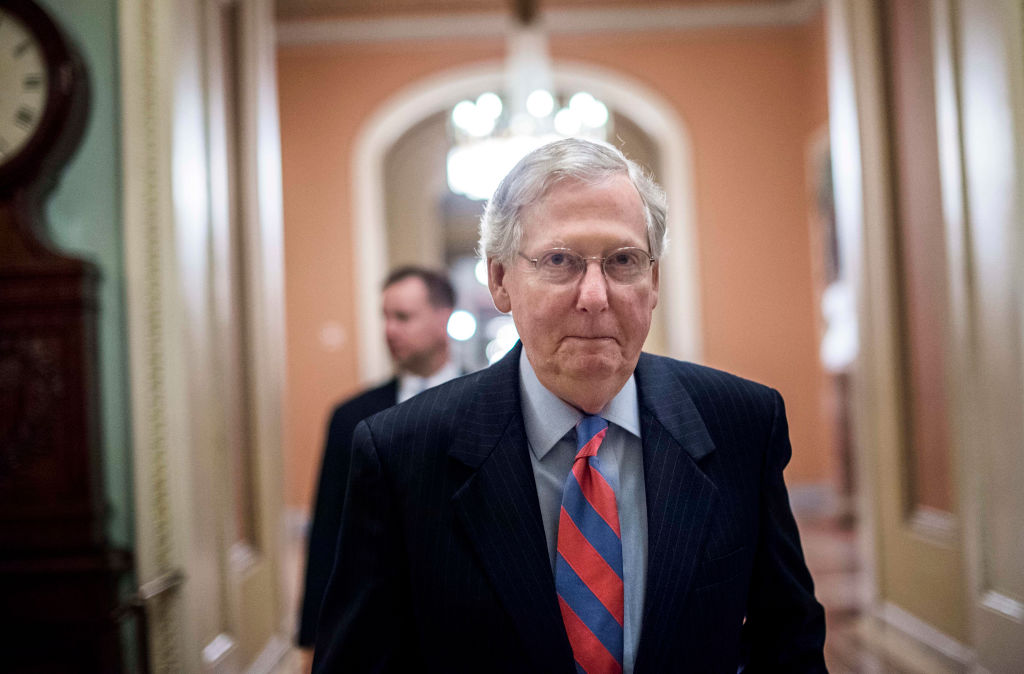 Senate Majority Leader Mitch McConnell goes on and off the Senate floor during an all-night session to consider the Republican healthcare bill. (Photo by Melina Mara/The Washington Post via Getty Images)

The slimmed-down version of the Senate bill — The Health Care Freedom Act, which the White House refers to as the “freedom bill” — included an end to key elements of the health law. Among them were rollbacks of the mandates for individuals and employers to buy health insurance, changes to waivers available under Section 1332 of the ACA that would give states more leeway to alter essential benefits in insurance plans, and a repeal of the medical-device tax.

It was not immediately clear how the bill achieved savings similar to $133 billion in the House’s version of repeal legislation. An equal or better level of savings is required under the arcane budgetary process that is being used to advance the bill, known as reconciliation.

Budget reconciliation allows the measure to pass the Senate on a simple majority vote, but requires that all of its provisions pass muster with the Senate parliamentarian as budget-related. The text of the bill posted publicly at 10 p.m. The CBO report on it began circulating on Twitter around midnight and the vote finally closed around 1:45 a.m. Friday.

One provision that had been restored after the parliamentarian initially struck it was an attempt to defund Planned Parenthood for a year. The new provision took in at least one additional abortion provider, and was expected to survive. The funding for Planned Parenthood was to be shifted to community health centers.

Keeping the attack on Planned Parenthood solidified Murkowski and Collins’ opposition to the vote.

This new iteration of the repeal comes after two versions failed to win over the 50 GOP senators needed. But even with all the rewriting and behind-the-scenes negotiation, four senators called a press conference to declare they will not vote for this “skinny repeal” unless House Speaker Paul Ryan (R-Wis.) promises not to merely pass the measure but send it to a conference committee between the two chambers, where it can be substantively altered.

“I am not going to vote for a piece of legislation that I believe is not a replacement, that politically would be the dumbest thing in history to throw this out there,” said Sen. Lindsey Graham (R-S.C.). 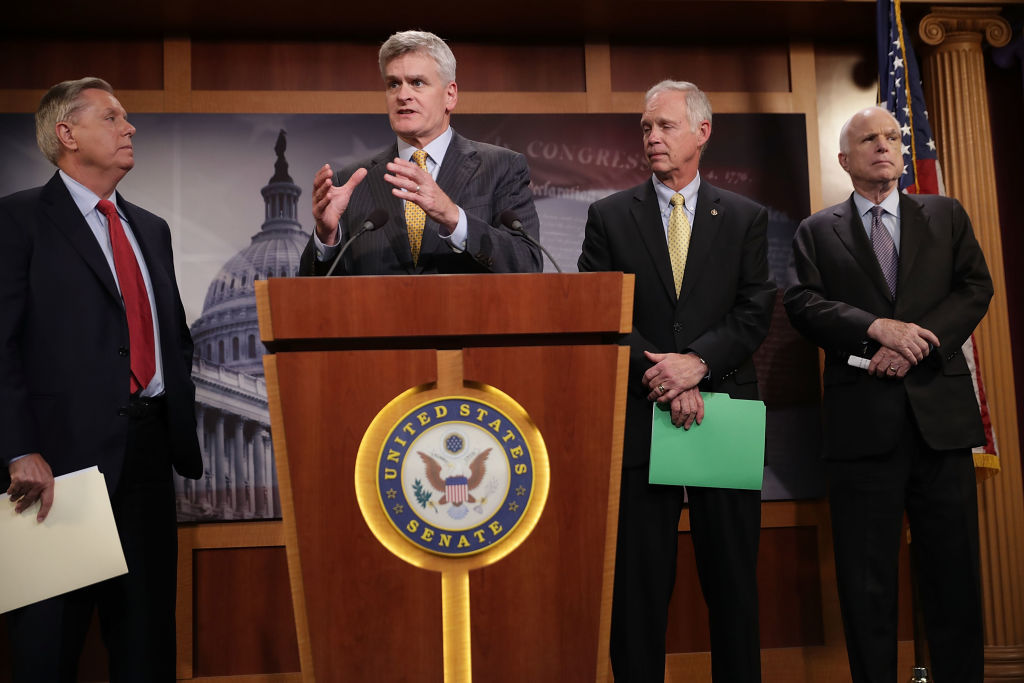 Left to right, Sens. Lindsey Graham (R-S.C.), Bill Cassidy (R-La.), Ron Johnson (R-Wis.) and John McCain (R-Ariz.) hold a news conference Thursday to say they would not support the “skinny repeal” legislation unless it was guaranteed to go to conference with the House. (Photo by Chip Somodevilla/Getty Images)

He said that he, Johnson and McCain and Sen. Bill Cassidy (R-La.) would not vote for the skinny repeal until Ryan pledges to “go to conference,” where Graham can include a measure to shift current Obamacare funding into a block-grant program for states.

His fear, Graham said, is that the House might simply take up and pass the skinny repeal in order to be done with it and notch a win in their seven-year battle against Obamacare.

Graham referred to estimates that said the repeal of the ACA mandates would “collapse the individual market” and leave the GOP to “own the problem at a time when Obamacare is collapsing.”

Ryan did release a statement with a conditional promise to take the bill to conference. Initially, it did not satisfy Graham or McCain. Graham and Johnson were persuaded, however, after a phone conversation with Ryan. McCain was not.

For their part, Democrats uniformly panned the GOP’s efforts.

“We’ve had one bad bill after another. There is no bill that is a good bill,” said Sen. Dianne Feinstein (D-Calif.). “Every bill takes people off health care. Every bill makes you pay more for less. There’s a race to the bottom, so to speak.”