Tricia Petrucci hasn’t quite reached the point where she regrets her vote for President Donald Trump. It would be understandable if she did, because Trump — and her senator, Senate Majority Leader Mitch McConnell (R-Ky.) — are trying to curb the medical services that sustain her 11-year-old stepson, who battles severe cerebral palsy.

She is aware of the irony when she chats with her Louisville neighbor, Ann Pipes, a Democrat whose own son is 11 and struggles with a disability.

“Her and I have a lot of opposite views on things, and I tease her and we joke around, but I’m not sure if I am sorry about that yet,” Petrucci said of her vote.

Benefits for both children could have been slashed dramatically under the Better Care Reconciliation Act that McConnell crafted as the Senate’s first attempt at repeal, which would have wrung about $700 billion out of Medicaid. Pair that with an end to the Medicaid expansion, and Kentucky stood to lose more than $40 billion over 10 years, with a corresponding loss of coverage, according to a Kaiser Family Foundation analysis. (KHN is an editorially independent program of the foundation.)

With Congress poised to reconvene in September, it remains unclear whether McConnell will try again to repeal Obamacare or shrink Medicaid, after several failed attempts. But perhaps a more fundamental question is whether Republican politicians who tried — and may try again — to take away often vital health care benefits from their voters will pay a political price. 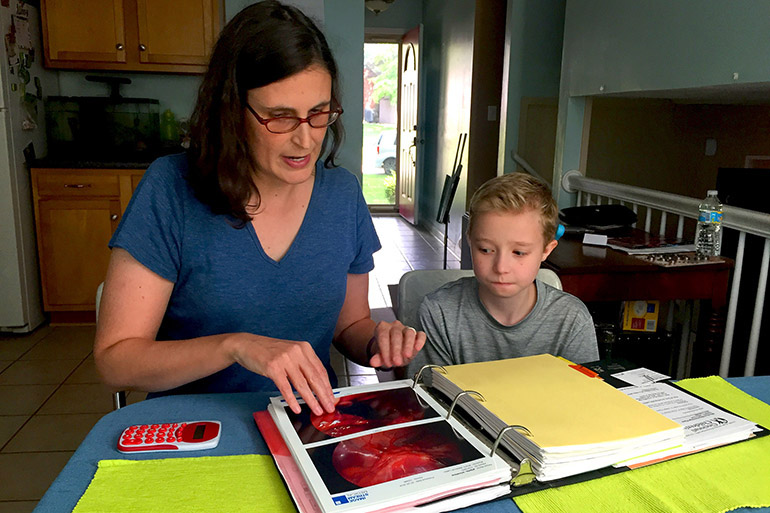 Ann Pipes and her 11-year-old son, Winslow, go over Winslow’s medical records and paperwork for aid his public school is required to give him through the Americans With Disabilities Act. Winslow has a craniofacial disorder and severe congenital hearing loss. He depends on Medicaid coverage for his care, which has included 14 surgeries since infancy. (Lisa Gillespie/for Kaiser Health News)

Amy McGrath, a former Marine fighter pilot, wants to extract just such a price in McConnell’s backyard. The Democrat is trying to recapture a House seat that flipped in 2012. Her two-minute campaign launch video — one minute on war and determination, the other on health care and her mom’s legacy — went viral with more than 1.3 million views in two weeks.

Former Kentucky Gov. Steve Beshear and other Democrats see Republicans potentially getting trapped between their anti-Obamacare rhetoric and the reality of improved health coverage.

“Trump came along, and his basic message was, ‘Do you want this horrible Obamacare, or do you want something better, less expensive, more coverage, more people covered?’ You know, offering them the moon,” said Beshear. “Of course everybody said, ‘Oh, I’ll take the moon.’”

In town hall meetings this summer, many congressional Republicans did hear loudly from constituents who would be hurt by repeal of the health law and who seem aware that “the moon” is no longer on offer as a replacement. All versions of the Republican bills would take coverage away from more than 20 million people and raise premium costs for most people. 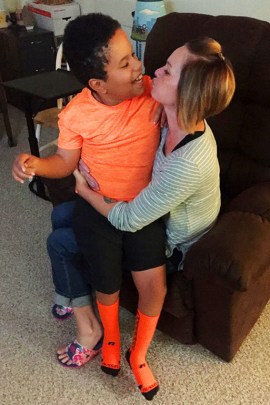 Tricia Petrucci sits with her 11-year-old stepson, Braden, in their home in Louisville, Ky. Braden has cerebral palsy and depends on Kentucky’s Medicaid program for his health insurance and care. (Lisa Gillespie/for Kaiser Health News)

For her part, Petrucci wasn’t thinking much about health care during the campaign. As a veteran, she liked Trump for his pledge to restore the military.

Since the election, though, two things changed for her. Her stepson, Braden, came to live with her and her husband in the spring — a transition that left the boy with a three-month gap in his Medicaid coverage due to a bureaucratic error. Secondly, McConnell came just one vote shy last month in his bid to start carrying out Trump’s repeal of Obamacare. It was frightening when she realized how much Braden depended on Medicaid.

“I guess my view on everything changed when it happened to me,” Petrucci said. Other reporting from the state finds Trump voters who benefited from the Affordable Care Act have similar concerns — but may not change their votes.

Beshear led one of the nation’s most successful rollouts of Obamacare coverage in 2014 by uniting the new insurance marketplace and the state’s Medicaid expansion under the umbrella of a health care exchange called Kynect.

Yet current Republican Gov. Matt Bevin campaigned in 2015 on ending Obamacare. He abandoned Beshear’s unified approach, and shuttered Kynect, which exceled technologically as other states’ exchanges stumbled badly. He shifted the 81,000 Kentuckians who bought subsidized insurance there to the federal government’s healthcare.gov marketplace.

But, as Bevin discovered, actual repeal is unappealing. Within days of taking office, he backed off his campaign pledge to roll back the Medicaid expansion that benefited 600,000 residents.

Part of the reason people in Kentucky were hostile to the ACA, even as they were benefiting from it, was branding. The ACA, like the popular Children’s Health Insurance Program, gave states the option to put their own stamp on the law. Kentucky was the only Southern state that chose to do so — and Kynect ironically became one of the ACA’s most successful brands.

“A lot of people didn’t understand that the coverage they had gotten was Obamacare,” said Rep. John Yarmuth, the Democratic congressman who represents the Louisville area. “So when Bevin said, ‘I’m going to do away with Obamacare,’ they didn’t realize that it was taking their coverage away. Now they know all of that.”

Yet, Trump and congressional Republicans are still looking for a way to repeal Obamacare. They still say it is what people want them to do.

For people like Pipes, Petrucci and Louisville resident Allison Swearingin, it’s obvious what is at stake. Swearingin has extremely painful psoriatic arthritis. Like the majority of people, Swearingin had insurance through her job, and the ACA initially had little impact on her life. She opposed the law. But when she left her last job, she needed to buy insurance through Kynect.

“There were a lot of things I didn’t think of before. It was all my own ignorance for why I was against it,” Swearingin said. “If I could look back at myself, I would smack myself and say, ‘You’re stupid.’”

“Until [voters] start feeling the pinch, all these debates about what a proposal might do tend to be temporary,” said Stephen Voss, a political scientist at the University of Kentucky. “When it doesn’t actually happen, usually voters will move on.”

For McConnell, backlash against the repeal push is perhaps more a national concern than a local one. At home, observers and even Democrats doubt he, in the Senate since 1985, would pay a price. Dewey Clayton, a politics professor at the University of Louisville, said McConnell, 75, is probably safe until he decides to retire.

“McConnell has a way of outmaneuvering [opponents] even when it looks like there’s no way,” Clayton said. “There are so many other issues out here, and he’s such a shrewd politician.”

Democrats think the repeal push could damage the GOP. But Yarmuth, who has known McConnell since the late ‘60s, said the current result — where McConnell tried and fell one vote short — is actually just about perfect for him.

“The worst thing you can do is hang a bill with 20 percent maximum support around your members’ necks,” Yarmuth said, referring to polling data that finds all the proposed repeal bills deeply unpopular. “So I don’t really think he wants a bill.”

McConnell’s office did not respond to requests for comment for this story.

The attempts at repeal appear to have harmed the re-election prospects of two Senate Republicans in swing states, Jeff Flake in Arizona and Dean Heller in Nevada. McConnell can afford to lose only two members of his 52-member caucus and still keep the majority, but in the next election, there are 10 Democrats facing races in states that Trump won.

“I think [McConnell] feels that the odds of the Republicans keeping control of the Senate in 2018 are pretty good, so he was willing to roll the dice and gamble on even losing a couple,” said Beshear. “His top priority is to be Senate majority leader, period. I mean, period. Forget about his constituency, forget about Americans, forget about anything.”

In some ways, the failed repeal vote could actually help McConnell.

“He had to try, he had to show the right-wing Republicans who were blaming McConnell for not getting what they were demanding, ‘Face reality, folks; we can’t pass this,” Voss said. “Instead of them having to believe McConnell, they’ve got it all on paper. They’ve got the actual vote count that shows, no, you cannot have what you want.”

Yet, there is a large complicating factor for McConnell: President Trump.

“Can you believe that Mitch McConnell, who has screamed Repeal & Replace for 7 years, couldn’t get it done. Must Repeal & Replace ObamaCare!” is just one of Trump’s messages to McConnell delivered via Twitter.

Such an attitude from Trump helps keep the repeal fervor high in the Republican base that backs Trump even as it further erodes popularity of Republicans in Congress.

Indeed, 67 percent of Trump voters would side with the president if it came down to a fight between Trump and congressional Republicans, according to a recent web-based interview survey of 1,000 Americans by YouGov and HuffPost. Just 7 percent would stick with the legislators.

It is a situation that has Democrats excited about Republicans facing primary challengers — as many are — who would be weaker candidates in general elections. And it leaves McConnell and his incumbents facing anger both from people in their base who despise Obamacare and those who have come to embrace it. Petrucci is the perfect example.

She still gives Trump the benefit of the doubt. But ask her about McConnell and other local GOP officials who have failed to come up with any alternative.

“As of right now, today, they would not get my vote,” Petrucci said.

This story was reported by Michael McAuliff in Washington, D.C., and Lisa Gillespie of WFPL in Louisville, Ky.

Will GOP Pay A Price For Trying To Take Health Care Benefits From Voters?