Responding to inquiries from federal officials, the California health department has released a plan it says will dramatically slash its backlog of Medi-Cal applications within six weeks. 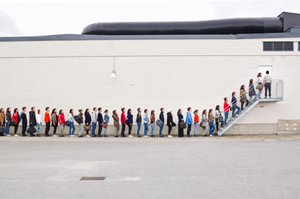 For months, the state has labored under the largest such pile-up in the country, with 900,000 pending cases reported in May—the combined result of unexpectedly high application numbers and bug-ridden computer systems.

In a letter to the Centers for Medicare & Medicaid Services on Monday, the California Department of Health Care Services said that it had reduced its application backlog to 600,000 by the start of this month. State officials also outlined a plan for technology fixes and administrative workarounds that they project will nearly halve that figure by the end of August—with most of those applications being processed within the allowed 45-day window. The letter was made public Tuesday.

If successful, the plan would provide much-needed relief for many Californians. Some have put off treatment for months while awaiting their Medi-Cal cards. (Medi-Cal is the state’s version of the Medicaid program for the poor and disabled.)

But many health advocates remain skeptical. “I don’t think this is necessarily going to be resolved within six weeks,” says Shana Charles, a health policy expert at the University of California, Los Angeles.

California was one of several states to receive a letter from the Centers for Medicare & Medicaid Services on June 27, which cited the agency’s concerns about enrollment problems. Alaska, California, Kansas, Michigan, Missouri and Tennessee were each given 10 business days to submit plans for dealing with issues ranging from updating income eligibility criteria to communication problems between state and federal computer systems.

“I think the common theme is technology, and a lack of readiness,” says Judith Solomon, vice president for health policy at the Center on Budget and Policy Priorities in Washington, DC.

Of the six, California and Michigan are the only states that had opted to expand Medicaid eligibility to a wider range of low-income adults under the Affordable Care Act. But all 50 states were required under the law to update Medicaid eligibility criteria—which once differed from state to state—to a single unified standard.

Changing computer systems to comply with this new standard has proved more difficult and time-consuming for some states than others—with many health departments resorting to manual processing as a short-term fix. Tennessee received particular criticism from the federal agency for repeated delays in developing its new computer system, and for shunting the bulk of its Medicaid applications to the federal portal in the meantime. The state has said that it expects to launch its new system by mid-September, nine months later than originally planned, according to the Centers for Medicare & Medicaid Services.

According to the letters, state computer systems in Alaska, Kansas, and Michigan have had problems taking in applications for Medicaid submitted through the federal health insurance website, healthcare.gov. Michigan, for example, is awaiting 85,000 applications that have yet to be transferred to the state from the federal portal. All three of these states submitted plans to resolve this issue or begin processing applications from federal channels within the month.

California has set up its own health insurance website, but the state computer system has encountered repeated problems in communicating with county systems for verifying eligibility. In its letter to the federal agency, the health department said it planned to keep upgrading the interface between the two systems, and to continue its efforts to process some groups of applications in bulk. Other workarounds include allowing applicants themselves to attest to their state residency while automated verification methods are being developed.

The state also reports that about 10 percent of its applications are duplicates of applications already in the system—a problem that has slowed processing and hindered the health department’s attempts to quantify the scope of its backlog. Health officials say they plan to add messages on the health insurance website to warn consumers against adding to the pile-up.

All of these fixes add up to a large, time-consuming task, which some experts believe will exceed the six-week timeframe that California has proposed.

“The technical changes have taken longer at every step of the way than anticipated,” says Jen Flory, a senior attorney at the Western Center on Law and Poverty in Sacramento. ” We have been hoping since February that the glitches would be resolved within a matter of weeks, and that hasn’t happened.”

While California continues to fight its backlog, the Centers for Medicare & Medicaid Services has turned its attention to other states’ bottlenecks. On July 9, the agency notified seven states—Arkansas, Georgia, Illinois, Indiana, North Carolina, Virginia and Wyoming—that it would be conducting reviews of ‘substantial backlog’ issues affecting those states. Some observers say that the recent spate of letters from the agency could signal the beginning of increased scrutiny on long Medicaid lines and application processing times across the country.

“They’ve been patient in the sense of not taking action right away,” says Solomon. “We’re seeing that it is time now for the states to step up.”